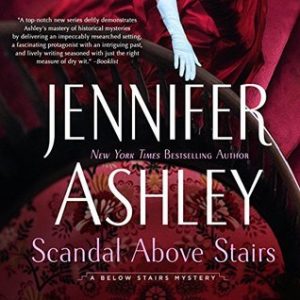 Scandal Above Stairs continues the story of Kat Halloway, a downstairs cook in the Mayfair residence of Lord Rankin. The story opens about three months after the conclusion of the previous book. Kat remains the household cook for Lady Cynthia, along with her aunt and uncle who are living with her as chaperones while Lord Rankin remains in mourning in the country. After seeing Kat in action previously, Cynthia comes to Kat with a mystery of stolen art in which her friend is being blamed. Soon, the art and antiquity thefts lead to murder, with Kat, Daniel, Cynthia, and Mr. Thanos caught in the middle.

I continue to enjoy the Kat Holloway Mysteries with this second story. The mystery is big enough to capture my interest for the entire book, and I enjoy listening to Kat pull together bits and pieces while working out her theories. I like that she doesn’t necessarily get it right the first time through, but she is intelligent enough to step back and take in all the possibilities. Working alongside Daniel, Cynthia, and Thanos provides the reader with great entertainment; each character playing a role and bringing unique talents to the table. Scandal Above Stairs also introduces new kitchen helper Tess, who has a lot to learn, but is eager and loyal.

While the mystery is interesting and exciting, the characters give the book its heart. Lady Cynthia is one of my favorites with her unconventional dress and manners. She, along with Mr. Thanos (who make an adorable pair!), sees people for who they are on the inside and ignore station, treating Kat with respect and friendship. Daniel, who remains quite the mystery himself, is kind and caring. His love for his son warms my heart. His affection for Kat gives the tale just enough romantic undertones to leave me hopeful all of Kat’s dreams for a family will come true.

Narration: Kat’s story is shared via her first person POV. The narrator provides a strong, working class female British accent, very suiting to Kat’s role. The narrator changes up her performance for dialogue. She is most successful with the other females and the working class characters. I found her “upstairs” males not as good and a bit goofy sounding – like she was trying to be “snooty.” Each character is unique, and she does a good job with age.

Kat Holloway is becoming one of my favorite characters. She is generous and kind and one of a kind. She’s quick and observant. She sees people for who they are and surrounds herself with good people. She understands her place and lives by society’s rules, breaking the ones she deems necessary. I look forward to listening to more Kat Holloway Mysteries soon.

Priceless artwork has gone missing from the home of a wealthy baronet, and his wife stands to take the blame. When Kat’s employer asks for help in clearing her friend’s name, Kat trades her kitchen for the homes of Mayfair’s wealthiest families. Soon antiques are disappearing not only from the extravagant households of connoisseurs and collectors, but from the illustrious British Museum.

As the thefts increase in frequency, Kat calls upon her friend Daniel McAdam, who has already set himself up in a pawnshop on the Strand as a seedy receiver of stolen goods. When a man is murdered in the shop, Kat must use all of her wits to see that the thieves are caught and justice is done.