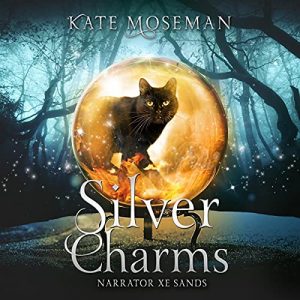 Silver Charms opens shortly after the conclusion of the first Midlife Elementals tale. To my surprise, and ultimately my delight, the story is shared with listeners via a different character than that of the first book. This time we hear from the POV of Rose, not Luella. While I thought it would be jarring to switch gears, it actually works well and enhances the overall storyline for the series. And due to the nature of the overall story, these books should be read in order, starting with Silver Spells.

Rose is a newly minted fire witch, and unlike her two best friends, doesn’t have a mentor, until Hilda Milafleur, the antagonist from book one, offers to help. I like that even though Mrs. Milafleur is invested in Rose’s progress and the success of the Sparkle Beach witches, she’s not a reformed soul. She continues to keep dangerous secrets and does not regret her previous actions. Because of the connection of fire magic between Rose and Mrs. Milafleur, we learn more about her past and reasons for her actions.

Like the first book, the story has a subtle romantic subplot. Rose connects with Mrs. Milafleur’s chauffeur, Oliver, who has secrets of his own. I enjoyed watching them dance around one another and learn to open up. Their burgeoning romance adds to the story, but never overtakes the primary plot, which sees our Ride-or-Die witches facing an unknown threat.

Rose’s sister is in the midst of a bitter divorce, and Rose thinks she may be able to help out using her magic. Additionally, a magical circus comes to town, bringing with it more elemental witches. Finally, someone is trying to steal the witches’ powers, putting the Sparkle Beach witches right in the middle. I enjoyed figuring out what was going on, and how Rose outwits the bad guy. What I don’t like is one of the actions she took in the process – it was really dumb, and as soon as it happened, I groaned out loud. I guess we’ll see in the third book if there are consequences to her actions.

Narration: Shared via Rose’s first person POV, the narrator of the book is Rose. Ms. Sands performs using her distinct voice, which I love. She’s got a deep feminine voice that is somewhat soft and slightly raspy. Ms. Sands changes her tone for the characters’ dialogue, deepening for males, adding slight accents when called for, creating a unique set of voices for the cast. My only minor issue is that Oliver is supposed to have a British accent, and while Ms. Sands gives him a unique, slightly accented voice, it doesn’t sound British to me.

In the end, I continue to enjoy the Midlife Elementals series and look forward to listening to the next exciting tale as soon as it’s out!

All Rose wants is peace, quiet, and some quality time with her lovable foster dog, Braveheart. Unfortunately, a devious elder fire witch has decided it’s time to begin Rose’s training in fire magic – and she won’t take no for an answer.

But even fire spells are no match for family drama: Rose’s sister is in the middle of a divorce, and it’s up to Rose to stop the soon-to-be-ex-husband’s plan to keep the house for himself.

With the help of the Ride-or-Die Witches, a friendly fire-setting cat, and a handsome British chauffeur, Rose must fight for her sister’s home…while uncovering a mysterious new threat to the witches of Sparkle Beach.

They say you can’t fight fire with fire, but she’s got magic to burn.