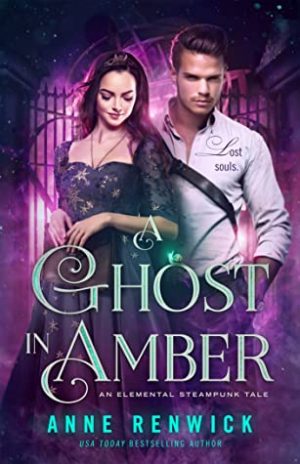 Diana is an academic with a focus on a career, not marriage. She wants the collection of snails believed to be hidden in Barcote Hall by the current lord’s decease uncle, Lord Leo Wraxall. When the All Hallows’ Eve ball is cancelled at the last minute, Diana decides to break into the manor under the cover of darkness. Imagine her surprise when it appears that she’s traveled back in time and meets Leo in a secret lab.

With A Ghost in Amber, Ms. Renwick adds a paranormal element to her already amazing Elemental Steampunk world. Even though there is time travel and a ghost, the story stays grounded in Ms. Renwick’s trademark scientific/steampunk world. I enjoy how both Leo and Diana use observation and their own knowledge to theorize what has transpired, in turn encouraging me to use my own deductive skills to try and guess as to how there will be a happy ending for this couple.

And make no mistake, A Ghost in Amber is a romance, complete with an HEA. Diana and Leo feel an immediate pull and strong physical attraction, but it’s the meeting of their minds that creates the most appeal. Neither ever wanted a spouse nor planned to marry, but suddenly both see the merits of a union. Yet, there is that pesky problem of Leo dying 23 years before the night they meet. I will say that their HEA is non-traditional, and I’m not one hundred percent clear on what goes down, but I still loved their journey.

Overall, I really enjoyed this paranormal take on Ms. Renwick’s fabulous steampunk world, just in time for the Halloween season! Leo and Diana are meant to be and so perfect for one another, and I enjoyed watching them get the chance to find love.

On All Hallows’ Eve, Lady Diana Starr is poised to uncover a lost zoological treasure when an unfortunate steam accident threatens to destroy the chance of a lifetime. Locked in a race with her arch nemesis, she must toss aside all decorum and break rules—lest he destroy her dreams. Again.

Trapped in the past and doomed to re-live the night of his murder, Lord Leo Wraxall awakens at sunset. This year, something is different. Might an unexpected time traveler who arrives at his hidden workshop help alter his cursed fate?

But destiny refuses to relax its grip; the stars cannot be realigned. As adversaries threaten to snatch away a final thread of hope, can Diana and Leo forge a new path into the future? Or will they be haunted for eternity by what might have been?