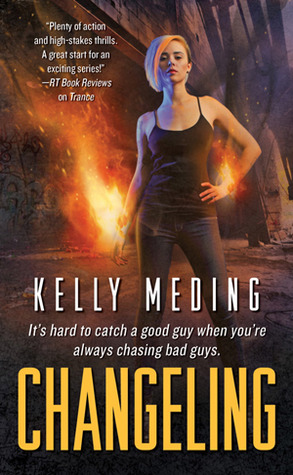 Changeling is the second book in the MetaWars series by Kelly Meding. This time around the main character is Dahlia, the newest member of the group. She’s also the youngest at age twenty-two. Her code name is Ember, because she can absorb fire.

The group is called in to help work case where human skins are being left laying around. It appears a Meta is the killer because what else could leave an empty shell with no organs, blood, or anything left behind besides an intact skin of the victims.

After a shooting that leaves Trance in the ICU and Dahlia wondering who would want to shoot Trance. The group starts getting info from an unlikely source that the bullet was meant for Ember.

Changeling adds another lay of paranatural beings to the MetaWars world. Metas can trace their powers back to a family member but a Changeling is a person born of DNA experiments in a lab. Until now, no one knew they existed but it’s safe to say by the ending of the story, we will most likely see more about them.

Ember and the gang save the day by taking down the big bad but the events only opens a bigger can of worms as to who an even bigger bad may be, known as the Overseer. I’m sure this plot line will continue to the end of the short lived series.

Changeling is an Urban Fantasy book so the budding romance in this installment ends with a happily ever right now with a possible HEA later. But since I’m a big fan of Kelly Meding and know that she likes to put her heroines through hell before seeing a happy ending, Ember’s HEA may or may not come…. Or it could just like an unconventional one.

Next up is Tempest which is told from, Ethan’s aka Tempest POV.

The second in a series by popular urban fantasy author Kelly Meding, about an X-Men-like group of young people with superpowers who must find a way to work together.

Five months ago, Dahlia Perkins was a struggling newspaper journalist whose biggest responsibility was paying her rent on time. After learning she has the ability to absorb and deflect massive amounts of heat and fire, Dahlia is struggling to find her place as the newest hero in an established team of former Rangers freelancing their abilities in post-Meta War Los Angeles.

The team’s first major case: two discarded human skins. One is a John Doe, the other was a janitor for Weatherfield R&D, a scientific research and development firm Dahlia once investigated—and she’s itching to investigate them again. The ability to use and shed another person’s skin isn’t a power any of them have encountered before, nor something any of their former Meta enemies possess. But when a third skin appears and one of Dahlia’s teammates is nearly killed by an assassin’s bullet, it’s clear someone else besides Weatherfield is targeting the Rangers—and their killer may not be Meta at all.

Reviews in the Series:
Trance by Kelly Meding (MetaWars #1)