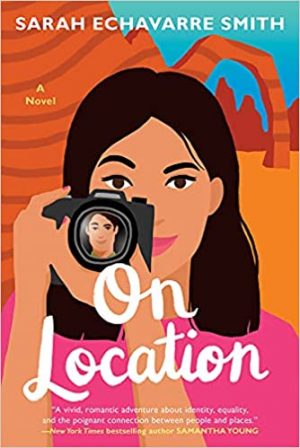 On Location is a fun, flirty, sexy romance that takes on some real social issues without being too “preachy”.

What happens when you met a sweet, hot guy on the subway? You have drinks with him of course and have a great date. But then he seems to ghost you until you met again at a work meeting. Awkward!

Alia is a producer working for a travel channel on the Expedition Network. She finally pitches her idea of a show to high the national parks in Utah and the execs agree, but they saddle her with a horrific host. A two bit reality star, Blaine.

Andrew aka Drew aka #subwaygentleman, is a freelancer who has worked as a field coordinator, camera operator, sound guy, and so much more. Since he and Alia agreed not to talk about work that one night they had drinks, they didn’t make the connections they work in the same field. So of course they are both surprised when they met again.

They get a rocky start on the job but quickly clear up the issue of Drew not calling her for another date. They still have chemistry and work great together. Alia tries to keep it professional since she’s the boss of the series. But that quickly gets blown by a night in a tent together during on of their park stops. (SMOKING HOT NIGHT IN A TENT!!!)

Blaine, the horrible host, is always late to shoots and when he does show up hours late, he’s either drunk or stoned out of his mind. Drew often has to run Blaine’s lines for him and shows he would be a better host, but he has stand fright and Blaine has connections within the Expedition Network (the only reason he got the job).

On Location deals with a budding romance between coworkers, a strong woman trying to make her mark in an all white male industry, all the while trying to make a great show to honor a favorite road trip she spent with her grandmother when she was young.

Nothing like a rocky start between enemy coworkers stuck together on location to prove that love isn’t just a ploy for ratings—it’s a force of nature.

Alia Dunn has finally gotten her big break. After years of working her way up at TV’s top outdoor travel channel, she gets the green light from network executives to bring her dream project to life: produce a series about Utah’s national parks. It’s a touching tribute to her late apong, who sparked Alia’s passion for travel and the outdoors as a kid.

Alia is thrilled—until she meets her newest crew member, Drew Irons. The same Drew she had the most amazing first date with two weeks ago—who then ghosted her. The same Drew who has the most deliciously thick forearms and who loves second-guessing her every move on set in front of the entire crew. It’s not long before the tension between them turns hotter than the Utah desert in the dead of summer, and their steamy encounters lead to major feelings.

But when the series host goes rogue one too many times, jeopardizing the entire shoot, Alia realizes that she’ll need to organize one hell of a coup to save her show—and she’ll need Drew’s help to do it. It’s the riskiest move she’s ever made. If she pulls it off, she’ll end up with a hit series and her dream guy . . . but if it all goes wrong, she could lose both.