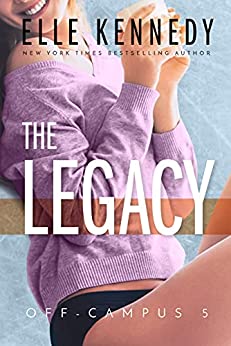 Once upon a time, there was an ordinary, four bedroom off-campus house in Hastings, Massachusetts, a fictional suburb of Boston. In that house lived four roommates. They were teammates on the Briar University championship hockey team. As popular campus icons, they were all confident, cocky even in their own way, and as each of their love interests learned, vulnerable and flawed in their own way. Each book in Elle Kennedy’s Off-Campus Series highlighted one of the four roommates as they found their soulmate and fell in love.

They were already close to graduation when we met them, and as they completed their studies and moved away, their rooms were filled with new friends and siblings. The stories of the new roommates made up the Briar U Series. From time to time, the original four, Garrett Graham, John Logan, Dean Di Laurentis, and John Tucker, would make appearances from their post-graduation, grown-up lives. Legacy returns us the Off Campus Series with a “Where are they now?” novel.

Legacy is actually made up of four novellas, each focusing on a different couple. It still reads like a novel since they are threaded together by their friendships as their lives interact with each other.

I have to believe that Kennedy wanted to write this one as much as her readers wanted her to. We loved those characters so much, but once they had graduated, we couldn’t take them back to campus again. That’s the way it is when you graduate from college. You have to go be a grown-up and go do grown-up things—realize all that potential you spent discovering while in school. Post-graduation can be a rocky transition, even when you do it with someone you love by your side. Careers take time to develop. Relationships change. Money has to be managed. Opportunities come and go. It can be the time when things that have festered finally come to light.

The main struggle of each couple in their novella is a natural extension of who we saw them as in their Off-Campus book. There’s nothing that feels forced or manufactured for the sake of pleasing publishers who wanted to capitalize on a captive audience and just put out another book. (Elle Kennedy is self-published anyway.) The only thing manufactured in Legacy is Alexander and I’m not going to spoil that little gem for you. We lost Mike Hollis to world travels with Rupi, so we needed another form of comic relief amid the grown-up concerns of our post-grads and Alexander does not fail us. There is travel, weddings, job changes, personal growth…all things that will ring true for readers. It was a joy to hang with the guys (and girls) again. Thank you, Elle Kennedy.

This brand-new installment provides the much-anticipated answer to the question: where are they now?

And a surprise pregnancy.

Can you guess which couple is which?

Come for the drama, stay for the laughs! Catch up with your favorite Off-Campus characters as they navigate the changes that come with growing up and discover that big decisions can have big consequences…and big rewards.