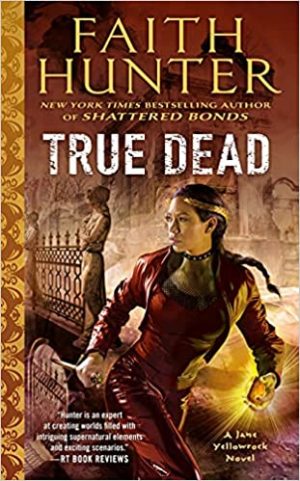 Jane Yellowrock has held a number of titles over the last few years: Skinwalker, “fanghead” killer, enemy, Enforcer, friend, sister, lover, and…Dark Queen of the Mithrans? And doesn’t that just suck. Too bad she hasn’t got a choice in the matter. Now that the head vampire of New Orleans/all of North America is dead, and some super powerful relics have chosen Jane as the only one who’s fit to wield/wear them, the job is hers. Except, now she’s no longer alone. Now, she has allies, friends, and a family to protect. Now, she has a life worth fighting for. Even if it takes declaring war on her enemies to do so.

True Dead is the fourteenth novel in the Jane Yellowrock series, and, as much as I’ve liked them all, took me the longest to get through. As I’ve come to anticipate with anything Jane, there were many consistencies, for good or ill. As usual, there is a ton of stuff going on throughout, which makes the action scenes (and there are a lot of them) really move. Also, these characters are thoroughly battle-hardened and/or very old and they don’t hold back, so readers shouldn’t expect any fights to go easy. Jane’s world is an extremely violent one, and the absence of sentimentality for anyone but her nearest and dearest is fairly rote at this point.

I think what gave me the most trouble with True Dead was the ongoing unravelling of vampire politics and the piecing together of centuries-old treachery and revenge. Every novel is a fight to the death or apocalyptic ordeal, but along the way we learn about new (or super-duper old) characters that have been manipulating things behind the scenes so there is bound to be another threat waiting to draw in air for the next combustion. It had gotten really difficult to keep up during that previous story, so while reading True Dead, I simply didn’t try. When my brain started whirling with all the who/what/where(s), I just settled in for the ride. And ended up having a great time.

As has also been the case for a while, my favorite parts of True Dead involve Jane’s closest relationships along with the personal changes she’s constantly undergoing. Jane is ever “in-progress,” and I can’t imagine her any other way. Still, there’s almost an eagerness for balance as she navigates her own missteps, and a continuously-bruised sort of hope that surrounds her quieter moments. Jane is always intriguing, but I’ve become highly invested in her and her assembled family’s (vaguely possible) happiness. Which is a pretty good reason to keep coming back.

Although there is a “Clan Pellissier, Blood-Family” record at the end of True Dead, as well as a highly amusing summation provided by Alex Younger towards the middle of the book, the Jane Yellowrock novels are far too saturated with characters and history to recommend this story as a standalone. And while I’ve expressed some issues I’ve had in the course of reading, I found a way around them, and really did enjoy True Dead as a result. It is violent and bloody and the fact that someone important will be lost—and horribly—is a guaranteed thing. There are no easy answers. No tidy HEA’s. The entire series is a “long game,” as are the machinations of many of the characters. It’s infuriating. But, it was also extremely satisfying. I don’t have any idea as to the duration of the series, but I’ll be here for it. I just might need a nap first.

Jane used to hunt vampires, but now she’s their queen. She’s holed up in the mountains with the Yellowrock Clan, enjoying a little peace, when a surprise attack on her people proves that trouble is brewing. Someone is using very old magic to launch a bid for power, and it’s all tied to the place where Jane was first drawn into the world of Leo Pellissier—the city of New Orleans.

Jane is compelled to return to NOLA because someone is trying to destabilize the paranormal world order. And because she now sits near the top of the vampire world, the assault is her problem. She will do what she must to protect what’s hers. Her city. Her people. Her power. Her crown.