A Match Made in Spain 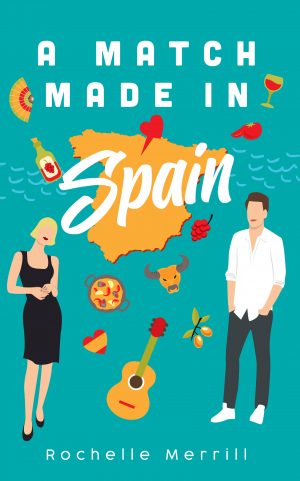 Felip’s senses came online slowly. He attempted to stretch, but he felt an added heaviness on his right shoulder.

Cecilia. She’d fallen asleep before him, and sometime during the flight, she’d shifted and her head was now resting on his shoulder. There was a little puddle of drool on his shirt. It would have bothered him if it were anyone other than her.

He grinned and had to force himself to keep his hands in his lap when all he wanted to do was push her hair out of her face and watch her sleeping peacefully.

The boy sitting behind him, who’d been eating the whole flight, leaned over their seat and was now chuckling.

“She’s asleep,” he whispered loudly to his friends, and Felip heard more chuckling.

“I am not,” she said. Her words were slurred as if she were waking from a deep slumber. She stirred and shifted, placing her hand on the armrest, which currently held Felip’s arm. He didn’t dare move. He was stunned to be so close to her, and surprised he had no desire to move away.

“Oh, God,” she said, sitting up slowly. Her eyes were wide with horror. “I’m sorry.”

“No harm done?! I drooled on you.” She rooted around in her bag and found a napkin. “I’m so sorry. Here,” she handed it to him. “I’m absolutely mortified right now.”

There was more laughter behind them, and she turned what Felip could only describe as a death glare on the boys. Their chuckling stopped and Felip couldn’t help but look back at their expressions.

The boys all sat up tall and did their best to not laugh, but the results were even more comical.

“Is something funny? Joseph? Do you have something to say?”

“That’s what I thought. Nobody in your row would like to laugh at their teacher now, would they? Because why, Tui? Why would you not want to laugh at Mrs. Galván?”

Felip bit his lip to keep from laughing as well, but he was not as successful as the boys. When a tiny little guffaw slipped out, her eyes of steel blue turned on him and the fire was back, only hotter than before.

“Do you have something to add?” she asked, her voice completely calm.

He shook his head. “No, ma’am, señora.” His heart beat hard against his ribs. It was as if he were a student again, and that annoyed him and amused him at the same time.

Her lip twitched, and he realized that she, too, was fighting back a laugh.

“Now, none of us will speak of this moment, will we?”

“No, Mrs. Galván,” the boys recited in unison.

She nodded at them and then turned to look at Felip, her eyebrow raised.

He held up his hand in surrender. “Never. I swear.”

She turned around to face forward and her lips turn up at the corners, which allowed him to breathe a sigh of relief.

This woman was intriguing. He wished their flight wasn’t about to land.

The plane hit some turbulence and the cabin bounced, eliciting frightened sounds from many of the passengers. Cecilia grabbed for the armrest, and Felip let her have it.

“It’s turbulence,” he whispered to her, now aware how important it was to her that she seem in control in front of the kids.

“Say something,” she whispered to him.

“I don’t know! Tell me something about Spain. Just move your mouth and make sounds. I need something to—”

“Ah! Vale. You are going to which city first?”

“Excellent. Eh, you will most likely see the Prado, yes? The museum?”

“I guess,” she said, her jaw muscles tense. The plane dipped low and she sucked in a breath.

Felip was worried for her. He glanced at her traveling companion, who was speaking to the young men behind them, ignorant of Cecilia’s plight.

“And you will see the Palacio Real, the king’s palace? It is very beautiful. But one thing you might want to do, if you have time, is be sure to take the boys to the armory. It’s not on the main part of the tour, but they will get to see suits of armor and weapons used by the Spanish kings. It is exciting for young men.”

“Boys and their toys,” she muttered.

“Sí,” he said with a laugh. Even when she was terrified, she made jokes.

“Ah, the great painting of El Greco is there, the cathedral, and also the sword factory where they use the Damascus steel—”

“Cecilia, are you alright?” Gabrielle asked.

“I’m fine,” she said through clenched teeth. “Felip was telling me about Madrid, weren’t you?”

She gave him the fire eyes again.

“Sí. Claro. Eh, you should try to eat churros con chocolate. Los madrileños love their churros. Of course, they are better in Barcelona, but Madrid is fine.”

Cecilia turned to him, still not smiling but her jaw had loosened. “I’m going to make a guess that you’re a little biased. You probably think everything is better in Barcelona.”

“És clar. Por supuesto.” He gave her his most winning smile and waited a few beats.

She raised her eyebrow at him, but this time her mouth was softer, almost a smile.

Once the flight attendants ushered Cecilia’s group off the plane, people began to get up and get their things. Felip stood in the aisle waiting for his turn to leave when he looked down and noticed Cecilia had left her bag. He picked it up and slung it over his shoulder, slid his messenger bag strap over his other shoulder, grabbed his bag from under the seat in front of where Cecilia had been. He’d try to find her in the terminal, or else he’d leave it with the flight attendants at the counter.

He made his way off of the plane, and looked around for Cecilia. He spotted her and the three boys near the closest men’s room and strolled in their direction.

“No, it doesn’t hurt, Mrs. Galván. I’m fine. The doctor said I have a weak blood vessel in my nose. I try to be careful, but…”

“Face-planting into the back of a seat didn’t help,” she said as she wiped at his face with a wet napkin.

Eduardo laughed and then spotted Felip coming towards them. He elbowed Tui, who stood by his side, and they both smiled knowingly.

She turned on him as though she were irritated to be interrupted, but then she actually blushed. The slight pink hue to her cheeks had him puffing out his chest ever so slightly. He wished he could do more for her than bring her a bag…cook her dinner, massage her feet, run her a hot bath…

“Thank you,” she said. She ducked her eyes, an indication of shyness he wouldn’t have expected. She took the bag from him and slipped it over her shoulder. “For… Just thanks.” She turned away quickly, and her dismissal stung.

The boys looked between them, then at each other, as if they realized a fellow man had been rebuked and were silently expressing their sympathy.

“Segura. Best of luck.” He gave one last smile to Cecilia before turning away.

Felip wasn’t usually one to mope, but he was disappointed. He’d had a nice conversation with a pretty lady on a plane and that would have to be enough. It was time he moved on. It was a shame, though, that they hadn’t exchanged any information.

A small-town ASL teacher is reluctantly captivated by the Catalonian vintner determined to woo her across the Spanish countryside. Can a match made on a tour of Spain be a fairytale second chance for this grumpy/sunshine pair?

The ink on Cecilia’s divorce papers might be dry, but she’s in no hurry to connect with another traveling businessman, especially the spatially challenged one seated beside her on a crack-of-dawn flight from San Francisco to Madrid.

Felip should be on top of the world running his family’s cava empire, however life has left him feeling unfulfilled as of late. Good conversation and a hard-won smile from his seatmate—a grumpy but lovely American hearing-impaired teacher—have him wondering if maybe fairytales are possible—or if he’s lost his mind, especially when a series of mishaps lands him in the role of the substitute tour guide for her group.

Over the course of twelve days, Felip’s irresistible charm and lust for life break down Cecilia’s carefully constructed walls as he competes with needy teenagers and pulls off a daring rescue to show her they are a good match. Will Cecilia see that their worlds are closer together than she thinks, and that faith and compromise can give them a real happily ever after?

Perfect for fans of Shipped by Angie Hockman and People We Meet On Vacation by Emily Henry. And those who miss the excitement of exploring a new place with a special someone by your side will appreciate the journey.

If R.L. Merrill is your local hard rock/metal radio station, Rochelle Merrill is her Adult Contemporary alter ego. Spinning feel-good stories to make you laugh and swoon, Ro writes romance for grown-ups who use their words (mostly) and take care of business. She’s a mom and wife who’s on hiatus from a career in education while she explores the new terrain of mid-life adventures. You can catch her walking and gardening in her neighborhood by the Bay, spoiling her rescue pets, and dreaming of attending concerts and theaters again someday. Stay Tuned for more hits coming your way…