Today we welcome back paranormal romance author Beth Linton. She’s celebrating today’s release of The Guardians’ Trust: Catrin, with a look at mermaids…

I love the story of The Little Mermaid, and I bet there are literally millions of women out there who adored Disney’s Ariel and her determination to find true love, despite the tail that separates her from her prince.

The Little Mermaid is a kind of watery Romeo and Juliet: love at first sight, lovers divided by difference, and a whole mess of issues that must be resolved if hero and heroine are ever to be together.

Luckily for Ariel, it only took the loss of her voice, rather than the loss of her life, for the love story to reach its conclusion. Ariel gets her man – and her voice back – and feuds are forgotten… Definitely a much happier ever after ending suitable for romantic hearts than Shakespeare’s play: “For never was a story of more woe, than that of Juliet and her Romeo.”

To marry her man, Ariel must overcome the issue of her species: she must get legs; she must live in a different world; she must pass as a human to gain the heart of her prince.

Err… Ariel is a shapeshifter!

Paranormal romance authors and readers LOVE a shapeshifter story – merfolk, vampires, dragons, werewolves, and other animals are all popular… the possibility is only limited by the imagination.

Excerpt from The Guardians’ Trust: Catrin 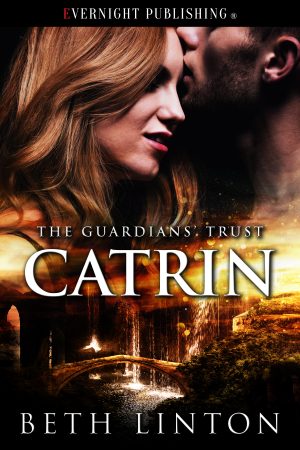 The Other Realm, The Gateway

“You have to cross!” Aderyn yelled from the bank. He held his sword before him in readiness as rain lashed and their enemies tried to breach their defensive line in relentless waves. “You’ve got to go. Now!”

Across the pool, more of Griffin’s soldiers flooded from the mountain path that led to the palace below. Their faces eerily blank, the soldiers shot arrows their way and tried to push through the Resistance fighters who were buying them the time needed to complete the Exchange.

Naked on the stones at the gateway’s base, save the quiver packed with arrows she wore across her back, Catrin notched her bow, took aim, and fired again. Sure and true, her arrow streaked through the rain. She grinned when the arrow lodged deep in the bare chest of one of Griffin’s soldiers. He crumpled forward, collapsing into the gateway’s pool, his blood staining the water crimson.

“You’re too easy a target on those rocks!” Aderyn shouted.

He was right. Exposed with the waterfall at her back, Catrin’s only shield was the rain. And it wouldn’t stop an arrow.

“It isn’t time!” she shouted. Behind her, the gateway’s song was loud and urgent over the clash of metal on the bank, but despite the attack, it warned her to wait.

Catrin ducked when an arrow streaked through the air near her face, her arms automatically lifting to shield her head.

“What are you doing?” she demanded as he ran through the thigh-high water toward her. “It’s too dangerous!”

Aderyn grunted as he reached the rocks. “The sacrifice of our warriors will be for nothing if you die. You’re a sitting duck here.”

He swiftly climbed to join her before the gateway and placed his body between hers and the soldiers desperate to reach them.

“I can. You are the Double, Catrin. You have to cross. Besides, my wife will step from the human’s world of peace into this. She will need me here.”

“You’ll be no good to her dead,” Catrin pointed out as she leaned around him to let another arrow fly.

Aderyn grunted again. “If you die before you cross then the point is moot.”

Catrin humphed. It was true. She had to live so the Exchange could take place.

Behind her, the gateway’s song remained a lyrical warning, but it didn’t urge her to cross, not yet.

“Where is she?” Catrin demanded. Until her Double was poised, as she was, upon the rocks on the human side of the gateway, the Exchange couldn’t be done. Catrin didn’t want to leave her home but she must. As her Double must come here.

“To the right!” Aderyn shouted, suddenly.

But she’d seen the archer taking aim. Catrin’s arrow found the soldier’s face and he crumpled in a heap at the far side of the pool.

And then the cry of the stones became a loud, insistent wail.

He took it and looped it over his shoulder, then accepted her quiver as she yanked it off and shoved it into his hands. Weaponless, she hesitated, trying to spot her cousin in the fight. Was he still alive? Were Brenin, Megan, and her other friends okay?

She should be down there fighting.

Catrin’s gaze jerked to his. Her lips pressed. “Win this war,” she told him. “See him dead.”

“I will,” Aderyn said solemnly. “Your future is through there.” He nodded to the pounding water behind her, swollen from weeks of rain. “Go, do this duty so Griffin dies.”

With one last look at where her family fought, Catrin plunged through the waterfall and ran as the first streak of lightning forked through the sky.

Heart pounding as loudly as the waterfall, Catrin raced through the stone tunnel and passed the shivering pop of her Double’s shadow. Only when she reached the human’s waterfall did she stop, her feet slipping on the algae-covered rocks. Behind her, in her old life, battle raged, and she prayed Aderyn had managed to get her Double to safety.

Adrenaline fueling her, Catrin thrust herself through the waterfall and blinked. Braced for conflict, she met … peace. No cries filled her ears, no arrows had her instincts flinching, no clash of swords had her reaching for her missing bow. Disorientated, she scanned the valley. The sides were lushly coated with trees and ferns, the sky above a darkening cloth peppered with unfamiliar stars. Her gaze lowered, and she drew in a shuddering breath, her new world and her rioting emotions so at odds she felt dizzy.

She searched the bank—and found him.

“Are you Aled?” she demanded.

The stranger had black hair, brown eyes, and a pleasingly angular face, while his body was covered in unfamiliar clothing. Black brows rose, probably at the urgency of her demand.

“Yes.” Aled lifted his hand, offering what looked to be a thick robe, but she was already scrabbling down the rocks, then wading to shore as though the very devil were at her back.

“What’s wrong?” Aled asked when she reached him.

Ignoring the robe he offered, she searched the face of the man she had come here to marry. The silence of this peaceful valley was too complete. Even now her people could be dying as they whisked her Double into the jungle and away from the battle.

Her fingers itched for the bow denied to her. Instead, she reached out and fisted the material covering his chest.

“Kiss me,” she demanded. She’d been asked to abandon the Resistance for this marriage, and she wouldn’t let it be for nothing. “If you are to be my husband, then kiss me—now.”

Some women are born identical – one in the human world, one in the jungle of the Other Realm. It is their fate to change places. In book six of The Guardians’ Trust series, Catrin embraces her future with the man born for her…

Suffering from survivor’s guilt, Catrin leaves a war half fought to join the Guardians – and gains a ready-made family. A warrior bent on revenge, she never expected to become a mother. To find peace, Catrin must forgive herself for surviving. Can she learn to love the woman she has become… and her arranged husband?

Divorced father of two, Aled hadn’t planned to marry again, but Catrin’s arrival forces him to face up to his painful past. For them to be a family, Aled must open his heart and learn to trust again.