A hacker witch with a price on her head, three wolf princes without a throne, and a destiny none of them expected.

Tonight’s the night. One last job and I am out of here. After years of being an indentured witch, hacking and stealing for the wolf mob, I am done. But I won’t be leaving empty handed… I’ll be taking a large portion of my boss’ cash while also relieving him of my magical marker that’s he’s held over me for years. And I won’t be leaving alone apparently, because when I break into his secret dungeon, I discover a man in chains. He’s a tall, dark, and tragically wounded, and based on the security around him, he’s pretty valuable, so I take him too.

Imagine my surprise when he opens his eyes and shouts, but not in fear—he’s carrying on about how he’s found the one. I think he might be crazy because I think he might mean me. I’d leave him behind if not for his eyes… they are full of deep pain and raise a longing within me like I’ve never known. I should be long gone, but abandoning him is not an option. Then his brothers arrive and I find that I am leaving, only in the rear of a van with my hands tied behind my back. Not exactly what I had planned.

I’m not supposed to be here, but they look at me like I am exactly what they ordered: their appetizer, dinner and dessert. All I wanted was my freedom. But there’s something about the three of them, something I can’t deny.

Captured by Wolves is the first book in a new urban fantasy series from bestselling author Fiona Starr. Fall into the world of Shifter Moon where magic reigns, wolves run wild, and prophecies foretell the destiny of all. 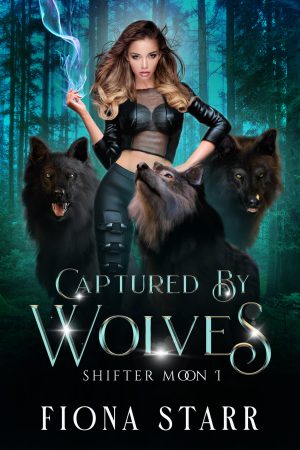 I watch on the monitors as the six men dressed in black sneak up under the cameras at the location across town. The closed-circuit security system is state-of-the-art as far as tech goes, but it’s still no match for a magic user like me.

“Ok, Witch. We’re at the first door.” Dmitry’s voice is soft and full of the contempt I’ve grown used to hearing from him over the years. None of these wolves likes working with me, and the feeling is mutual. But I’m their best kept secret—their magical security-busting burglar, the woman in the chair who sees all and opens the doors for these thieves without tripping alarms.

I close my eyes and feel around inside the bank’s security network until I locate the wire I need. With a flick of my wrist, I send the magical spark through the Internet and into the bank where it cuts the wire, killing the camera and the alarm on the door.

“First door is clear,” I whisper into the mic.

The team scurries like a bunch of ants through the door and across the screen where they stop and wait.

It’s a slow process, breaking them into the vault, because I can only hack one node of the bank’s security at a time. But it’s enough to ensure they get in without setting off any alarms.

A few more doors and a few more wires and then it’s the big safe. Sweat trickles down my back as I balance the spells required to silence the security while also unlocking and moving the gigantic steel door to the vault.

“Vault opening. Step back.” My voice is shaking from exhaustion, but we’re almost there.

The huge door swings open and the monitor fills with green light from inside the vault. The men whoop and cheer as they hurry inside and start loading their bags. We’ve been planning this job for months. It’s going to take one of the rival wolf families off the map, making room for Grigori Malovich and his crew to step in and take over.

I watch on the monitor, waiting for all of them to step inside. Then I grab hold of the table and send every ounce of my magic through the network and into the vault.

The door eases closed on silent hinges, coming to rest with a gentle clang that echoes in the empty space like an old grandfather clock. I spin the wheel and send the thick metal bars into their locked position, before the men inside realize what just happened.

“What the f*ck?” Stefan sounds confused.

“Open the vault, Witch.” Dmitry’s voice is a growl.

I slip off my headset and grab my bag, ignoring the sound of their questions that escalate into threats and pleas from the earpiece. I have nine minutes to get my marker and grab enough cash and get the hell out of here for good.

Grigori Malovich and the rest of the crew are waiting outside the bank, but they might as well be on the moon for all the help they can give. Without me, they can’t disable the alarms. Without me, he can’t do anything.

Malovich has owned me ever since he caught me stealing from him. I was sixteen, homeless, and desperate enough to take from the crime boss. It wasn’t my fault his security was shit. I could’ve hacked it in my sleep. But that cocky attitude made me careless, and he caught me fair and square.

Thanks to some fast talking and his ability to see my value, I managed to keep my head attached to my shoulders, but in exchange, I became his slave. He ruthlessly put my hacking skills to use for seven years, forcing me to work my magic, enabling him to lie, cheat, and steal his way to the top of the wolf world of organized crime.

But my part in all of this ends tonight.

I take the stairs two at a time and press my hand to the handprint scanner that calls the elevator. My palm is sweaty, but I have no choice—with everyone waiting at the bank, I will never get this kind of access again.

The elevator opens and I slip in the keycard I stole from Grigori himself right before he left for the bank. There are no buttons in the elevator, only a card slot. I slip in the card and glance at my watch.

Once they realize what happened, they will head back here for me. I don’t have much time at all.

I can’t tell if it’s the elevator or my stomach that drops as I descend. But when the door opens I don’t think. I just run. The narrow hall is like a maze, but I have memorized the way. Long hall. Left. Another hall. Left. Halfway down the next hall, then right. Door at the end of the hall.

I push the door open and step into the darkness, racing across the room to the safe hidden in the stone wall. I spin the dial on the safe, pausing on the combination digits until it unlocks with a solid click.

My marker sits in the center of the top shelf, shining in the glow of the tiny light. I laugh at how the heavy bronze coin is given pride of place, revered in a way that I’ve never been. The hunk of metal is the totem that binds my agreement, my indenture, my slavery under the monster called Grigori.

And now it is mine again.

I unzip my backpack and drop my marker inside, slinging the bag over my shoulders.

Sound comes through the door at the back of the room to my left. Something moves inside the next room, making me freeze.

I can’t risk anyone finding me here.

I tiptoe to the door and peer inside, bracing myself for an attack, a weapon, a spy.

But instead I find a man cuffed and chained to an iron bar cemented into the floor. He’s covered in grime and blood, and his hair hangs over his face. He’s breathing as he strains against the chains, so I know he’s alive.

I step closer and sense the vibrating pulse of secure energy surrounding this guy. I touch a finger to it, recognizing the zing of fae magic and feeling my entire body prickle with delicious heat. I lick the magical residue from my finger and fight to keep myself from swooning. Fae magic is as expensive and rare as it tastes.

The tattoo spanning across his wide shoulders tells me he’s a wolf. It’s a pack brand from a pack I don’t recognize. I let out a low whistle. “Wow. Someone really wants to keep you here,” I say.

The guy’s arms tense and he looks up at me, straining against the chains. His eyes meet mine and it’s like we’re transported into the ether.

We’re floating in an abyss of darkness and stars. His chains are gone and he’s watching me, reaching for me across the vastness of the divide. He closes his eyes as if he’s relieved and the absence of his gaze awakens a longing inside me that screams for him to open his eyes and look at me again.

A strange beeping pulls me back into the world. It takes a moment for me to register the sound coming from my wrist. I blink and look at my watch as if it’s an alien thing, an annoyance, a pest.

Wolf Shifters! Witches! Vampires! I can probably make a case for all the creatures, I really do love almost all of them.

PNR! I love paranormal romance with all the steam! I tend to prefer reluctant heroes and heroines.

Professor Lupin, because… wolves, but also because I am a huge fan of Harry Potter.

I think I’d love to be able to fly!

Fiona Starr lives her happily ever after in the mountains of Colorado with her hunky husband and their fleet of fur babies.