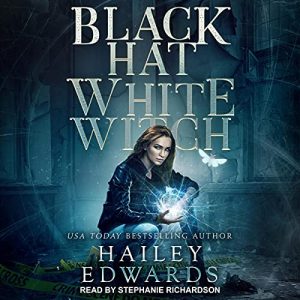 Rue is a reformed black witch who is hiding out among humans to protect her familiar, Colby. She’s made a great life for herself, but she knows it won’t last. When the Black Hat Bureau and her former partner find her, she’s drawn back into the Bureau, consulting on a serial killer case which seems to be aimed right at Rue.

Black Hat, White Witch kicks off a new urban fantasy series by Ms. Edwards. A cross between urban fantasy and mystery, the story follows Rue and her partners as they piece together a gruesome whodunit. Rue is paired with her former partner and good friend, Clay, who instantly forgives her for faking her death and hiding for the past decade, and newcomer, Asa, a demon-fae hybrid who is completely fascinated with Rue. The trio make a great team, each bringing strengths to the investigation. I love their camaraderie as they work on the case together.

As a Black Witch, Rue fed on the hearts of the horrible creatures the Bureau stopped. This fueled her magic, making her one of the most powerful agents around. But she hasn’t had a heart since the day she left the Bureau, living a clean life as a White Witch for ten years. She does this to protect her child-like familiar, Colby. I like Rue’s constant battle over her darker nature and her desire to protect Colby. I love the friendships she’s made – both human and paranormal. The potential/budding romance with Asa is a lot of fun, and I look forward to seeing how it plays out.

Narration: The story is shared via first person POV of Rue. Ms. Richardson uses a strong, upbeat feminine voice for Rue/the narrator, which suits the character and storytelling. The narrator alters dialogue, giving each character a unique voice, suiting to the age, gender, species, etc. Some voices are immediately identifiable, like that for Clay, whose voice is deeper, slower, and large, just like him. Some males, like Asa, aren’t quite as distinguishable, but still altered enough to recognize it’s not the main character. I also enjoy Colby, whose young voice sounds a bit cartoonish, which is perfect for the mythological friend.

In the end, I really enjoyed Black Hat, White Witch. The concept of the Black Hat Bureau is exciting – I wonder what types of mythical creatures are invited to work there. The story gives a lot – there was closure on the mystery, but there are still so many questions. The book gave me enough to grab my attention, and now I’m hungry for the next one to give me more.

Remember that old line about how the only way out of the organization is in a pine box?

Then her former partner had to go and shatter the illusion by showing up on her doorstep with grim tidings. As much as Rue wants to kick him to the curb, she agrees to hear him out for old times’ sake, and what he says chills her to the bone.

The Silver Stag was the most notorious paranormal serial killer in modern history, and Rue brought him down. Now a copycat has picked up where the Stag left off, and the Bureau wants her on the case. She beat the Stag once. They think she can do it again. But they don’t know she’s given up black magic, and she’s not about to tell them. White witches are prey, and Rue is the hunter, not the hunted. Always.

But can she take down the protégé of the man who almost beat her at her black witch best?

If she wants to keep her new town, her new home, her new life, then she has no choice but to find out.