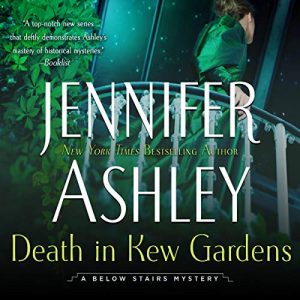 Death in Kew Gardens picks up not long after the conclusion of the previous tale. The story opens with Kat and Tess literally running into a Chinese gentleman, who later becomes the prime suspect in the murder of Sir. Jacob, the next door neighbor of the Bywaters and Lady Cynthia. Kat realizes she must figure out who killed Sir Jacob in order to save Mr. Lee. And per usual, the whodunit mystery is a bit larger and more encompassing that just one individual.

I am enjoying the Kat Halloway Mysteries immensely. Kat is a take charge, no-nonsense cook who understands her place in the world and makes the utmost best of it. She loves her life and works hard to maintain it. She also has dreams, and those, along with her daughter Grace, are what motivate her each day. I love her outlook on life and how she’s gaining new friendships with each tale.

In addition to the murder mystery, Kat must deal with some deeply personal issues when her biggest secret is discovered by a few in the household. Additionally, Mrs. Bywater finally hires a replacement housekeeper; however, she turns out to be a lazy drunk who uses people and blackmail to get her way. These aspects of the story increase tensions and give an overall urgency to the tale. I was on edge for most of the story.

Not only does Ms. Ashley weave an engrossing mystery filled with personal drama, but she addresses bigotry, giving justice a voice via Kat, Cynthia, and others. I admire those who stand up to injustice, especially in a time when women’s voices were mostly ignored. That’s what makes Mr. Thanos and Daniel such special friends to Kat – they see her (and Lady Cynthia) for their selves and not their station or who they are expected to be.

Narration: Kat’s story is shared via her first person POV. The narrator provides a strong, working class female British accent, very suiting to Kat’s role. The narrator changes up her performance for dialogue. She is most successful with the other females and the working class characters. I found her “upstairs” males not as good and a bit goofy sounding – like she was trying to be “snooty.” Each character is unique, and she does a good job with age.

In the end, Death in Kew Gardens is an engrossing mystery filled with action, adventure, and a touch of personal drama. I love how Kat’s circle of trust and friendship is growing, and how Kat more people are acknowledging what a wonderful woman Kat is.

My Ratings
Story: A-/B+
Narration: B

In return for a random act of kindness, scholar Li Bai Chang presents young cook Kat Holloway with a rare and precious gift—a box of tea. Kat thinks no more of her unusual visitor until two days later when the kitchen erupts with the news that Lady Cynthia’s next-door neighbor has been murdered.

Known about London as an “Old China Hand,” the victim claimed to be an expert in the language and customs of China, acting as intermediary for merchants and government officials. But Sir Jacob’s dealings were not what they seemed, and when the authorities accuse Mr. Li of the crime, Kat and Daniel find themselves embroiled in a world of deadly secrets that reach from the gilded homes of Mayfair to the beautiful wonder of Kew Gardens.