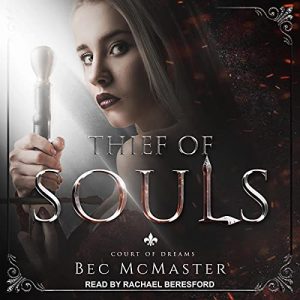 Thief of Souls is the second story in the Court of Dreams fantasy series. The story picks up three months after the conclusion of the previous novella with Zemira being tortured by her father, the of king of the wraiths, for failing to steal the Heart of the Dragon. When her father discovers another artifact that may be used to end the curse on the wraiths, he sends Zemira to the Court of Blood. Meanwhile, Keir searches for the same artifact, demanding Zemira’s help after bonding her to him in the previous book.

I have mixed feelings about Thief of Souls. It was slow moving at first and hard to follow at times. I was frustrated with Zemira and the depth of subterfuge needed to survive. At one point she was bound to complete tasks for three different fae. However, the overall mythology is interesting and complex. There is a strong romantic element and love story, but no HEA. Some of the best parts are when Zemira and Keir talk and confide in one another. And while there are sexy times, I wouldn’t label this a romance. Within the story, there is plot development, character development, and forward progression, but no real conclusion. It’s a little frustrating.

Narration: The story is primarily shared in the first person, present tense POV of Zemira. The female narrator reads with what sounds like to me a British accent, and I found it suited Zemira. The dialogue for each character is adjusted appropriately, making each character unique. The male characters are generally deeper, but sometimes sound off a bit. There is a change in the POV for a short while, and the narrator adjusts her performance perfectly. My biggest complaint is that I often had trouble distinguishing between Zemira’s internal discourse and actual dialogue.

In the end, I am enjoying the mythology despite my frustrations. I’ll probably listen to the next book, hoping it’s the last, or at least there is a solid conclusion and no cliffhanger ending.

My Ratings
Story: B-
Narration: B-

What cost will she pay to save her soul?

After failing to return with the Dragon’s Heart, Zemira is sent by her father to infiltrate the Court of Blood, in search of the mythical cauldron that contains the power of the long-lost dragon kings.

But her deal with Prince Keir bears dangerous consequences—for Keir is determined to gain the cauldron himself. Caught between two deadly enemies, can Zemira save herself? And will Keir ever forgive her for the deception she played upon him?

Reviews in the Series:
Thief of Dreams by Bec McMaster (Court of Dreams #0.5/#1) – Audiobook Review