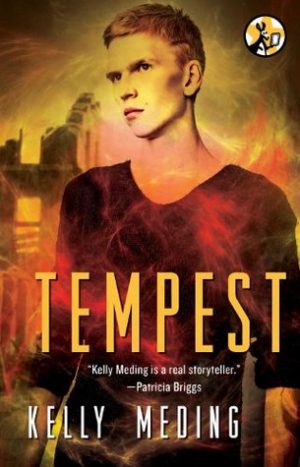 The biggest take away for me from Tempest was, Meh. The over all series plot is carrying on and interesting, but Ethan’s aka Tempest story was a little on the slow side.

He’s lived with the knowledge that his father killed his mother during the Meta Wars. He’s wanted to kill him for many years. While he and others are in New York visiting the Bane “prison” (the island of Manhattan), he sees the other side of the war through some of the ex-Banes’ eyes. The war was not black and white. He’s learning as most due with the maturity of age, that life is made up of hard choices.

There’s a big reveal and build up on things to come in the series but with there only being one book left in the series I’m not sure I want to continue. Why? Because I’m 80% sure the series was “canceled” so I’m afraid I’ll be left hanging by the end of the next book.

Since I own the next book, Chimera, I’ll most likely read it but I’m really not looking for to it. I think the new things Meding brought into the over series arc is great but again I’m afraid there won’t be a conclusion.

The public doesn’t trust them. The government wants to control them. Being a superhero has never been this hard, especially for Tempest.

Two months after the discovery of the powerful, non-Meta Recombinants, the former Rangers—Meta-powered humans dedicated to preserving the peace—have made no progress in uncovering the newcomers’ origins, or convincing the public to trust them. Newly powered Metas are popping up and causing trouble, while the former Banes—Metas who harm humans and create chaos—show no inclination that they even want to leave the island prison of Manhattan. With a presidential election looming, the hot political debate is all about Meta rights—and whether they deserve to have any.

Still haunted by the murder of so many in the Meta War fifteen years earlier, Ethan “Tempest” Swift accepts an assignment in Manhattan, working with a team that’s interviewing Banes to determine which are still threats and which have reformed. But Ethan has a personal reason for going to the island as well. Armed with questions for the Bane who just might be his father, Ethan’s quest for answers is interrupted by an unexpected assault on the island. Forced to side with old enemies to uncover who’s responsible for the devastating attack, Ethan begins to question more than just his past—he questions his place in defending a world that sees him as its enemy.