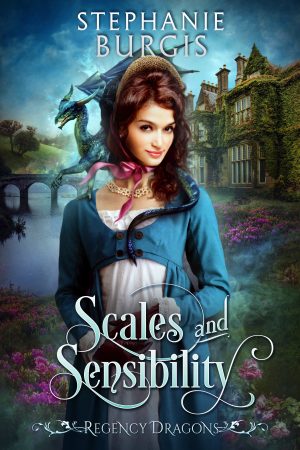 If there was anything worse for a lady of dignity than being sent head-first into a ditch, it was, of course, being witnessed flying head-first into a ditch. Even as Elinor jerked her head up out of the dirty water, panting and spitting out dark-coloured liquid that tasted appallingly like manure, she was horrified to hear the carriage pulling to a halt close by with a jangle of reins and a clatter of horses’ hooves. Worse yet, she heard a man’s worried voice—and then the unmistakable thump of feet landing on the ground.

She groaned, and wished she couldn’t glimpse her own reflection in the murky water.

Her bonnet had come off in her fall, and at least half of her hair pins had escaped. Her face and gown were both hopelessly streaked with mud—not to mention her arms, which were still planted elbow-deep in the disgusting water, a foot or so beneath the road, while the lower half of her body clung tenaciously to the dirt above. Her skirts had thereby slid well above her ankles, and the only way she could imagine to return to safety would be to wriggle backwards ignominiously, like a worm.

If only this ditch were a few helpful feet deeper, Elinor would have let herself fall all the rest of the way in so that she could swim away from the social embarrassment.

The little dragon, who had hopped off her shoulder just in time, nosed anxiously at her exposed ankles, squeaking.

“It’s all right, Sir Jessamyn.” Elinor sighed and braced herself to start wriggling. After the last six months with Penelope, she ought to have been hardened to humiliation. “I’ll just—oh!” Her voice came out as a squeak of surprise as two big, warm hands closed with shocking intimacy around her waist.

“I do beg your pardon.” It was the same voice she’d heard calling out directions to the coachman. Now the speaker lifted her up and set her on her feet with apparent ease, while Sir Jessamyn skittered back nervously. The moment that Elinor’s feet touched the ground, the hands that held her dropped away, and the man behind her cleared his throat. “I didn’t mean to presume, but it seemed the only way to save you.”

Elinor turned around…and had to stifle a groan of pure horror.

The gentleman who’d saved her was tall and broad-shouldered and only a few years older than her, with rumpled brown hair, warm hazel eyes, and a ruefully appealing smile. Even worse, he was dressed in the sort of close-fitting, forest-green coat and embroidered silver waistcoat that positively shrieked of money and taste—just like the elegant traveling carriage that had pulled up behind him.

Of course he was a romantic ideal come to life! What else could possibly make this moment more painful?

In any one of the sentimental novels that Rose had always devoured and that Elinor had always mocked, this would have been precisely the moment when the wealthy hero fell head over heels in love with the innocent young heroine and swept her away to a life of ease and romance as his bride…barring, of course, all the necessary misadventures with wicked cousins and leering highwaymen along the way.

Rose would have swooned over a scene like that.

Most of Elinor’s muddy, wet hair was plastered across her neck or pasted to the shoulders of her ruined gown. One long, slimy hank hung over her right eye and directly across her mouth. She blew it away from her face in a sigh and saw her rescuer’s lips twitch before he raised one hand to politely shield his expression.

Somehow, she didn’t think he was about to sweep her off her feet into a life of romantic luxury.

“Thank you,” she said stiffly, and stepped away from him. Her elbows, shoulder, and back felt like one big bruise; her dignity was far more battered. She turned painfully to pick up her valise, which had fallen to the ground a few feet away. “I appreciate your help, sir, but I won’t delay you any…oh,” she breathed, staring at her own bare wrist. “Oh, no.”

This time, her voice didn’t squeak. It dropped a full octave.

Despair did that, it seemed. Elinor had finally noticed what she should have realized immediately: her reticule was missing.

It had been hanging around her wrist before the accident. Now, her wrist wasn’t the only thing that was bare. So was the ground around her.

She lunged back towards the watery ditch and dropped to her knees in the dirt, heedless of any further damage to her gown.

“What is it?” said the man behind her. “What’s amiss?” And then, as she leaned over to plunge her hand into the water, “Be careful! You’ll fall back in.”

Elinor ignored him. All of her attention was fixed on the muddy water below. She couldn’t even see through the muck that filled it. She leaned further and further forward, swiping her hand desperately through it, until…

“There!” She finally felt it under her fingers: a plain cotton bag, squidged into a muddy ball.

“Wait!” Her rescuer grabbed her waist again just in time, as she began to slide back over the edge into the ditch. “For heaven’s sake. Whatever it is you’re hunting for, it can’t be worth the risk.”

The little reticule had come open in the ditch.

She stared at it. Her vision blurred.

Four shillings and sixpence, carefully saved over so many months…

Sensible, practical Elinor Tregarth really did plan to be the model poor relation when she moved into Hathergill Hall. She certainly never meant to kidnap her awful cousin Penelope’s pet dragon. She never expected to fall in love with the shameless – but surprisingly sweet – fortune hunter who came to court Penelope. And she never dreamed that she would have to enter into an outrageous magical charade to save her younger sisters’ futures.

However, even the most brilliant scholars of 1817 England still haven’t ferreted out all the lurking secrets of rediscovered dragonkind…and even the most sensible of heroines can still make a reckless wish or two when she’s pushed. Now Elinor will have to find out just how rash and resourceful she can be when she sets aside all common sense. Maybe, just maybe, she’ll even be impractical enough to win her own true love and a happily ever after…with the unpredictable and dangerous “help” of the magical creature who has adopted her.

A frothy Regency rom-com full of pet dragons and magical misadventures, Scales and Sensibility is a full-length novel and the first in a new series of standalone romantic comedies. 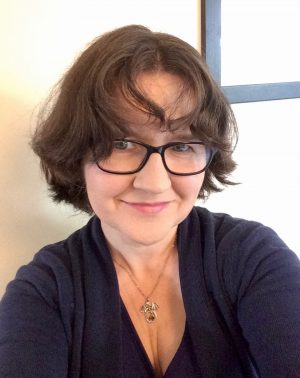 Stephanie Burgis grew up in East Lansing, Michigan, but now lives in Wales with her husband and their two sons, surrounded by mountains and castles. She writes wildly romantic adult historical fantasies, most recently the Harwood Spellbook series and Scales and Sensibility. She also writes fun MG fantasy novels, including The Raven Heir, The Dragon with a Chocolate Heart, and Kat, Incorrigible. She has had over forty short stories for adults and teens published in various magazines and anthologies. Find out more (and read excerpts from all of her books) at www.stephanieburgis.com