We are excited to welcome Cathy Pegau to the blog today. She’s here celebrating her new release, The Demon Equilibrium. Take it away, Cathy…

As a teen and young adult, I read a lot of sword and sorcery fantasy and played a number of spell-wielders in RPGs. Writing about magic has always been a thing for me, but as with any sort of world-building, there are reasons, rules, and limitations.

The magic system in The Demon Equilibrium requires two participants, the source and the catalyst. The source is the person who taps into divine power surrounding them, concentrating it. The catalyst is, as defined in the opening pages of the book, “one who provokes change or action; the spark that ignites a blaze.” Or in less dramatic terms, the partner who focuses and helps control the magic coming from the source. 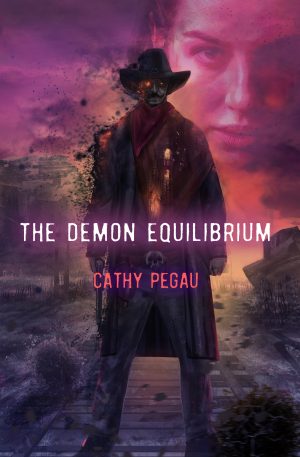 From a romance perspective, requiring a pair to successfully wield magic made sense. It’s a sort of play on the forced proximity trope: We’re in this together, whether we like it or not. I also liked the idea of women (and a few select men) being given divine power that requires cooperation with others. I wanted to show how much stronger we can be together, how we can complement each other even if we are at odds.

So what to do with this magic system….

The main characters of The Demon Equilibrium, Grace Carter and Maggie Mulvaney, belong to the Order of Saint Teresa. The Order is a world-wide, centuries-old, demon-hunting faction that was started by the followers of Saint Teresa, a young woman who single-handedly defeated a demon lord. Teresa had been “touched by the Magdalene” which gave her the ability to wield power—magic—to deal with the demons of her time.

Teresa took it upon herself to combat demons when no one else would or could. Her power was great, her desire to eradicate the scourge greater, and in the end, though she saved humanity, she had to sacrifice herself. The Magdalene realized her misstep and tweaked her gift. A single person should not bear the burden of such power. By pairing demon hunters, cooperation between sometimes very different people with power results in a greater good and stronger magic. Magic strong enough to fight demons.

But the magic doesn’t work with any source/catalyst thrown together. Matching a demon-hunting pair requires quite a bit of biometric and metaphysical charting as well as an actual trial to see if they are compatible. And while a source or a catalyst can wield their power alone to a certain degree, it is never as strong or as effective as when the two are working in sync. And sometimes it’s downright dangerous.

For Grace and Maggie, their partnership included a romance. Not an unusual occurrence in this circle. But sources and catalysts aren’t always romantically involved (Sister Thomasina and Mrs. Reynolds) and sometimes they don’t particularly care for each other at all (alluded to, but not specified in TDE). But I’m a romantic at heart, so…

The creation of a magic system that requires two people coming together wasn’t just for the convenience of creating romantic tension and pairings, though it was definitely a handy way to keep the two MCs in The Demon Equilibrium in close proximity and engaged in romantic conflict. Because that’s what we want on the romantic journey, isn’t it? The struggles of the participants makes for a sweeter HEA.

Grace Carter, a “source” of magic, has spent the last nine months searching for Maggie Mulvaney, her “catalyst.” The joy of reuniting with her partner—and her lover—is thwarted by her worst fear: Maggie remembers neither Grace nor their life together in the Order of Saint Teresa, the centuries-old organization that trained them to be the strongest demon-hunting duo in generations.

When Maggie and Grace unexpectedly come face-to-face with the demon Horde, they are forced to team up once again. As they begin to piece their lives back together, they discover that their memories have been masked by someone within the Order. Should the Horde succeed in their plan, those who have committed their lives to slay worldly demons will be relegated to little more than minions as humans are completely enslaved.

Now, Grace and Maggie must sacrifice everything, possibly even their love, and their lives, in an all-out battle to save humanity.