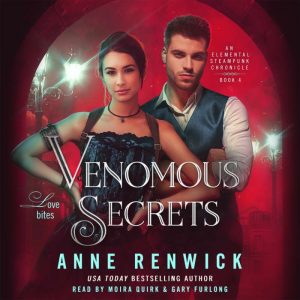 Jack Taggart, the younger brother, the spare, enjoys being a queen’s agent, especially because it keeps him away from his mischievous older brother and meddlesome mother. Cait is a unique woman who is immune to various venoms and poisons, but running tests on herself and working in a lab isn’t what she really desires. If only she could find an agent to marry, then she too could be a queen’s agent. When a mysterious woman, known as the London Vampire, starts attacking Londoners with an unknown venom, Jack and Cait’s paths cross, and it may just be the perfect match.

Venomous Secrets is an exciting adventure and heart-warming romance. Cait, sister of both Alec (MC from The Iron Fin, book 3) and the mysterious Mr. Black, is a determined young woman. She wants to find out more about who her unknown father is and why she is immune to snake (and other) venoms, and she wants to become an agent like her brothers. When she and Jack get tangled up in the investigation of the London Vampire, the pair is given a choice to marry or be kicked off the case (and never become an agent). I love the emotional roller coaster as they decide to marry. At first it’s all positives, but as other details come to light, they each start to question if long-term marriage is the best course of action. Of course, as the pair works together on the case and discuss their desires, dreams, and fears, the pair grows close, ultimately finding love.

The case of the London Vampire is complex, involving many people and taking the pair to several locations around the country. At times the story moves very quickly, and all I could do is listen and enjoy. I loved the detailed scientific discussions and hypotheses over what the vampire truly is and how she kills. There isn’t as much “steampunk tech” in this one as in previous stories, with most of the gadgets in the background, except for one important tool needed to potentially save Jack’s life. My biggest complaint is there are times when a character would be in the middle of something stressful or intense, yet would find time for lengthy hypothesizing and vetting out their thoughts. It was interesting, but when a character is in near mortal danger, they shouldn’t have time for lengthy internal monologues. It would take me out of the immediacy of the situation.

Narration: The story is shared from the alternating third person POVs of Cait and Jack. Both narrators do a good job, although I preferred Ms. Quick’s work a tad more, especially when portraying characters of the opposite gender. Ms. Quick uses a neutral British accent for the narrator, altering her voice for the various character dialogue. Her performance is spot on for Cait as Ms. Quick alters her accent to match that of a Glaswegian. Mr. Furlong also used a neutral narrator and his performance of Jack was excellent. I didn’t care for his female characters as much, sometimes they could be a bit overdramatic. He did work in the appropriate accents for each character and made each unique.

In the end, Venomous Secrets is a wonderful addition to Ms. Renwick’s Elemental Steampunk world. I enjoyed the detailed scientific discussions and the tie-in with characters from previous stories, and I look forward to finding out what happens next in this exciting series.

Cait McCullough, venom expert, is trouble personified. Bored with exploring the possibilities of her unique biology in a laboratory, she longs for excitement. And investigating a vicious fanged creature who stalks its victims by lamplight in darkest London offers the perfect opportunity. Working with a handsome, unmarried agent? A delightful bonus.

Jonathan “Jack” Tagert battles enemies shrouded in darkness. While chasing suspects was once second nature, impending blindness threatens his line of work. The timing couldn’t be worse. When a deadly attack upon a lord at his brother’s engagement ball connects to a string of odd murders, the hunt begins for a seductive predator.

Bound together by societal scandal, they must trace the creature’s past. Every clue spirals them deeper into peril as they struggle to separate fact from myth. As the venomous truth slithers near, the fight to survive draws Jack and Cait ever closer. With lives on the line, and time running out on Jack’s dimming vision, the pair must untangle a mystery to stop the body count from rising.