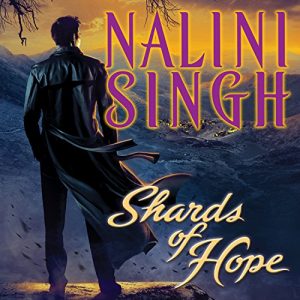 Having originally read Shards of Hope in 2015, I took the opportunity to listen to the audiobook for my re-read as part of Books of My Heart’s 2021 Psy-Changeling read-along. This was my first time listening to a Psy-Changeling book, and I’m glad I did. I also want to mention that I jumped right into Shards of Hope without going back to the start of the series. After I finished listening and reviewed my notes, I went back and read my original review, and I have to say, I still feel pretty much the same way. Much of this review comes from my 2015 review, but I’ve edited and adjusted it as needed.

Opening shortly after the conclusion of the previous book, Shards of Hope shares the story of a post-Silence world, one which sees the fierce and deadly Arrows trying to adapt. Arrow leader Aden, along with one of his top commanders, Zaira, is taken captive by an unknown group, resulting in a temporary disconnect from the PsyNet. This opens up the opportunity for Aden to learn from a Changeling pack and begin to implement post-Silence ideas into his “Arrow pack.”

Overall, I enjoyed Shards of Hope, bringing the Psy and whole world from Silence into post-Silence. I enjoyed Aden and Zaira’s romance and feel their pairing a good one. The relationship is slow moving (which is expected being a Psy-Psy pairing), but their love began well before the start of this book, even before the fall of Silence – they just didn’t realize it. Individually, I found both Aden and Zaira strong and likable characters. I was interested in their personal growth and development, which is well-written. But at times, I feel their romance took a backseat to the rebuilding of the Arrows and the other subplots. I also found that Ms. Singh uses a lot of repetition in her writing, continually mentioning the same feelings and personality traits or how each was treated by their parents.

Ms. Singh spends a lot of time bringing readers inside the Arrows and running us through the different worldwide groups and groundbreaking changes. Aden is a wonderful leader and the perfect man to take this group of the most damaged Psy into the post-Silence world. Taking actions to mirror that of an alpha of a changeling pack, Nalini is successful in creating a relatable group for the reader.

Similarly, I enjoyed reading about the familiar powerful players work through misunderstandings generated by the mischievous Consortium. Knowing that this dangerous and dark group would have been successful in its endeavors to throw the world into chaos just a few books ago, makes the changes all the more rewarding for longtime readers of the series. As someone who has read well beyond Shards of Hope, it was surprising to see the kernels of future plots, as well as how some of the plots have yet to completely develop.

Narration: Angela Dawe does a wonderful job with her performance. The story is shared from multiple POVs, and Ms. Dawe uses the same feminine narrator throughout. She alters the dialogue for every character, making each entirely unique. She transforms her voice so completely from character to character that it sounds like a full cast. She handles various accents, ages, and genders seamlessly. I was also impressed with the amount of emotion she infuses into her performance, as well as how she fits her voice to the actions – like whispering entire covert conversations.

In the end, I enjoyed my re-read of Shards of Hope, and find it a worthy entry as one story in a huge series.

Awakening wounded in a darkened cell, their psychic abilities blocked, Aden and Zaira know they must escape. But when the lethal soldiers break free from their mysterious prison, they find themselves in a harsh, inhospitable landscape far from civilization. Their only hope for survival is to make it to the hidden home of a predatory changeling pack that doesn’t welcome outsiders.

And they must survive. A shadowy enemy has put a target on the back of the Arrow squad, an enemy that cannot be permitted to succeed in its deadly campaign. Aden will cross any line to keep his people safe for this new future, where even an assassin might have hope of a life beyond blood and death and pain. Zaira has no such hope. She knows she’s too damaged to return from the abyss. Her driving goal is to protect Aden, protect the only person who has ever come back for her no matter what.

This time, even Aden’s passionate determination may not be enough—because the emotionless chill of Silence existed for a reason. For the violent, and the insane, and the irreparably broken . . . like Zaira.

Reviews in the Series:
Psy-Changeling series