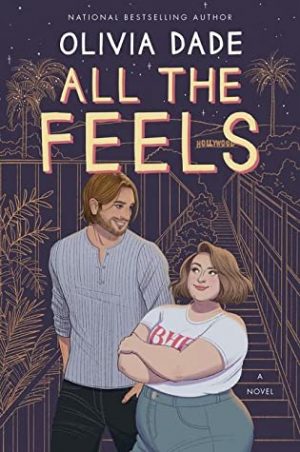 All the Feels
Author: Olivia Dade
Reviewer: Jen
Rating: A

Alex, a famous, good-looking actor on a popular TV series, has a reputation for causing trouble. After a bar fight while filming the series finale, the show runner hires Lauren to be his minder, keeping Alex on the straight and narrow and out of the media. Lauren hoped to take a few months off after leaving her high-stress job in a hospital ER, but when her cousin insists she help him by keeping Alex in line, she finds she can’t say no. Note: although the first half of All the Feels overlaps in time with the first book in the series, Spoiler Alert, the story is completely standalone.

I literally have all the feels for All the Feels. It is such a wonderful romance; I laughed out loud, my heart broke, and my spirit swooned. I adore Lauren and Alex together. They work so well because they take the time to know one another, to respect themselves and each other. Although each has flaws, both are willing to admit when they are wrong and willing to work on the hard parts. They make mistakes and move past them, growing stronger. They truly are better together, and I love that Lauren allows herself the joy of Alex’s affections. I love that Alex does anything for those he claims as his, but is learning to protect himself as well.

Alex has ADHD and author does a good job of portraying his condition; we see it in little actions like his need to talk and how he can’t sit still. With that said, Alex diligently takes his medication and is self aware, knowing when things are going sideways. He’s a good listener and is attentive. I appreciate how he’s honest with himself that Lauren isn’t traditionally attractive, yet, like with a Picasso, he’s drawn to her face; it’s interesting and captivating.

Lauren wants only good for Alex, so she wants to remove herself from situations that she knows will cause problems, like when someone inevitably offends her, so he won’t go ballistic. She isn’t hard on herself, but feels she’s realistic. I adore watching her learn to stand up for herself, and seeing her beauty through Alex’s eyes.

All the Feels is filled with ups and downs, growth and reflection. There were times my heart was heavy because the pair were not in sync, then other times, I was over the moon because they are so perfect together. I love that I am witness to raw and honest emotions. All the Feels is a wonderful romance and one of my favorite books of the year.

Alexander Woodroe has it all. Charm. Sex appeal. Wealth. Fame. A starring role as Cupid on TV’s biggest show, God of the Gates. But the showrunners have wrecked his character, he’s dogged by old demons, and his post-show future remains uncertain. When all that reckless emotion explodes into a bar fight, the tabloids and public agree: his star is falling.

Enter Lauren Clegg, the former ER therapist hired to keep him in line. Compared to her previous work, watching over handsome but impulsive Alex shouldn’t be especially difficult. But the more time they spend together, the harder it gets to keep her professional remove and her heart intact, especially when she discovers the reasons behind his recklessness…not to mention his Cupid fanfiction habit.

When another scandal lands Alex in major hot water and costs Lauren her job, she’ll have to choose between protecting him and offering him what he really wants—her. But he’s determined to keep his improbably short, impossibly stubborn, and extremely endearing minder in his life any way he can. And on a road trip up the California coast together, he intends to show her exactly what a falling star will do to catch the woman he loves: anything at all.