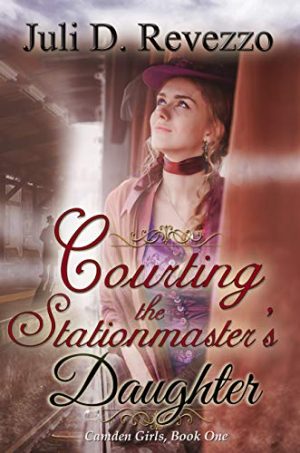 Courting the Stationmaster’s Daughter is a sweet historical romance. The novel deals with the typical issues of different classes coming together through Honorine’s mom, but they are pretty easily overcome when she sees just how much Shane adores Honorine. Overall, Courting The Stationmaster’s Daughter was a clean, sweet historical romance perfect for those looking for love story with chemistry and well placed kisses, but who don’t want ripped bodices and various other sex scenes. I would have been completely fine with my tween or teen reading this book.

There were, in my opinion, some plot holes, but not enough to cause any major issues. For example (without giving spoilers), the only major conflict preventing Honorine and Shane getting together felt forced. As the second in command, it was hard to believe he had never dealt with the issues presented in this story before. I understand that the author was trying to show how loving Honorine changes Shane, but it felt unnecessary to me. Also Honorine’s swearing off of men a couple different times also felt forced and as if she didn’t trust Shane, which simply didn’t fit the narrative.

If you’re looking for a nice escape into a town outside London where the townspeople have good hearts and show that coming together can heal a myriad of wounds, you’ll want to pick up this book.

After Honorine Camden is jilted, leaving her stunned and sparking a scandal in her tiny London borough of Wallflower, she’s devastated. But when she overhears her father, the stationmaster, talking about arranging a party for their newly-minted underground railway station, she volunteers to help. Although she’s intrigued with the handsome assistant stationmaster, Shane MacIntyre, she never expects to fall head-over-heels in love with him. Unfortunately, one tragic accident might derail everything.