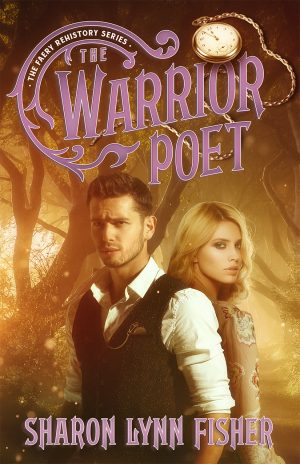 The Warrior Poet is the conclusion to Sharon Lynn Fisher’s Faery Rehistory. While each book highlights the love story of one couple, it’s an adventure fantasy series you’ll want to read in order. The books build upon each other in the final battle for the fate of Ireland. In the previous books, we were led to believe this was a new history, a “rehistory” if you will, of Ireland. In The Warrior Poet, we break through to the present day and learn that it’s a parallel world with its own history. Instead of being set entirely in the late 1800’s, poet William Butler Yeats—yes, THAT Yeats, utilizes the time-traveling skills he picked up in the last book, The Raven Lady, to move between our present and his version of 1800’s Ireland. I laughed out loud when Fisher threw in an Outlander reference because every reader was going to go there even though the books are very different. To me it was more Brigadoon, more colorful, more whimsical despite battles for life and freedom.

Yeat’s love interest is Neve Kelly, probably the most relatable character in the entire series since she is from our present day with present day speech, dress, and expectations. It’s even a little comical as she tries to fit into 19th century Ireland, commenting on clothing and manners. As before, Fisher has done her homework and while continuing a story that’s already in motion, her background research is solid. You have to know the history before you can rewrite it so that it’s plausible and the reader can suspend their disbelief.

I especially appreciated her making William Yeats into a warrior. If you’ve ever looked at a photo of Yeats, he’s not the dashing, Captain America type. Rather he falls into the hot geek that doesn’t know it category. More like James McAvoy or Timothée Chalamet. Yeats’ actual poetry is bound to the story and woven throughout the book. Fisher even works Maud Gonne and their tumultuous relationship into the narrative. I appreciated that Fisher gives Yeats a healthier, cleaner ending there than he had in our universe.

Apparently, Neve and Will are linked by a past relationship. Unlike the characters in book one, Absinthe Earl, who are inhabited by the spirits of their ancestors, Neve and Will are actually reincarnated. It’s a pairing that holds across time and different universes. Their strong connection makes us root for them through every twist, turn, and set-back. They make for a great conclusion to the series. I’m looking forward to whatever Fisher writes next. I love her style and her commitment to producing books I actually want to read. Well done.

They searched for each other in dreams. Then they traveled through time to save Ireland.

Portland book artist Neve Kelly is having weird visions — vivid daydreams of lovers on a battlefield that yank her out of reality. A couple weeks before Halloween, a confused, strangely dressed man appears in her living room. He drops a slip of paper that describes a dream much like her own before disappearing without a trace.

Will Yeats has had enough of heroics. With the peace between Ireland and its enemies restored, he plans to spend the next decade quietly writing his Irish fairy history. But suddenly he’s time traveling again. He briefly visits the home of an intriguing stranger, who appears to be American. The next time he’s drawn there, he finds her being sucked through a ghastly hole in her ceiling.

Will saves Neve by carrying her back to 1888 Ireland, where he learns that not only is she from more than a century in the future, but from a parallel world where fairies and Tuatha De Danaan heroes are no more than myth. Their dreams of ancient lovers have brought them together … but why? Dark portents surround them — portents bearing the mark of the Morrigan’s meddling — and they soon discover it’s all part of a sinister scheme to seize the throne of Ireland. And the love story from their dreams has begun to manifest in the present moment.

Will’s friends — Irish Queen Isolde and her allies — are depending on Will and Neve to connect with the past in order to save Ireland. But can anything save them from the violent end that their dreams have foreshadowed?