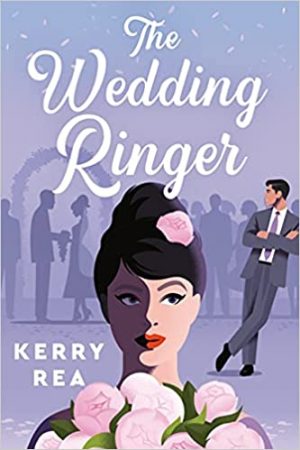 The Wedding Ringer was a little difficult for me to review. It doesn’t fit into a tidy category. It wants to be contemporary romance, it’s certainly all about the love life of main character Willa Callister, but it’s also about the love life of all the other characters which kind of tips it over into women’s fiction. It’s less about the actual romances and more about how these women all relate to each other. The romance is completely secondary as we swirl around the relationships between Willa and her sister, Willa and Maisie Mitchell, Maisie and her fiancé, Maisie’s fiancé’s sister and her husband, Maisie’s family, Willa and Maisie’s soon to be sister-in-law and mother-in-law, and Willa’s own love interest, the best man. Oh, and of course her ex-fiancé and ex-best friend.

It was also a bit of slow starter for me. Willa has endured a truly devastating loss. Six weeks before her wedding, she walks in on her fiancé and her lifelong best friend in bed with each other. That isn’t something you just get over quickly. I applaud Rea for making us feel how really low and broken Willa feels about it. That’s also a really rough way to start a book. While Willa is at times amusing—or at least amusing things happen to her, you don’t really want to laugh at someone who’s down. We also didn’t get to know Willa when she was up, before the story began, so our opinion of her is colored by her depression. You know it’s going to be a long road when she says things like, “The earnest attempts to advise me on my dumpster fire of a life only serve to piss me off.”

Willa deserves time to get over her loss, but it drags some as she refuses to embrace the good things that begin happening to her when Maisie literally barges into her life and hires her as a bridesmaid and pretend long lost friend. It’s probably more realistic, but it makes for tough reading when Willa refuses to heal. At 50% in, I almost made it a DNF as she dug her heels in, choosing to stay stuck. We’re 65% in before she even considers it as a possibility. This is a small spoiler, but one of the most authentic things Rea does with Willa’s story arc, is not having her make-up with her old BFF. It was a betrayal by both of the people she loved most and to allow them back into her life would not have been a positive part of her healing so soon.

Maisie is also little problematic. She’s a bit of an intentional mystery. Instead of talking to her, Willa deliberately tries to keep her distance. This serves as the author’s vehicle to delay certain details about Maisie that otherwise would come up in a normal conversation. It’s not unlike a television show where someone bursts into the room right at the same moment we were about to learn an important piece of information. I understand it, but I don’t appreciate it. To me an author can do better. As this is Rea debut offering, I hope future books will do better.

I lived in Dublin, Ohio, where the book is set, for a couple of years. Rea, also from that area, does a good job of representing the suburbs of Columbus with maybe the exception of being overly optimistic about commute times as the population has dramatically increased with new construction. She highlights some of my favorite things about the living there.

Overall, I did like the book. It does have a good ending. I would be willing to try another title from this author. I feel she is only going to get stronger.

Once upon a time, Willa Callister was a successful blogger with a good credit score, actual hobbies, and legs that she shaved more than once a month. But after finding her fiancé in bed with her best friend, she now spends her days performing at children’s birthday parties in a ball gown that makes her look like a walking bottle of Pepto Bismol. Willa dreams of starting fresh, where no one knows who she used to be, but first she needs to save up enough money to make it happen.

Maisie Mitchell needs something too: another bridesmaid for her wedding. After a chance encounter at a coffee shop, Maisie offers to pay Willa to be in her bridal party. Willa wants nothing to do with weddings–or Maisie–but the money will give her the freedom to start the new life she so badly desires.

Willa’s bridesmaid duties thrust her into Maisie’s high-energy world and into the path of hotshot doctor Liam Rafferty. But as Willa and Maisie form a real friendship, and Liam’s annoyingly irresistible smile makes her reconsider her mantra that all men are trash, Willa’s exit strategy becomes way more complicated. And when a secret from Maisie’s past threatens to derail the wedding, Willa must consider whether friendship–and romance–are worth sticking around for.