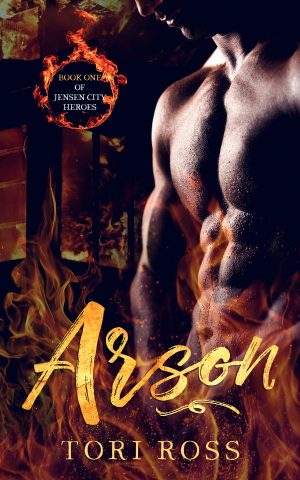 I knock on the door lightly and hear her voice respond for me to come in. “Hello?” I call as I step into the room nervously. “Is it ok if I come in?”

“Hello?” A scratchy feminine voice responds from behind the curtain. “Are you the guy that saved me last night?”

“One of them, yes,” I say as I step around the curtain face-to-face with her beautiful almond-shaped brown eyes. I’m left awkwardly speechless for a moment as we stare at each other. Her mouth comes open for just a moment and then closes again. Her eyes then roam up my body from my feet to my head, and she gives a tiny exhale after she looks me up and down. It’s such a small sound, and she tries to cover it up. She shakes her head slightly to fluff her hair and manages a small smile.

I clear my throat as if I’ve forgotten how to talk. “My name is Archie Morganstern,” I murmur, and it’s everything I can do not to stutter. “I work for the Jensen City Fire Department. It’s nice to meet you.”

She looks a bit pale, and her long, wavy hair could use a good wash. She’s hooked up to an oxygen mask and wearing a hospital gown. Despite these unsexy facts, she’s still the most beautiful woman I’ve seen in Jensen City or anywhere in my entire life. Not that I’ve been to a lot of places, mind you. She could put a movie star to shame, and she has the longest natural eyelashes I’ve ever seen.

“Well, thank you so much,” she says in a flustered voice. “I think I remember hearing your voice. It was really comforting. I thought I was going to die,” she gushes with a bit of redness creeping up her skin. “I’m a bit embarrassed, actually. I’m not a stupid woman. I swear I’m not. I’m highly educated. I have a good job. I even do the crossword and stuff every week. I don’t know what the hell I was thinking,” she says, looking nervously around the room. “And now I’m babbling. Great. You probably think I’m an even bigger idiot.”

“Ms. Clausen, I don’t think you’re an idiot,” I say in what I hope is a reassuring and soothing tone.

“Really? Because I do. You can call me Darby, by the way.”

“Darby it is. You can call me Archie.”

Darby takes a deep breath to try to calm herself. “Well, it’s nice to meet you, Archie.”

I awkwardly clear my throat and ask what I’ve been dying to know. “What were you doing there anyway, if you don’t mind me asking?”

Darby pauses like she’s unsure whether she can tell me. There must be some secret surrounding why she was at the warehouse. Unfortunately, she was present at a large fire in a warehouse packed with an unknown substance. Someone is going to investigate this and will want information from her.

“Ma’am. You were at the scene of a large industrial fire. We need to know what happened.”

“You wouldn’t believe me if I told you. You’d just think I’m crazy like everyone has always thought of me,” she responds sadly.

“I don’t know if you’ve heard this level of weird.”

I pause for a moment and take a look at my surroundings. Her room is bare, and weak sunlight streams through the small window. I notice a small table to the side of her bed with a hospital water jug on it. Tentatively, I walk over and put the flowers I got from the gift shop on the table. I forgot I still had them in my hands.

“They didn’t have much of a selection. I would have liked something a bit nicer for you,” I say with a smirk hoping to put her at ease. “We’ve never met until now, so I don’t know your favorite flower.”

Darby’s eyes roam up my body from feet to eyes again. Blushing as if I caught her checking me out, she rubs her hands together as if they’re cold. “I actually like daisies. I always thought they looked classy. They probably don’t have them in the gift shop, though.”

Darby looks over at the flowers and reaches out tentatively to touch some of the petals. I can’t take my eyes off of her lovely square-shaped nails and long fingers. What’s worse is that my mind instantly makes me imagine Darby’s long fingers around my d*ck. I instantly shake off the image in my mind and try to recover enough to have an intelligent and respectful conversation.

She turns back to me with a smile. “I love the ones you brought because they’re from the guy that rescued me. That doesn’t happen every day.”

I hope I can get her to open up, but Darby just sighs and looks down at her hands and her hospital blanket. She seems to consider something for a bit and then looks over to me quietly.

“My best friend’s name is Remi. She’s the only person outside of family that I’ve ever officially told what I call the ‘weird thing,’ and I’m worried about what others will think of me. The thing is, I can do something that others can’t do. Most people can never prove that I can do it. They’re just weirded out if I’ve happened to mention something to them,” she murmurs as she looks frantically around the room. “I just don’t think you’ll understand.”

She closes her eyes momentarily, and I think I must be exhausting her. Even though she doesn’t have a lick of makeup on, her lashes look huge on her face while her eyes are closed. I could stand here and stare at them all day.

I instantly decide to try a different tactic. “When do you get out of here?” I ask.

Archie Morganstern is a fireman in Jensen City with a typical life. At least it’s a normal life until the night a warehouse fire changes everything. What is the mysterious substance he fell into during the fire? Who is the gorgeous woman he found during the fire, and how did she get in the warehouse? Most importantly, how the hell does he suddenly have the ability to move fire around with the wave of his hand?

Darby Clausen has a tedious job as a mortgage processor, but she has a secret only she and her best friend know. She can see a person’s most recent dream with one touch. When she accidentally sees what the man harassing her at a bar dreamt last night, she sets out to investigate on her own.

After Darby is rescued from a burning warehouse by a mysterious firefighter, they work together to find out why he has sudden powers and precisely what is going on in one of Jensen City’s biggest corporations.