Secrets Under the Sun 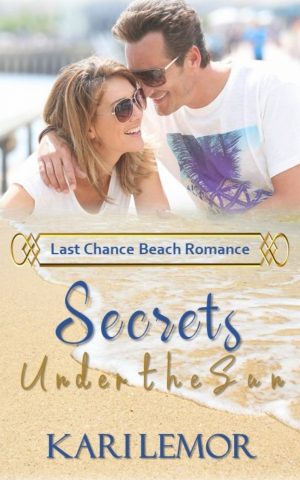 He gazed at the shiny shell. “It’s pretty, but not as pretty as you.”

Thea giggled, then her lips thinned, and she stared at him solemnly. “Mr. Dean?”

He couldn’t wait for her question. She always had such unique conversations with him. Strange how he never knew what fascinating beings small children were.

Okay, that wasn’t what he was expecting. “Of course, I like her. Your mom is a nice lady.”

The girl nibbled on her lip, then scrunched up her nose. “I mean…you hold her hand. A lot.”

Dean breathed out in relief that the only thing she’d seen was the hand holding. “I don’t want her to get lost.”

Thea rolled her eyes as well as any adult he’d seen. “She’s lived on this island a long time. I doubt she’d get lost.”

“Well, maybe I don’t want to get lost. I haven’t been here that long.”

Her tiny face was so adorable when she was thinking. Sidling closer, she wedged her hand into his. It was such a rare feeling. Not unpleasant at all and maybe even a little comforting.

Her chin tipped up, and her brows drew together. “Do you want to be boyfriends with Mom? She’s never had one before.”

Oh, man. What did he say to that? He’d love to be way more than boyfriends with her mom. Not something an eight-year-old needed to know.

“Well, I think she loved your dad a lot, and it’s hard for her to think of someone else that way.”

Thea nodded slowly, thoughtfully. “Yeah, I think so, too. But I think it’s also hard because she has to take care of Xander and me and Yia Yia. Even though Yia Yia helps watch us, she still can’t do some things, like lift heavy pumpkins.”

As Thea twisted to check where her mother was, she tightened her grip on his hand. He squeezed back to let her know he was here for her.

When Thea jerked on his hand, he bent down close to her face as she said in a soft voice, “I think Mom could use a boyfriend. Do you think you could be her boyfriend?”

He pursed his lips and closed one eye. “I don’t know. What do I have to do?”

Let’s hope she didn’t know exactly what the job entailed.

Her tongue poked out of her mouth and slid to the side. “Uh, hold her hand. Make her laugh.”

“Hmm. Yeah, you do. But I think when you’re her boyfriend, you might have to kiss her.”

He reared back and made a terrified face. “Really?”

Thea’s eyes opened wide, and she tugged again. “It’s not so bad. Mom smells really good, and her skin is so soft. You should touch it and see.”

Oh, this little girl didn’t know what she was asking. He was quite aware how soft Eleni’s skin was and how intoxicating her fragrance was. It about knocked him off his feet every time he got close to her.

“Do you think your mom would want me to kiss her?” Put that ball back in her court.

Thea sucked her lip in, her gaze high in thought. “I think she’d like it. She says you’re a nice man and very handsome.”

“She told you that?”

“No, I heard Yia Yia say it to her, and Mom agreed. She likes watching you when you work at The Pearl. She said you have nice muscles.”

Dean pushed back the chuckle that threatened to escape. Talk about little ears and what they heard. He needed to ask the tough question, though.

“Would you be okay if I was your mom’s boyfriend? And how about Xander?”

“Oh, yeah. You’re lots of fun.” No hesitation. That was a good sign. “I like having you around, and Xander says he wishes you could come stay with us all the time, so he’d have another guy in the house. He doesn’t complain too much, but I know sometimes he doesn’t like all the girly stuff we do.”

“I can’t say I blame him. Although when he gets a little older, I’ll bet he doesn’t mind quite so much. Being with girls. Not necessarily doing the girly stuff.”

“So, you’ll do it? Be Mom’s boyfriend?” The hopeful expression on her face made him want to give her everything.

“I think you’re missing the most important part of this question. Does your mom want me to be her boyfriend?” God, what an old-fashioned term at his age.

“Did you find a good shell?” Her gorgeous smile was in place. Would it stay there after her daughter got through?

“Mr. Dean and I were talking. I think he needs to be your boyfriend. ‘Cause you don’t have one and you need one.”

Eleni’s face stiffened, and she tilted her head. “Why do I need one?”

“So you can have another grownup to play with. Yia Yia is too old for you, and Nadine is married to Marek, and Mr. Dean really likes you. He says you’re a nice lady.”

“He does, does he?” Eleni pinned him with her gaze.

Dean took Eleni’s hand and drew her near. “Yes, he does. Thea brought it up, but I have to admit I kind of like the idea. That is, if you’re okay with it?”

Her lips twitched. “You want to be my boyfriend?”

He shrugged, his own grin popping out. “I’m not opposed to the idea. Only if it’s something you want.”

“I suppose we could try it. Would we go on a date?” She wiggled her eyebrows.

Dean bent down to Thea and mock whispered, “Do we go on dates if I’m her boyfriend?”

Thea’s head bobbed up and down rapidly. “You can take her to a fancy restaurant and buy her flowers and candy.”

“I think I could do that.” He straightened up and asked, “Eleni, would you like to go to a fancy restaurant with me?”

She paused. Did she not want to go out with him?

“I would, but it doesn’t have to be any place real expensive. A cup of coffee at Playing Hookey would be okay, too.”

Ah, she didn’t want him spending too much money on her. If only she knew. Boy, was it refreshing to find a woman who didn’t want everything she could get. Who actually considered what he could afford.

“I’ve got a little saved up for a rainy day. I think we could splurge.”

“Then, I guess a date would be nice. Is that okay with you, Thea, my little matchmaker?”

The girl crossed her arms over her chest and nodded. “Yeah, but maybe you should try the kissing first just to make sure it’s okay. Mr. Dean was worried about that.”

Eleni’s eyes gleamed. “You were worried about the kiss? Did you think it wouldn’t be good?”

Sometimes riches have nothing to do with money…

Konstantine Petrakis, reclusive owner of The Ocean Pearl Resort, needs to find who is giving away marketing secrets. Going undercover to ferret out the culprit, he dons his Dean Peters persona and takes a position there. After all, no one pays attention to the maintenance staff.

Eleni Griffin puts in long days and strange hours as the only administrative assistant to the top brass at the large resort on Last Chance Beach. Homeschooling her eight-year-old twins and taking care of her mother isn’t easy as a widow on a small salary.

Eleni’s position puts her squarely in the suspect category. Yet, once Dean gets to know her and her charming family, he realizes she’d never betray the resort. His money can make her life easier, but then he’d have to confess he’s been lying to her for months. What started as a short-term project to find a turncoat might have Dean finding a permanent reason to stay on the island.