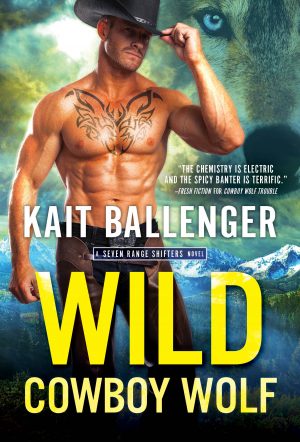 “Be vewy quiet. We’re hunting wabbits,” Blaze whispered, after they’d encountered their fourth hare in the forest underbrush with not so much as a single vampire in sight.

“That reference is lost on me,” Dakota answered.

“It’s Elmer Fudd from Looney Tunes. It’s an American cartoon classic,” Blaze answered. “We’ll work on it.” Crouching down in the brush, with a quick lash of his hand, he snatched the hare from beneath the patch of rocky mountain juniper by its long hind legs. The tiny animal had been unsuspectingly nibbling on the foliage, unaware that two wolves approached.

The small animal wriggled in his grip, tiny heart thumping in response to the predator now holding it as Blaze’s eyes flashed to wolf. “You could at least make it difficult,” he said to the creature. “Next time, I’ll eat you for dinner.” He released the hare back into the underbrush, watching it dart off into the darkness of the forest.

Dakota sighed. “Unless you plan to actually eat it, leave the bunnies alone.”

From the way Dakota spoke about their prey when in human form, no one outside the pack would know she was a fierce she- wolf. That love of animals coupled with her organized, analytical nature made her an excellent veterinarian.

Blaze grumbled, resting his arms on his knees. He stared into the shadows, still watching the spot where the hare had disappeared. “They make it too easy.”

It was the first true exchange they’d had since they’d left the pasture to tromp through the forest several hours earlier. They’d caught the sickly sweet scent of vampire on the breeze, the smell instantly stirring their wolf senses, but any actual encounters had proved elusive.

But they were out there. The smell of the cattle’s death in the field would draw their intrigue.

“Why do you think the vampires are draining animals?” Dakota used the stake he’d given her to gesture to where the bunny had been. “Malcolm mentioned a deer being drained in the forest when we were on patrol the other night, and now this.”

Considering everything going on lately, Blaze wasn’t entirely certain the vampires were the sole culprits. The smell of this much death would have drawn them, and they never missed a chance to attack the pack. Old rivalries died hard, but…

He shook his head. He still couldn’t bring himself to speak their name. The packmaster had warned him about being too paranoid. Perhaps he’d been so focused on his past that he wasn’t seeing what was laid out directly in front of him? Even if his enemies had come for him, they’d send two, maybe three, since they’d know from his file what he was capable of.

That small number would be enough to do the necessary damage both to him and the pack. The carnage of a dozen dead cattle they’d left behind in the field was only worthy of one—and after what he’d done to them in Dark Force, they wouldn’t take their chances. Not to mention they never drained animals.

He inhaled a deep breath, trying to reassure himself further. Not to mention all the occurrences around the ranch and the disappear- ance of the subpack member had had little to do with him. After Dark Force, they were supposed to be extinct after all.

But his instincts said otherwise.

Blaze shrugged, still crouched near the forest floor. “There’s no way to know why they’re feeding on animals unless we find one and ask it.”

Dakota scoffed at his sarcasm. “You know those bloodsuckers are too tight-lipped to converse with us, even under duress—sick, insatiable monsters that they are. They—”

“Dakota, behind you!” Blaze shouted in warning.

At his word, Dakota plunged the stake in a downward arc beneath her armpit, driving it into the bloodsucker’s stomach. The vamp had come on so fast using that damn warp-level speed of theirs that there’d been barely a second for her to prepare for it. But Dakota had been ready. She spun, quickly wrenching the stake from the vampire’s stomach only to plunge it ruthlessly into the monster’s pulsing dead heart.

The vampire sputtered for a moment before bursting like the blood bag that it was, coating him and mainly Dakota in a spray of grime. That was hardly the last of it. Their kills were so much cleaner in wolf form—then he only needed to wash the blood from the fur of his neck and muzzle. But there’d be more vampires where that came from.

Blaze shot to his feet, sensing another vamp approaching to their right. The bloodsucker raced up on him, long fangs bared. The strength and teeth of a vampire could prove deadly to their kind, if the knife in the other creature’s hand didn’t. He’d seen it happen too many times before.

But those wolves hadn’t been him.

Meeting the bloodsucker blow for blow, he blocked the incoming blade by catching the vamp’s arm with his own. He leveraged the millisecond of the vamp’s hesitation and wrenched his dagger from its sheath on his chaps. With a fierce snarl, Blaze sliced his blade across the bloodsucker’s torso. The vampire let out a screeching hiss, stumbling back.

Without warning, Blaze shifted into wolf form, clothes falling to the forest floor beneath him as his limbs twisted and his fur burst forth. The instant his paws connected with the cool mountain ground, he charged, meeting the bloodsucker head-on. This first vamp went down easy. The second, even easier. By the third, he was getting bored.

Darting forward, he rushed the monster, sharp claws scraping and jaws snapping. The scuffle continued for several moments longer until finally he pinned the monster. The vampire had put up a fight, but not one worthy of him.

Canines bared, Blaze snarled before he ripped into the flesh of the vampire’s throat. The metallic, iron taste of blood coated his furred maw. On his hind legs and neck, his hackles raised. Inside, his instincts prickled with awareness. A familiar scent caught in his nose.

With all the force of an alpha wolf guarding his mate, Blaze felt a protective surge race through him. He whipped around in search of her. He hadn’t been able to keep his eyes on her lest they both get themselves killed. But it hadn’t mattered. She was too fierce a warrior. She didn’t need him to save her. The leftover remains of two vampires lay beside her cowgirl boots, and she was coated nearly head to toe in blood—the blood of their enemies that she’d shed.

The gold of her wolf eyes burned like a beacon in the darkness, and she growled as she cast him a censuring look. “You were supposed to stay in human form.”

Even with her help, this wolf shifter can’t outrun his past…

Dakota Nguyen has everything she ever wanted–an appointment as one of the Grey Wolf pack’s first female elite warriors, a vibrant career as the ranch veterinarian, and a chaotic, endearing family. When the daily grind gets lonely, her best friend Blaze always knows how to cheer her up. But lately, she has a feeling that there might be something more between them.

One of the pack’s elite warriors, security technologist Blaze Carter is as smart as a whip, quick to joke, and fast on the draw. But underneath his witty exterior, Blaze harbors a dark secret, and fears the day when his demons catch up with him. Unwilling to put his pack at risk, Blaze keeps his secrets to himself and his pack at arm’s length–except for Dakota, who has managed to sneak into his heart.

But even as friendship turns to passion, a hidden enemy threatens to destroy the pack and all that Blaze and Dakota fight so hard to protect. Now, to act on their desires could have deadly consequences…