Can you tell us a little bit about the genre you write in?

I write urban fantasy, which is generally part fantasy, part adventure, part mystery, part romance. I love this genre because it covers so many aspects of storytelling that you can literally do anything with it. It can be light or dark; sweet or spicy; funny or gritty; heavy on magic or have just a hint. Best of all, because it’s written in a contemporary setting it feels grounded and believable. Urban fantasy is the genre for readers who want to bring some magic into their everyday world.

What inspired you to write this particular story? What were the challenges in bringing it to life?

I wanted to write this story because I’d developed a whole world for my Magicsmith series but had only been able to show it through one perspective. I wanted to explore the world through a character who was totally different from my first protagonist, someone who was already immersed in the magical undercurrents of the world and confident in their own abilities.

This presented an interesting set of problems however, because I was not starting with a clean slate. I had to figure out where in the timeline of my existing series my new story would take place. I had to make sure all the facts of the world lined up with what I’d already established, but because I wanted this book to stand independent from the series I also needed to reintroduce information that I’d had a full five books to explore in a very condensed version to get new readers up to speed.

Hopefully I’ve succeeded in creating a book that is both a fun and complete read on its own and will delight existing Magicsmith readers with fresh insight into a world they already love.

Do you use real or fictional locations in your stories? What kind of research do you do for the setting?

I use both real and fictional locations in my stories. For example, the main character in my Magicsmith series, Alex, lives in the Colorado Rockies outside the small town of Nederland and works in Boulder. These are real places that I’m quite familiar with, so many of the details are pulled from the real world, but the bookstore and gallery where Alex works are made up and dropped into that real setting. This combination creates believably in the story. Then there are times when Alex travels to the fae realms, which are connected to but not part of the mortal world. In those cases, everything is made up. I get to invent new creatures, adjust the colors of the trees and sky, build cities out of improbable materials, and even change the way time passes. Demon Riding Shotgun is set mostly in and around Baltimore. Since that’s a real place that I’m not super familiar with I had to do a lot of research to make sure my story lined up believably with the real world. This meant looking up maps, businesses, police districts, tourist attractions, etc. Again, some things are made up, like the office building where the antagonist works or the homeless shelter that features in the story, but others, like the restaurant Tir Na Nog on the Inner Harbor and the hotel where Mira conducts her P.I. job are real places.

Tell us something about your heroes. What makes them tick?

Demon Riding Shotgun has two main characters (or three depending on if you’re counting bodies or personalities). Mira was possessed by a demon as a child, which was both a curse and a blessing. The demon protected her, but her mother was severely hurt in the process. Now she carries that guilt and the belief that her magic makes her dangerous to be around. As a result she’s almost completely removed herself from society. She both craves and shuns human connection. This is further complicated by the demon’s desire to connect, something it can’t do on its own as an incorporeal being. So the demon is always pushing Mira to make connections with people while Mira tries to push them away.

The second character is Ty, the cop who’s hunting Mira. He recently quit his job as a PTF agent—a cop who polices magical beings—after leading his partner and friend into a fae ambush and getting him killed. He’s also trying to avoid the pain of human connections, but as the only available magic expert when Mira’s case comes in, he has no choice but to reengage. Ty is fighting his desire to wallow in his guilt while struggling with his fundamental desire to protect people and uphold justice.

What food fuels your writing?

Tea! I’ve pretty much always got a mug of hot tea next to me when I write. Granted that’s not exactly a food, but food and I have a complicated relationship. Tea I can trust.

If you could have any superpower, what would it be? Why?

I’d choose to fly. Not only would it be incredible, it would also be useful. I’d never have to worry about falling down and injuring myself because if I tripped I could just hover instead of trying to catch myself. Plus, I really like heights. 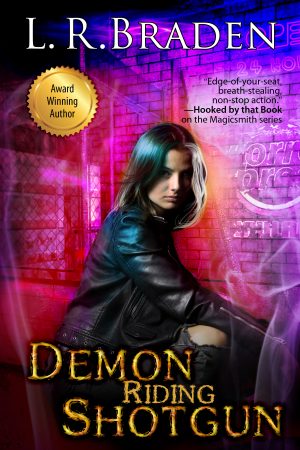 Possessed by a demon since she was eleven years old, Mira Fuentes maintains a fragile alliance with the snarky soul who shares her body. Together they hunt down unstable Rifters—demon-controlled humans bent on causing chaos in the mortal realm. But when a routine hunt leads to a powerful Rifter with plans for Baltimore, Mira quickly finds herself in over her head and at the top of the city’s Most Wanted.

Recently retired from the PTF after losing his partner, Ty Williams now works for the Baltimore PD and keeps his distance from cases involving magic. But when a person dies of clearly magical causes and the PTF doesn’t have any agents to spare, Ty is the closest thing the department has to an expert. Saddled with a new partner he doesn’t want and a mountain of self-doubt, it’s his job to track down a suspect who looks suspiciously like the one-night-stand he brought home from the bar last night.

Mira will have to set her trust issues aside and enlist the help of a man determined to uncover her secrets if she hopes to learn the identity of the demon’s host and prevent the human race from becoming meat puppets for the denizens of the Rift.

Mira darted across the open space between the buildings and crouched under a glassless window opening. Voices drifted out.

“There’s plenty to go around.”

Mira rolled her eyes. Or rather, the demon riding shotgun in her soul did.

Since when do rifters stop to chat with their victims? Besides, it seems like that old guy is leading the conversation. Mira peeked over the lip of the wooden frame. The construction worker had his arms crossed over his Day-Glo vest. His face was twisted into an unhappy scowl that created deep creases in the skin around his eyes, but his flesh seemed intact—no signs of puppet strain, as Mira called the marks usually created by demon possession. Could he be a rifter, too?

<Don’t get your hopes up. What we have is not normal.>

But not impossible. She bit her lip. If there’s another pairing like ours . . .

“This is your only warning.” The construction worker uncrossed his arms and widened his stance, planting his feet. “We won’t let you upset our plans. Find somewhere else to gorge and die.”

This guy definitely knows what he’s facing. And did he say “we”?

The rifter Mira had come to kill launched forward, striking the construction worker in the chest. The second man took the impact, leaning forward slightly to keep his feet as they slid a few inches across sawdust-covered plywood.

Whatever he is, I want to talk to him. Mira vaulted the window frame, calling her magic. She landed in a crouch, one knee touching down in sawdust. Both men turned to look at her. Energy swirled through her, pulled from the air and focused, with the help of her hitchhiker, into a glowing ball on her palm. Tendrils of blue static cracked around a white center. The presence that was always with her but not quite a part of her swelled.

Picturing the result she wanted, Mira flicked her wrist and exerted her will. An arc of pale lightning connected her to the rifter she’d tracked, resting for a moment against his chest before he was blown off his feet. Two-by-fours splintered as he made a new opening in the skeletal frame of an interior wall.

Mira didn’t rise from her crouch but pivoted to face the second man. Maybe another rifter. Maybe a practitioner. Maybe someone like her. . . . “Who are you?”

The man’s gaze shifted between Mira and the broken wall. He pursed his lips. Then he stepped through the doorway behind him that led deeper into the building.

The downed rifter sat up amid snapped beams and a cloud of dust.

She’d come to end him—she needed to end him—but what she’d overheard from the mysterious construction worker had raised more than a few questions, and Mira wanted answers.

Racing past the stunned rifter, she darted after the second man. 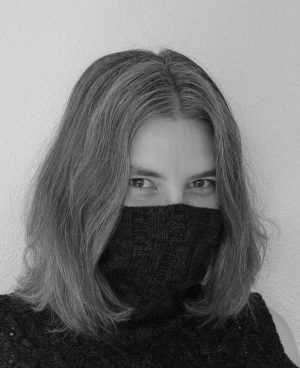 L.R. Braden is the bestselling author of the Magicsmith urban fantasy series, the standalone novel Demon Riding Shotgun, and several works of short fiction. Her writing has won the Eric Hoffer Book Award for Sci-fi/Fantasy, the First Horizon Award for debut authors, and the Imadjinn Award for Best Urban Fantasy (twice). She was also honored to be a finalist for the Rocky Mountain Fiction Writers 2021 Writer of the Year award. She and her family live in the foothills of the Colorado Rockies, where she spends her time writing, playing, and weaving metal into intricate chain mail jewelry that she sells in her Etsy shop.