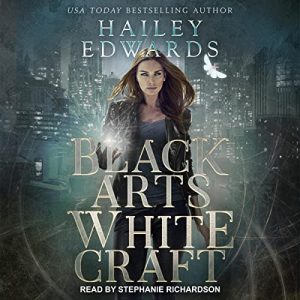 Black Arts, White Craft picks up a few weeks after the conclusion of the first book. To open, we find out how Asa’s demon (and Asa) have claimed Rue. Additionally, listeners gain insight into Rue’s past. I loved seeing how Rue is letting both her human friends and paranormals like Clay and Rue into her heart.

Asa and Clay are back in town because they need help with a case involving a resurrected wednigo (zobmigo) and a black witch. The trio, along with Colby, go to investigate, and in the process they uncover more secrets and perils. The mystery is complex with dangerous implications for Rue and Colby.

Overall, the story is good. I’m still enjoying the mythology. I liked that there is forward movement on the relationship between Asa and Rue, but I felt it overwhelmed the storyline at times. I also found the storytelling a bit repetitive at points. For example, I know Rue is worried about (fill in the blank), but I don’t need her thinking about it and reminding me of it all the time.

There is much about Rue that fascinates me. I want her to succeed and have it all; I’m invested, so I’m worried. I wonder how long she’ll be able to straddle her two lives: human and witch, now that she’s back with Black Hat. I am enjoying Rue’s evolution, especially in light of her relationship with Colby.

Narration: The story is shared via first person POV of Rue. Ms. Richardson uses a strong, upbeat feminine voice for Rue/the narrator, which suits the character and storytelling. The narrator alters dialogue, giving some characters a unique voice, suited to the age, gender, species, etc. Some voices are immediately identifiable, like that for Clay, whose voice is deeper, slower, and large, just like him. Some males, like Asa, aren’t quite as distinguishable, and at times I confused Asa and Rue. I enjoyed Colby, whose young voice sounds a bit cartoonish, which is perfect for the mythological friend.

In the end, I enjoyed Black Arts, White Craft and continue to find the series interesting and entertaining. I want to see what happens next and how Rue can remain friends with humans while working for Black Hat.

After a black witch pitched a hissy fit in Hollis Apothecary, Rue got stuck cleaning up his mess. That was the easy part. Repairing the damage he inflicted on Camber and Arden? That makes Rue wish she could bring him back to life just to kill him again. Slower this time.

While Rue is setting her new life back to rights, Clay and Asa are off working a case, but it soon becomes clear that they’ll need her help to catch the vicious creature preying on locals in a small Tennessee town. She’s got her hands full at home, but Rue has no choice. She must report for duty to honor her agreement with the director. Or else.

What she discovers leads her deeper down the rabbit hole of Black Hat Bureau corruption and promises that, no matter how grim the past few weeks have been, the worst is yet to come.