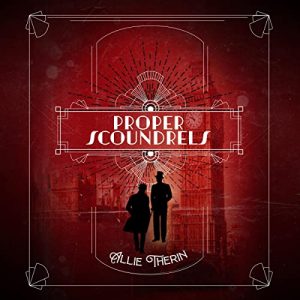 Wesley is a mundane human who accidentally gets mixed up in the more dangerous aspects of magic. Sebastian feels he has many amends to make after he was forced to do the bidding of some power-hungry paranormals. Together, they pair up to stop a powerful paranormal from gaining a foothold in Europe. Proper Scoundrels shares what happens to two of the more important side characters following the events of the Magic in Manhattan series.

Although they start off on shaky ground, Wesley and Sebastian are so good together; they both are damaged scoundrels. Both have been hurt by war, by life, by men. Because they have suffered in their own ways, each can relate and connect, and both are are in a place where they can open to the other, finding love and acceptance. I enjoyed the little acts of kindness each does for the other and how they lift up and support one another.

The action-adventure aspects of the story are fun. Listeners will recognize important characters from the original series. There is new magic and more detailed history of paranormals. I enjoyed following Wesley and Sebastian as they uncover the evil growing in Europe and discover the terrifying repercussions if they cannot stop the bad guys. Both the romance and storyline are contained within the book, which has a satisfying conclusion.

Narrator: The story is shared via the alternating third person POVs of Sebastian and Wesley. Froomkin uses the same voice for the narrator, regardless of POV. Overall, his performance is dramatic and exaggerated with a slight British-sounding accent. Froomkin successfully alters the dialogue voice of each character, making each unique. He does a good job with several different accents including Spanish and Scottish. He softens and pitches his vocal tones higher for females.

In the end, I enjoyed Proper Scoundrels, even if I didn’t love the narration. The story is a nice epilogue of sorts to the Magic in Manhattan trilogy. While it is a standalone story, I don’t know if others would like it as much without having read the original series (which is excellent). But I liked seeing Wesley heal and discover love, and I enjoyed tying up of loose ends.

Sebastian de Leon is adjusting to life after three years spent enthralled by blood magic. The atrocities he committed under its control still weigh heavily on his conscience, but when he’s asked to investigate a series of mysterious murders, it feels like an opportunity to make amends. Until he realizes the killer’s next likely target is a man who witnessed Sebastian at his worst—the Viscount Fine.

Lord Fine—known as Wesley to his friends, if he had any—is haunted by ghosts of his own after serving as a British army captain during the Great War. Jaded and untrusting, he’s tempted to turn Sebastian in, but there’s something undeniably captivating about the reformed paranormal, and after Sebastian risks his own life to save Wesley’s, they find common ground.

Seeking sanctuary together at Wesley’s country estate in Yorkshire, the unlikely pair begins to unravel a mystery steeped in legend and folklore, the close quarters emboldening them to see past the other’s trauma to the person worth loving beneath. But with growing targets on their backs, they’ll have to move quickly if they want to catch a killer—and discover whether two wounded souls can help each other heal.