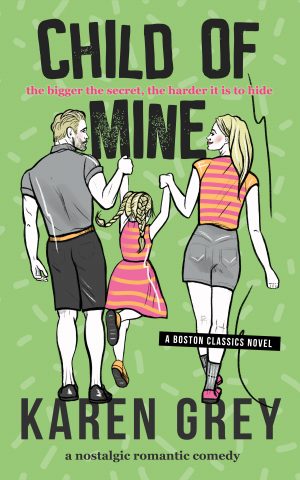 As I walk through WGBH’s glass doors later that week, I’m hit with a wave of nostalgia. The scent of the building is exactly the same as it was fifteen years ago—a mix of the lemony cleaning fluid they use on the floors, a musty smell I associate with the miles of cable snaking through the studios, and—I swear—an aroma of garlic that clings to the set of Julia Child’s kitchen, still tucked away in a corner. Adrenaline courses through my veins, just as it did before every rehearsal and performance. Back then, once I put on the striped rugby shirt we all wore, I could focus that energy into my performance.

Too bad I don’t have that armor today.

Or Izzy’s fearlessness. My heart is filled with worry, but my head is equally full of determination. I don’t know if I’m capable of stepping out of the carefully constructed blind I’ve built for myself, but something’s urging me to take a few baby steps into the light. Since talking to Carol at the fundraiser and on the phone the next day, I haven’t been able to stop a flow of ideas for how we could make Boom an even better show. Anticipation buzzing behind my solar plexus, I approach the receptionist and let her know I have an appointment.

When I was thirteen and a cast member, I thought everything about Carol Ferris was super cool: from the mod outfits to the long hair held back with brightly colored headbands to the neon lipstick that framed her wide smile.

I remember feeling safe with Carol, too. Like I couldn’t really screw things up. Some of the APs were a little more uptight, and the director would sometimes lose patience if we messed up too many takes, but Carol always had a way of finding the good, even in a mistake.

Being on Boom kicked off my love affair with television. Even though that particular relationship ended badly, I do have many happy memories from this time in my life. Besides, it’s not like I’d be in front of the camera if I were a producer.

So, once we get the small talk out of the way, I pull out my notebook. Before I get too far down my list of ideas, however, Carol laughs and holds up a hand. “I’m happy that you’re raring to go, but let’s save the brainstorming until the whole team’s together.” Hand over her heart, she explains, “I oversee all of our local programming, then James—do you remember James Wheeler?”

“Was that ‘don’t call me Jim’ James?” The face of a gruff cameraman about Carol’s age comes to mind.

“That’s him,” Carol says with a smile. “And he still prefers James. He’ll be Boom’s new executive producer. We have a new hire from North Carolina coming in to direct. He’s getting a tour of the facility now, which I didn’t think you needed.”

“Since I spent so many hours prowling around it?”

“Exactly. Anyway, I’m happy to hear your thoughts, but you’d be stepping onto a moving train. We have the cast in place. The next steps are narrowing down which audience suggestions we’ll use and mapping out the shooting schedule.”

I’m still not sure if this is a job interview or if she’s offering me the position. “I’m probably being a little obtuse here, Carol, but—are you talking to other people? For this job?”

Her smile is hopeful. “We are officially, but I’d really love to have you on board.”

“Even though I don’t really have experience?” Probably not the thing to emphasize, but I don’t want to oversell myself.

“You have experience that the rest of us don’t have.”

I nod. “My mom said the same thing, that I might be a good advocate for the kids.”

“I always thought Doris was a wise woman.” She checks her watch. “I told James we’d meet them in reception about now, so let’s head down there.”

As we walk, she explains the funding situation for the show. The current political climate has meant tightened budgets across the board for public broadcasting, but Carol has doggedly pursued sponsorship from alternative sources, and she’s got grants to support the Boom reboot. “Or the Boomerang, as I like to call it. We’re calling the cast members that too, unofficially.”

“Nice.” I nod, relaxing further. “So right now, there’s funding for one season.”

“Exactly, but I’ll be continuing to solicit more. We’ve learned our lesson and no longer rely on a single source of support for any of our programs. But that’s not to say that the funding doesn’t come with strings attached.”

She’s explaining that the new sponsors all want more emphasis on math and science as I open the door to the reception area, but when the two men waiting there look up, what I see stops me in my tracks.

The bigger the secret, the harder it is to hide.

Single mom Isabella York was a celebrity before she had her first kiss, her first date, or her first sip of alcohol. Playing the bad girl—both on and off the set—made up for lost time, but the consequences were life-changing. Back home in Boston, with her “checkered past” behind her, all she wants is to raise her little girl far from the spotlight. After all, revealing her secrets could mean losing everything.

For her, and her daughter.

It’s not that Henry Smith hates kids—they don’t like him. Meanwhile, he’s stuck producing children’s TV, so he’s doing the best he can to be less of a grouch. Not everyone gets a second chance to chase his dream, and if he plays his cards right at this new gig, he can move on to making television that will change the world, not just entertain a bunch of brats.

Even better, he just might be able to talk the woman he never thought he’d see again into greenlighting a do-over.

In this sexy, heartwarming, Secret Baby, 80’s throwback romcom, a Sunshine-Grumpy pair has to face the past before they can find their future… together.

KAREN GREY is the pen name for award-winning audiobook narrator Karen White. A stage, screen and radio drama actor in Boston, New York and Los Angeles in the late 20th century, she balanced child-rearing and career for most of the 2000’s. Now, she’s not only emptied her nest of children, she’s taken it and her pets on the road, so she can spend more time with her nomadic TV sound mixer husband. Delighted to occupy her brain with happy-ending stories, she spends the rest of her time baking, and then doing her best to work off the calories. To learn more, come visit at https://karengrey.com/