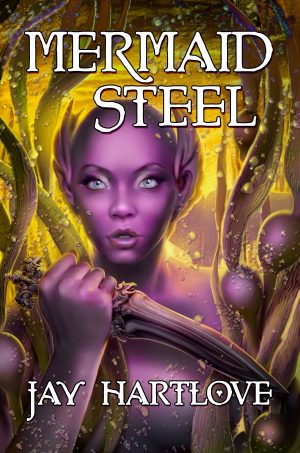 Her heart pounded again, this time with a glimmer of hope. She lowered her head and looked up at him. “Can you forgive me?”

He turned to face her fully. “Yes, Chielle, I forgive you.”

She sighed so big her shoulders dropped. “Thank you.”

“Were you worried I’d say no and throw you out?”

“I didn’t know what to think. The thought of losing you was tearing me apart.” She caught her breath when she heard the words that had spilled out.

Sten smiled the most charming, bemused grin she had ever seen on him. “Losing me?”

Her heart just about jumped out of her chest. Now or never. All of nothing. Even with all of her courage gripped tightly, all she could manage was a quiet but sincere, “Yes.”

She didn’t see when he moved so close, but suddenly his face was right up to hers. He was breathing just as hard as she was. She was pretty sure the pounding vibration she was sensing was his heart matching hers. He leaned in and puckered up, so she did the same.

At first contact she found the mix of soft lips and muscular pressure fascinating, but this was swept away in an instant by a flood of giddy joy that completely surprised her. She held his face in her hands and he wrapped his strong arms around her body, pulling her up against his chest. She let his love wash over her and she dove in.

When at last he broke the kiss, she rubbed her cheek against his in a stroking motion.

“That’s how we kiss.” She pointed all down the side of her face. “Remember the pressure nerves.”

She stroked his bare cheek with her webbed fingers. “Yep.” She wrapped her arms up under his and around his back, pulled him tight, and buried her face in his neck. “You make me so happy.”

She reveled in the connection, warmed by feeling his heart beating next to hers. She nuzzled his neck and was pleased his sweat tasted like sea water.

He stroked the back of her head with his hand, caressing the fringe edges of her gill flaps. Even though his hands were rough, it was the gentlest thing she could remember.

She loosened her hug and looked up into his eyes again. His breathing quickened right with hers and they fell into a mouth kissing, cheek rubbing, head clutching frenzy. He once pushed his lips too hard and opened her mouth, only to encounter her full row of pointed, razor sharp teeth. He pulled back in surprise.

She shrugged, puckered up her full lips, and gave him a reassuring smooch.

He launched back into kissing her and her excitement overwhelmed her. The smell of his body, the texture of his loose shirt, the taste of his breath, the hair on his head, his strong hands grasping her body, fumbling with her dorsal fin, it was all intoxicating.

She was so lost in the moment she did not notice her body was gyrating, her tail was lashing, and she started to rub her breasts against him. He looked down and she saw what she was doing.

“You’re getting pretty excited,” he commented with a chuckle.

“How embarrassing. I’m sorry. My instincts took over.” She wrapped her arms around her chest. “I’m just mortified.”

“Courtship dance, underwater. Everything is always in motion in water. We don’t just embrace, we swim around each other, brushing our bodies together. You must think I have no self control.”

“Hey, abandon to the moment isn’t a bad thing. I’m kind of flattered that you trust me with such an intimate ritual.”

“I really did not mean to do that.”

“Would you stop apologizing? You are who you are. I’m still learning all this. Believe me, I’ve got habits and instincts that I’ll be apologizing for as well.” He caressed her check and held it in his hand. “Besides, when I look into those astonishing eyes of yours, I’ll forgive you anything.”

“I promise not to take advantage of that. Your trust is so important to me.”

“You’ve got it. Hey, it’s way passed sundown. How are you going to find your way home?”

“I’ll use the moon and echoes.” She was sad he had moved so quickly to her departure. He really did think she was moving too fast. She joked to cover her doubts. “You’re not trying to get rid of me, are you?”

“No, of course not. I’ve got a lot to do tomorrow, so I need to get to sleep soon. I also didn’t know if you could navigate in the dark, or if your family would worry about you. Or does your family know where you are?”

“They will worry if I’m out too late. No, I have not told them about you. I told my brother about the metal working, but frankly, I didn’t know what else to say.”

“Have I really been that vague? Chielle, you stir feelings in me that I have not felt in years. I don’t know how safe it would be to go tell your family that you’re seeing me romantically, but please do not doubt that I am very fond of you.”

Fond. Now there’s a word to ponder. “May I come see you again tomorrow?”

“Um, not tomorrow. I’m going to be tied up all day. The day after next would be great. Can you make it day after tomorrow?”

He stood up and stepped to the hearth. “Can I get you anything before you go?”

“No, thank you.” She got up and straightened her tunic. “You’re right, it’s late, and I should be going.”

He intercepted her at the door. He wrapped his arms around her and drew her up close. “I’m really happy you came tonight.” The way he smiled at her nearly dissolved her apprehensions. The warm kiss her gave her finally removed her doubt.

She grinned up at him. “Day after tomorrow.”

As she turned at the wharf edge and smiled back at him in his glowing doorway, she waved and thanked Rorra he was such a patient man. She nearly ruined it. As she leapt off into the black sea, she thought she must slow down, take it easy, let things flow naturally. Rorra would want it that way. He was worth the wait.

The power of love over hate.

A human blacksmith and a mermaid weaver fall in love and must overcome the fear and hatred that divides their neighboring villages. Only by reconciling deep cultural differences can the forbidden lovers bring their peoples back from the brink of war.

A grand adventure, a hero with a dark past, a powerful goddess, and a message of hope for us all. 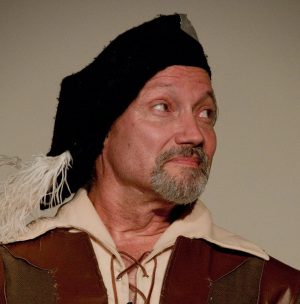 Jay Hartlove is the award-winning author of the urban fantasy Goddess Rising Trilogy (Goddess Chosen, Goddess Daughter, Goddess Rising) and the fantasy romance Mermaid Steel. He is also the playwright, director and producer of The Mirror’s Revenge, the musical sequel to the Snow White fable, which had its theatrical run in the San Francisco Bay Area In August 2018 to rave reviews.

His stories are filled with conspiracies and the supernatural, gods, dreams, angels, and hidden connections. His creative motto is Dark Secrets Revealed. He loves to take stories where the reader does not expect, with sympathetic villains, heroes with very dark pasts, and lots of plot twists.

He is often compared by critics to Michael Crichton. Goddess Chosen (under its original title The Chosen) was endorsed by horror master John Shirley. Jay was selected as one of the 50 Authors You Should Be Reading by The Authors Show. Jay is a former competitive costumer, having won Best in Show at both San Diego ComicCon and WorldCon. You can read more about Jay’s creative adventures, including much of the research he put into his books, at www.jaywrites.com.