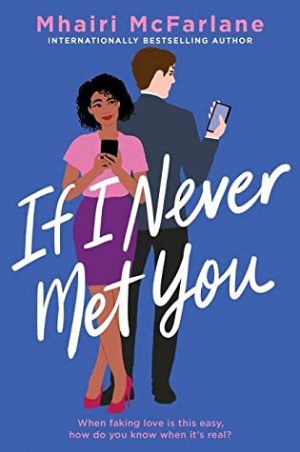 Laurie and Dan have been together for 18 years, so when he suddenly decides he wants out of the relationship, Laurie is shocked. Everyone at their law office sees Jamie as the playboy who will do what he wants to get ahead. When he wants to look more respectable, he makes Laurie an offer that they pretend to be a couple. He looks good for the bosses; she gets back at her ex (who also works at the office).

I am a big sucker for fake relationships, so when I was looking for a library book to fill a reading challenge, I snagged this one up. If I Never Met You is a fun, emotional story about a woman who finds the courage to take charge of her life and find true love.

The story starts with Laurie’s break-up, and for about a quarter of the book, we sit alongside Laurie and get to understand her sorrow. Her meet-cute with Jamie and the entertaining proposition he makes changes the tone of the story and brings life to Laurie. Since neither is trying to impress the other, they can be themselves, which leads to a meaningful friendship. I love the progression and watching them fall in love. Even though we only get Laurie’s POV, it’s evident in his actions and conversations that Jamie is falling for Laurie. But since she’s so hung up on her past, and knows Jamie doesn’t ever want serious, she is obtuse to his subtle messages.

While Laurie is falling in love with Jamie, he’s giving her the support to address some of the other issues in her life, such as her relationships with her dad, her mom, and herself. Likewise, with Laurie’s support, Jamie realizes much about himself and his own ways. I also adore Laurie’s friendship with her BFF, Emily.

In the end, If I Never Met You is a cute romance and enjoyable read. I love the story of learning to get over past hurt and misconceptions. I love knowing that this wonderful couple never would have found love if the events hadn’t played out like they did.

If faking love is this easy… how do you know when it’s real?

When her partner of over a decade suddenly ends things, Laurie is left reeling—not only because they work at the same law firm and she has to see him every day. Her once perfect life is in shambles and the thought of dating again in the age of Tinder is nothing short of horrifying. When news of her ex’s pregnant girlfriend hits the office grapevine, taking the humiliation lying down is not an option. Then a chance encounter in a broken-down elevator with the office playboy opens up a new possibility.

Jamie Carter doesn’t believe in love, but he needs a respectable, steady girlfriend to impress their bosses. Laurie wants a hot new man to give the rumor mill something else to talk about. It’s the perfect proposition: a fauxmance played out on social media, with strategically staged photographs and a specific end date in mind. With the plan hatched, Laurie and Jamie begin to flaunt their new couple status, to the astonishment—and jealousy—of their friends and colleagues. But there’s a fine line between pretending to be in love and actually falling for your charming, handsome fake boyfriend…