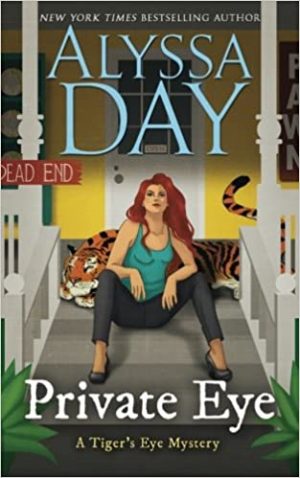 Private Eye, the second book in Ms. Day’s entertaining Tiger’s Eye Mystery, takes place a short time after first book. Tess is settling in as the owner of the pawn shop: updating it, but keeping it the same. In a surprise, a banshee comes in and claims to be Tess’s grandmother, Leona. After some arguing and debating, Aunt Ruby verifies they Leona is Tess’s maternal grandmother and Tess is part banshee, which is why she sees how someone will die if she touches them.

Leona is in town tracking down an assassin who is abducting banshees. She wants Jack’s help on the case, and because Tess is tied into it, they agree to help. Tess is a bit hurt that her grandmother never came to see her, but the family felt it was best because her grandfather was a horrible man.

Overall, I enjoyed my second trip to Dead End, but after loving the first book, Dead Eye, I found Private Eye a bit of a let down. Private Eye has many of the fun attributes that made the first book so hilarious and entertaining, but at times the humor was too silly or felt forced, and the story seemed to suffer because of it. For example, when Tess and Jack are tracking down assassins in town (why are there multiple assassins in Dead End?!), Tess confronts a pair in an almost ridiculous interaction. It gets confusing and interrupts the flow of the story.

I loved seeing Tess settle in and take on a leadership roll now that she’s had time to process Jeremiah’s death (Jack’s uncle, previous owner of pawn shop). She’s gained confidence and it shows, especially in her interactions with Jack. She’s not as intimidated by Jack or her feelings for him, and Jack notices. The pair share a sexy kiss or two, leaving me (and Tess) breathless and excited to see where their relationship is headed.

While I didn’t love Private Eye as much as I wanted to, I still enjoyed the crazy adventure. I love the residents of Dead End, most especially Tess and Jack, and want to know more. I want to see how they deal with each other and their feelings, and how the pair will continue to solve crimes.

When Tess Callahan, new owner of Dead End Pawn, meets her grandmother the banshee, life is about to get complicated. When Tess’s partner Jack Shepherd, tiger shapeshifter and P.I., gets involved to help them investigate a banshee-kidnapping spree, life is about to get deadly. Because nothing is ever simple in Dead End, Florida, and sometimes it takes a tiger’s eye to see the truth.