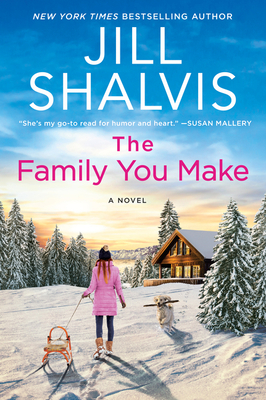 Jill Shalvis is back with a new series, Sunrise Cove, and The Family You Make was a satisfying start to a small town setting where the stories will feature friends, family, and love. So basically classic Shalvis.

The Family You Make features two couples who get their HEA by the end of the story. The main couple is Jane and Levi who meet durning a winter storm. They get trapped in a gondola (as a Southern gal who has never been snow skiing I was a little confused at first because when I read/hear the word gondola I think of the little boats you take rides in. I had no idea that’s what ski lifts are called as well.) Jane is a traveling nurse who was in the gondola after her shift at one of the urgent care clinics and Levi had been enjoying the snow. They have an instant attraction and then the near death incident where Jane saves Ivey’s life adds to their connection.

The secondary couple is Charolette and Mateo both doctors at the local hospital. They’ve worked together and been neighbors for a few years. They have been fighting their attraction for a while, well Charolette is the one really fighting. Mateo continues to flirt and ask her out. They both know Jane because she’s a nurse and when she returns to Sunrise Cove every winter season she rents a room from Charolette.

Levi and Mateo are best friends from school but have lost touch over the last couple of years due to Levi leaving home to start his business in San Francisco. Oh and Levi was engaged to Mateo’s sister but after she died, Levi couldn’t face Mateo and his family so he cut off their friendship out of guilt.

The Family You Make is a great story of friends supporting each other while they try to navigate through some family issues. Both romances, Levi/Jane and Charolette/Mateo are sweet, fun and sexy. I really enjoyed sees them all get the HEA they all deserved even if at times they didn’t think they deserved it. Levi’s family were great supporting characters and brought some comedic relief.

After reading the summary for the next novel, The Friendship Pact, I feel very confident that the Sunrise Cove series will be a set of stand alone stories with only the setting as the connection, much like Shalvis’s Wildstone series.

During the snowstorm of the century Levi Cutler is stranded on a ski lift with a beautiful stranger named Jane. After strong winds hurl the gondola in front of them into the ground, Levi calls his parents to prepare them for the worst…but can’t bring himself to say goodbye. Instead, wanting to fulfill his mother’s lifelong wish, he impulsively tells her he’s happily settled and Jane is his girlfriend–right before his phone dies.

But Levi and Jane do not.

Now Levi’s family is desperate to meet “The One.” Though Jane agrees to be his pretend girlfriend for just one dinner, she’s nervous. After a traumatic childhood, Jane isn’t sure she knows how to be around a tight-knit family that cherishes one another. She’s terrified, and a little jealous. But an unexpected series of events and a host of new friends soon show Jane that perhaps this is the life she was always meant to have.

As Jane and Levi spend more time together, pretend feelings quickly turn into real ones. Now all Jane has to do is admit to herself she can’t live without the man she’s fallen in love with and the family she has always dreamed of.