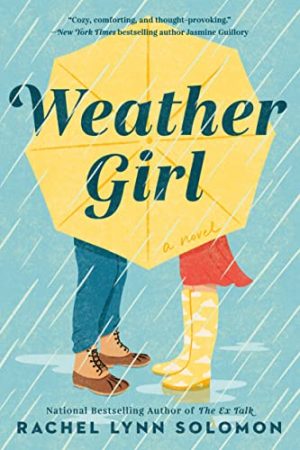 Ari Abrams is her job. She loves all things weather and worked hard to become a meteorologist. Russell Barringer is a sports caster who works at the same television station. Weather Girl is the story of their romance and how they come together by trying to improve the toxic atmosphere in their office created by self-absorbed bosses. Together they scheme and manipulate their bosses into a better place for them and everyone else and a happily ever after for more than one couple.

Ari is shaped by clinical depression. That’s a tough topic to incorporate into a romantic character, although more authors seem to be taking it on. Solomon intentionally gave her a “bright and shiny” job in television instead of using her degree in other ways. Ari’s mother suffers from untreated depression and Ari’s worst fear is becoming her mother. She religiously takes her medication, but also works hard to put on a happy face. She doesn’t want anyone to feel about her the way she feels about her mother. She doesn’t want to let anyone down by being down. It affects all her relationships as no one except her brother really knows the real Ari. Solomon successfully made me feel Ari’s struggle to put on a happy face.

Weather Girl is screaming to be a Hallmark movie. (To my knowledge, they’ve done two with a lead character who was a meteorologist.) The plot in Weather Girl is a little predictable, but not in a boring way. It would be easy to see their mishaps and manipulations translate to a cute, quirky movie. This has Rachel Boston written all over it. It was unfortunate to me that the story was told exclusively from Ari’s POV. Russell was a much more interesting character to me and I would have enjoyed some time in his head. He’s written atypically as a little pudgy, single dad, not the super buff, super wealthy Adonis who’s got all the swagger and confidence you’d expect from someone in sports reporting. He’s more real in that way. My only real criticism of the book is that the chemistry between Ari and Russell felt flat. Without his POV, we have to see the romance exclusively through all of Ari’s insecurities.

Solomon includes discussion questions at the end. I always have mixed feelings about authors who do this, especially with fast reading romance books. To me these are escapist literature, not chewy book club reads. Maybe I’m in the wrong book clubs. Office politics dominate the story arc of Weather Girl and they are certainly great fodder for discussion.

Ari Abrams has always been fascinated by the weather, and she loves almost everything about her job as a TV meteorologist. Her boss, legendary Seattle weatherwoman Torrance Hale, is too distracted by her tempestuous relationship with her ex-husband, the station’s news director, to give Ari the mentorship she wants. Ari, who runs on sunshine and optimism, is at her wits’ end. The only person who seems to understand how she feels is sweet but reserved sports reporter Russell Barringer.

In the aftermath of a disastrous holiday party, Ari and Russell decide to team up to solve their bosses’ relationship issues. Between secret gifts and double dates, they start nudging their bosses back together. But their well-meaning meddling backfires when the real chemistry builds between Ari and Russell.

Working closely with Russell means allowing him to get to know parts of herself that Ari keeps hidden from everyone. Will he be able to embrace her dark clouds as well as her clear skies?