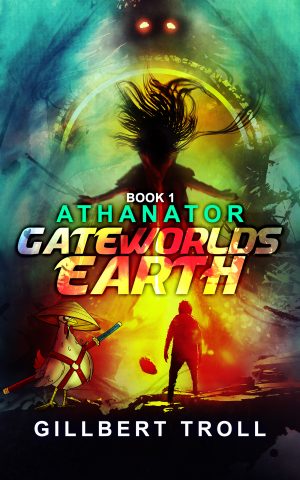 Then the thing appeared.

All thirty centimetres of it.

It must be a were-woodchuck, Riis thought. But on closer examination, it appeared to be a totally average woodchuck, apart from the fact that it had a red cape. Maybe it was Super-Woodchuck.

“Nice to meet you, Roger. My name is Riis. Could I ask you, if you are one to know, what made that thrashing rhino-like noise?”

Roger seemed surprised at the question. “Oh, it was me. It is way easier to scare away some of the creatures of this forest than to fight them. Fighting eight or nine were-hyenas would be a bother, you see,” he said.

“I bet. How on earth did you make that sound?”

“Mainly nunchucks,” stated the woodchuck simply as he pulled out two nunchucks from under its cape.

“I see. I have no further questions on that topic. May I ask for some help from you? I would like to get to Mistare.”

“Sure. That is easy. Its wall is behind you.”

Riis turned, and there was a massive wall behind him. Riis was certain it had not been there before, as that was the direction he had come from.

The wall was made of solid metal, and the top of it could not be seen. No gates or any other form of the entrance were visible, either.

“Climbing doesn’t really sound like a good idea. It is said to be extremely high. I would suggest knocking.”

Riis did not ask any further questions. He just knocked. After a few seconds, a door appeared. Then it opened, and a balding man looked out.

Before Riis could say anything, the woodchuck went over to the man and asked, “Could I get some ice cream, please?”

The man looked at the woodchuck as if it were crazy. Then the door closed without another word, and the wall disappeared.

“There is no point in saving the world if there is no ice cream,” stated the woodchuck simply.

The woodchuck just looked at him in a docile manner.

“Now, what the hell should I do?” asked Riis.

“Well, please stand aside if you could. I would really like to get my ice cream.”

Riis looked behind him, and there was the wall, the door, and the bald man with a cone containing three scoops of ice cream. Vanilla.

Roger went over and took the treat. “Thank you, my good man. See you tomorrow.”

“See you, Mr Roger,” said the bald man, before turning to Riis. “What do you want? We are out of vanilla ice cream before you ask. Roger ate it all.”

“Thank you, but I am fine without it.”

The woodchuck began to leave and, while doing so, muttered something that could have been interpreted as, “Someone should get a life.”

“Before I get to what I want, may I ask why you gave a woodchuck ice cream?”

The man slowly looked Riis up and down before answering. “Because he doesn’t like cheese,” said the man sternly.

“He protects the outer walls from attackers, and this is his pay. Now, can we please get to the what you want part? I have many duties to attend to.”

“I am here to see Gratahn.”

The doorman looked like a person who was contemplating if he should run or not. “That is not a particularly good choice. I think choosing something else, like chocolate cake, might be better.”

“I have a mission to complete, and it cannot be done with chocolate cake. So, please, lead me to him.”

“Anything in the universe can be accomplished with chocolate cake. If you are smart enough. Just ask Roger. But I see that you are not, so follow me, sir, and let me lead you to your death.”

“I didn’t say my death. I said, please lead me to Gratahn.”

“Yes, I heard you, sir, my mind just replaces similar things. Synonyms, I think they call them. Bad habit, I guess. Please come with me.”

With that, the balding man started down a dark corridor.

When a smug but mighty talking tree asks him to retrieve one of the rune crystals of the Multiverse Gate Earth, John Zelm “Athanator” decides against his better judgment that he will do as he is told and recover the guard rune to save the planet. As the balance of the multiverse itself might be at risk, he is helped by powerful allies such as a chicken and a platypusbear.

Can John save us, or are we dead already? You must read the book NOW to find out! Otherwise, it might be too late!

A book by Gillbert Troll, who is in the process of making the renowned bestseller of the multiverse: “How to start great and meaningful conversations with dark elves.”