From the first book, Hex Kitchen: 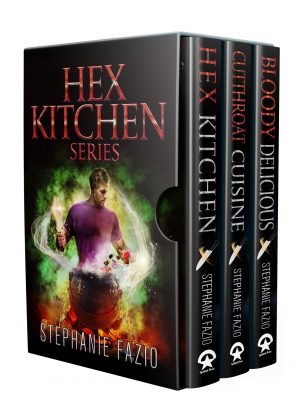 Left alone in the kitchen, Kenzie surveyed her domain.

The stained countertops, warped old griddle, and dull knives were a far cry from the one-star Michelin restaurant she’d grown up in. If her dad could see her now—

Kenzie stopped that thought in its tracks before her sanity derailed. Thinking about her dad always inspired a simultaneous urge to break down sobbing and punch through the nearest wall. Since neither would keep her from getting fired, she pushed all thoughts of him and her former life out of her mind.

Kenzie focused on the task at hand. She began to cook.

Her hands remembered what to do, even if it had been five years since she’d made a real meal for anyone besides Kiwi. She opened the industrial fridge and began pulling out every ingredient that looked to be in reasonable shape. She ignored the freezer.

Everything else faded away as she began to chop her veggies. Without slowing, she added olive oil to a pan before tossing in finely-diced shallot, red chiles, and jalapeño.

Kenzie didn’t see the whole dish in her mind, but every step presented itself to her as though she were following a recipe. Her mind went blissfully empty of everything except for the rhythmic tap tap tap of her blade on the board. Soon, the sizzle of cubed potatoes joined the harmony in her pan.

Kenzie added the mostly-cooked potatoes and veggies to a cast iron skillet before topping it with two raw eggs. She put her sunrise-in-a-pan in the hot oven. Then, she concentrated on her avocado crema. A fresh citrus scent filled the kitchen as she zested a lime. A sprinkle of coarse sea salt, and…perfect.

The timer in Kenzie’s head told her the eggs were almost done. She found a small packet of surprisingly-unexpired pine nuts on a back shelf. She poured them into a dry pan, tossing the seeds until their earthy scent suffused the air.

Kenzie moved around the kitchen, as light on her feet as a ballerina. Music played in her head. She was dragged back to all the times the sous chefs at Ashner’s blasted music in the wee morning hours after the customers were long gone.

Kenzie hummed along with the phantom music as she pulled her bubbling pan out of the oven. The golden yolk embedded in the chile-studded potatoes looked exactly like a sunrise.

She would have liked some fresh cilantro to finish off the dish, but since there was none to be had, she sprinkled some finely-chopped parsley over the eggs for another burst of freshness.

“Now, that’s what I call a breakfast,” Kenzie said to herself as she marveled at her creation.

“Er, Kenzie?” Max poked his head into the kitchen. “Loretta says, um, hurry up—” His jaw clicked shut and his eyes bugged at the sight of Kenzie’s creation. “That smells…. Wow.” He shook his head in disbelief.

“I’ve got this,” she told him, wrapping a towel around the pan’s hot handle and carrying it out to the dining area.

Maybe it was juvenile, but she wanted to see the customer’s face when the woman took her first bite.

Kenzie couldn’t ignore the soft warmth that was lighting up her insides. She’d had more fun cooking this meal than she’d had in…way too long.

Damn. She really needed to get out more….

“That smells just wonderful.” The woman put down her phone and tipped her chin up, sniffing as steam wafted from the pan toward her. “Reminds me of Barcelona.”

Kenzie couldn’t help but smile at that. She’d never been to Spain herself, but one of the chefs at Ashner’s was from Madrid. He’d cooked comfort food from his childhood for her any time she was nervous or scared about something. She’d earned her love of Spanish cuisine from him.

“Enjoy,” Kenzie said, feeling as sunny as the glossy yolks she set before the woman. She stepped back, conscious that most people didn’t like their wait staff hovering over them like weirdos while they ate.

The woman was so intent on her food that she didn’t seem to notice Loretta and Max, who were also creeping forward to judge the woman’s reaction.

Instead of digging right in, the woman closed her eyes and lowered her head, inhaling.

“Very nice,” she murmured. “I wouldn’t have thought of pine nuts, but I imagine their butteriness will complement the jalapeños nicely.” She turned the pan’s handle so she could examine the dish from another angle.

This woman knew food, Kenzie realized. She’d seen restaurant critics in Ashner’s do the same thing with their dishes before they even took a bite.

After the customer finished her examination of the dish, she unwrapped the sticky paper from her napkin to free the cutlery rolled inside. With the tip of her blunt knife, she pierced one of the egg yolks.

The golden cream oozed over the potatoes…just like a sunrise spilling over the horizon. Kenzie released the breath she hadn’t known she’d been holding.

Kenzie turned back toward the kitchen, satisfied that the dish’s taste would live up to every expectation. A gasp had her spinning back around.

The woman had stopped mid-chew with her fork raised above her eggs. That was the only part of the scene that made any sense. The restaurant had…transformed.

The plastic booths were gone. So were the beige walls and chipped red-and-white tile floor. Kenzie was staring at a scene out of a magazine.

They were on a cobbled patio surrounded by pink and purple flowers. A palm tree swayed lazily in the breeze that smelled like sea salt and sun. The stone balustrade overlooked a cerulean ocean. Kenzie could hear the waves gently breaking on the white sand.

Kenzie reached out her hand to brush the palm tree in front of her. Her fingers went right through the tree, finding nothing of substance except for the plastic tablecloth that she could only feel rather than see.

“How on earth did you do this?” the woman asked, her voice full of wonder.

Kenzie was an excellent cook. She’d been trained by a James Beard Award winner. But even her father couldn’t give someone a transcendent experience through his food.

Don’t be stupid, she told herself. This isn’t the food. It can’t be.

“It feels so real,” the woman breathed. She reached out to touch one of the flowering bushes, but her fingers couldn’t grab hold of anything. As real as the scene looked, they were still in the diner. They hadn’t actually been transported to…wherever this was.

Although it certainly felt real. Too real.

“I’ve never eaten something so good it actually made me feel as if I was elsewhere,” the woman continued. She put another bite of food into her mouth and chewed slowly.

Kenzie glanced at Max and Loretta. From the awed expressions on their faces, it was obvious they were seeing the same thing she was.

This wasn’t just a customer with a fantastic imagination and an appreciation for food. They were all seeing the same illusion.

Loretta was the first to recover.

“Well, we do like to wow our customers,” she said. She wiped her sleeve across her sweaty forehead and gave Kenzie a look that was part disbelief, part admiration, and part fear.

“Yeah.” Kenzie managed a small chuckle. “Here at the Good Ol’ Apple Pie, we want everyone to feel like they’re somewhere—” She grasped for the right word. “Magical.”

Kenzie offered the customer a wobbly smile, trying to reassure both of them. She had no idea what on earth was happening, but one truth was clear. She had to play this whole thing off like this tropical oasis was in their heads…a shared delusion. Because that was the only reasonable explanation for what she’d done.

The only other explanation was preposterous. Impossible.

Charlie and the Chocolate Factory meets The Hunger Games in this mouthwatering, magical, and murderous fantasy.

When Braxton and Kenzie’s paths collide, the result is betrayal, a perilous attraction, and a brewing threat neither can escape unscathed. What begins as a magical cooking tournament transforms into a fight for their lives…where only one can win.

Culinary magic has never been more treacherous, but that doesn’t stop everyone from wanting a slice. The only question is…who will survive past their first bite?

This complete set contains all three books in the Hex Kitchen series. More than 1,500 pages of fantasy, food, romance, magic, and nonstop action. This bundle is perfect for fans of Ilona Andrews, Sarah J. Maas, Patricia Briggs, and Nalini Singh.

Books included in this complete box set are:

“Fazio crafts a deliciously descriptive world that draws you in and will have you hungrily devouring each plot twist. A satiatingly complex and deadly competition, combined with forbidden romance, creates the winning recipe for this culinary fantasy and leaves me craving a sequel.” —Christina Machamer, Hell’s Kitchen champion

“Hex Kitchen presents a magical culinary adventure with a gripping and innovative narrative. The lush detailed descriptions of magical food lures you into the character’s experience as they develop through the fantastical adventure.” —Katherine Hill, Food Network’s Ace of Cakes

Stephanie Fazio is a fantasy author. Stephanie grew up in Syracuse, New York, and prior to writing full time, she worked in the fields of journalism, secondary education, and higher education. She has an undergraduate degree in English from Colgate University and a Master’s degree in Reading, Writing, and Literacy from the University of Pennsylvania.

She lives in Austin with her husband and crazy rescue dog. When she isn’t writing, she’s getting lost in parks, hosting taco nights, or ironically and miserably losing at word games, but having fun while she does it.

For more information, or to sign up for her e-newsletter, please visit stephaniefazio.com.