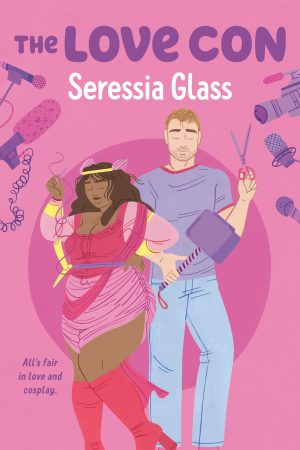 “You wanna give them a try now? I can help you.”

She bent over to unlace her hot-pink Timbs while he knelt in front of her. He noted the casualness of her attire, dark jeans and a fuchsia V-neck T-shirt depicting a grumpy unicorn. He also noted the way the mythical animal’s horn pointed right at her cleavage like a neon sign saying look here.

So, he looked. Looked and lusted and pretended like he wasn’t doing either. If he tipped forward, he’d be nose-to-horn with that unicorn. He’d also be within knee-to-the-chin range, so instead he focused on helping her exchange her Timbs for the platform monster boots, rose to his feet, then offered her a hand up.

The boots gave her a three-inch height advantage. It also gave him a unicorn horn advantage, which he wasn’t going to complain about. He stepped back from her, still holding her hand. “Let’s see you strut your stuff, sweetcheeks.”

She blew him a raspberry, then took a tentative step forward, followed by another. “I think I’m getting the hang of this. Let go of my hand now.”

He did, then watched her prance around their work area like a newborn fawn. Her laughter rang out like a bell. “Look at me, doing my Thanos strut!”

“Good. Now let’s see you sashay your way to the front counter.”

She turned toward the front of the shop, catching sight of the courier who’d just entered. She was easy to spot with her bouquet of bright pink flowers and a large black gift box tied with a matching pink bow.

Kenya turned back to Cam, her mouth a rounded O. It pulled a smile from him as easily as a hot knife through butter. If little gestures rewarded him with big smiles, he’d shower them down on her every day. He nodded, urging her to go on.

Jane sidled up next to him, her cameraman behind her like a one-eyed shadow as Kenya strutted to the counter to accept the vase of pink flowers and the box of gummy snacks. “Looks like you know just what to do to get Kenya to forgive you.”

Cam suppressed a groan and gritted his teeth. He wondered if the producer for the other contestant asked leading questions in an effort to dig up nonexistent dirt. “I don’t need Kenya to forgive me for anything. This was just a way to boost her spirits and show my appreciation for all the hard work she’s done to get this far.”

“You try building two separate costumes in the time frame we have. It’s a helluva lot of stress for anyone. Luckily, we balance each other out. I’m calm when she’s stressed, and she’s calm when I’m stressed. It’s part of why we work so well together.”

A delighted squeal snagged his attention. The courier had gone, and Kenya had opened the black box. He knew what it contained: a collection of stress-relieving gummy snacks and others of her favorite treats. And a card.

Ignoring the producer beside him, he focused on Kenya as she opened the envelope, then pulled the card out. He lifted his thumb to his lips to chew on the nail, awaiting her response as she read the words he’d had written: Sweet treats for the sweetest woman I know. Remember, you got this. And I got you.

Her eyes blazed like stars as she looked at him as if he were the best thing in her entire world. At that moment he believed her. And if he hadn’t already been in love with her, he would have fallen hard when she stumbled into his arms, pressed her cheek against his, and whispered, “I love you, Cam.”

It didn’t matter that she didn’t say she was in love with him. He’d pretend that she did and enjoy the moment.

Sometimes Kenya Davenport believes she was switched at the hospital–how else could a lover of anime, gaming, and cosplay come from STEM parents? Still, Kenya dreams of being able to turn her creative hobby into a career. She finally has a chance to make it big when she joins the reality show competition Cosplay or No Way.

There’s just one catch: the challenge for the final round is all about iconic pairs, and the judges want the contestants’ significant others to participate. Unfortunately, Kenya is as single as can be at the moment. Luckily her best friend, Cameron Lassiter, agrees to be her fake boyfriend for the show.

Roleplaying a couple in love will force them to explore what they’re hiding under the mask of friendship. Can Kenya and Cam fake it until she makes it, or will she be real about her feelings, knowing it could cost her the best friend she’s ever had?