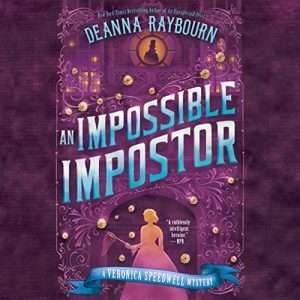 After their dangerous adventures and making new friends in the previous book, Stoker and Veronica enjoy a few weeks of bliss. However, as soon as they return from the royal wedding in Alpenwald, the pair are summoned by Special Inspector Hugo Montgomery, who brings a request of a personal nature to the pair. Soon Veronica and Stoker are off to visit Hathaway Hall where a man claiming to be the presumed dead heir has returned after six years: a man whom Veronica was once good friends. Hugo asks Veronica to determine if the man is who he claims and determine if his intentions may harm the Hathaways.

An Impossible Imposter is another entertaining story in one of my favorite series. I’ve long said what makes this series so wonderful are the characters and the relationships the author builds. These characters whom I adore are tested and stressed in ways they haven’t been before as Veronica’s past resurfaces and secrets are uncovered. Ms. Raybourn does not disappoint as she allows Veronica and Stoker to explore new mysteries and share intimate experiences.

The mystery of the Impossible Imposter isn’t as glamorous as some of the previous tales, but that doesn’t make it any less interesting. I enjoy that while the focus of the story turns once again to Veronica, this time it isn’t about her birthright. While Veronica is determining who he is or isn’t, a very valuable diamond goes missing from Hathaway Hall. The missing valuables don’t much concern Veronica and Stoker, until some nasty thieves come for the pair, assuming they took it from the Hathaways. And once again, Veronica and Stoker find themselves in peril not of their own making.

While overall I enjoyed the story, there are a few things that bothered me. First, Veronica keeps secrets from Stoker. She does try to share them, but either gets sidetracked or decides he’s better off not knowing. Readers know this never works out for the characters, so it’s frustrating when a pair like this, who’ve overcome so much, has to deal with avoidable conflict. Which brings me to another thing – I HATE when a character tries to do the right thing, but is pulled off course because of another. I’m purposely obtuse here to avoid spoilers, but it’s enough to note I was throughly frustrated by the actions of the Impossible Imposter that at times it interfered with my enjoyment of the story (because it stressed me out!)

Narration: The story is shared via Veronica’s first person POV, with the narrator and Veronica’s dialogue one and the same. Ms. Masters alters all dialogue and her range of accents is excellent and sound authentic to this untrained ear, changing it up for regional and socio-economical conditions. Ms. Masters’s performance of Veronica is perfect. She nails Veronica’s no nonsense and adventurous attitude. But she also captures Veronica’s just-under-the-surface vulnerability. Additionally, she gives Stoker a sexy, unfettered gruffness that sharpens with concern when Veronica is in danger or when the pair is sparring. My only small issue this time is that the voice of Stoker and the Impossible Imposter sound very similar, and I had difficulty distinguishing the pair at times.

Overall, I enjoyed An Impossible Imposter. I liked learning more about Veronica’s past and loved seeing how much Stoker adores and admires Veronica. The mystery was good, but not great. I was disappointed at the lengthy post-mystery explanations – I don’t feel every detail was needed. The way the story ended left me a bit unsettled, and I am desperate for the next book!

London, 1889. Veronica Speedwell and her natural historian beau Stoker are summoned by Sir Hugo Montgomerie, head of Special Branch. He has a personal request on behalf of his goddaughter, Euphemia Hathaway. After years of traveling the world, her eldest brother, Jonathan, heir to Hathaway Hall, was believed to have been killed in the catastrophic eruption of Krakatoa a few years before.

But now a man matching Jonathan’s description and carrying his possessions has arrived at Hathaway Hall with no memory of his identity or where he has been. Could this man truly be Jonathan, back from the dead? Or is he a devious impostor, determined to gain ownership over the family’s most valuable possessions–a legendary parure of priceless Rajasthani jewels? It’s a delicate situation, and Veronica is Sir Hugo’s only hope.

Veronica and Stoker agree to go to Hathaway Hall to covertly investigate the mysterious amnesiac. Veronica is soon shocked to find herself face-to-face with a ghost from her past. To help Sir Hugo discover the truth, she must open doors to her own history that she long believed to be shut for good.