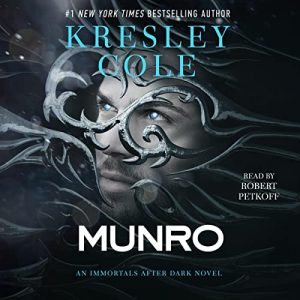 The wait for a new Immortals After Dark book has been a long one (previous book, Wicked Abyss was released 2017). Munro was worth the wait! Cole is a master story teller and pulled no punches with Kereny “Ren” and Munro’s story.

I Iove a good enemies to lovers romance and what better example than a human “monster” hunter and a Lykae (werewolf)?!

Like other males in the series, Munro has been held prisoner in a cell for many years: an evil hoping to use Munro to turn others into Lykae that can used as brainwashed soldiers. But they make a mistake after hitting with the “stick” and try the “carrot”. They bring his mate from another time (yes, time travel shows up this time around). Munro tries his best to save her but fails. So of course he must find a way to her time in order to claim her.

One thing leads to another and the two are together and they spend more time together and actually fall in love with each other. It’s not instant, at least for Ren. Munro falls a little faster since he’s a Lykae pining for his mate. There’s also action and teasers for future story lines. We get to see some series favorites like Lothaire and a very revealing “end credit scene”.

Munro was a fantastic listen and has me keyed up for more from Kresley Cole.

IAD series has always been an audio-only for me, and I was so happy with it was announced that Robert Petkoff was returning to perform Munro. The cover may say it’s read by Robert Petkoff, but that’s an understatement. He gives a full performance with the story and characters. He does extremely well with both female and male voices, and I love his accents with the Scottish Brogue a personal favorite.

IAD series is now 18 books long, so if you are new to the world you ‘could’ read Munro as a stand alone or if you wanted to read about the Clan MacRieve, Munro’s brothers’ HEA leading up to his you could read A Hunger Like No Other, Wicked Deeds on a Winter’s Night, Pleasure of a Dark Prince, then MacRieve. With MacReive and Shadow’s Claim being the most relevant to Munro. But I recommend reading/listening to the whole series.

TORMENTED IN UNIMAGINABLE WAYS
Coming off torture at the hands of his warlock captors, Munro MacRieve never expected to find his mate, or to lose her just as abruptly. Driven to desperation, the ruthless warrior uses his enemies’ own powers to reunite with her—in the distant past.

STOLEN FROM HER TIME
When a crazed werewolf crashes her wedding, Kereny “Ren” Codrina does what any cunning huntress would do: she captures him. Yet she finds herself softening toward the wounded beast—until he turns the tables and forces her into an incomprehensible future.

CAN A HUMAN AND AN IMMORTAL UNITE IN ORDER TO SURVIVE?
As danger mounts, Munro will do anything to make her undying, even sell his soul to an evil sorceress. But first he must convince his fiery mate that she belongs with him. If seduction means her survival, Munro will use every weapon in his arsenal to possess her—forever