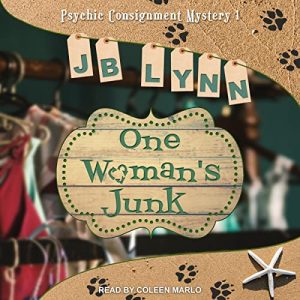 When the woman who raised the three Concordia sisters passes suddenly, Bea, Winnie, and Amanda meet up in Florida to take care of Aunty Letty’s estate, which includes One Woman’s Junk, a consignment shop. After being struck by lightning, Bea and Amanda discover they have some unique abilities, leading them to suspect Aunt Letty’s death was not accidental.

One Woman’s Junk is the first in a new woman-driven cozy mystery series. The thing that makes this unique to other cozies I’ve read is that we are privy to three different POVs; however, I would say that Bea feels like the main character. This first book is filled with world building as we get to know the sisters, see them mend fences, and come together to save the shop. There is no info dumping, but the world-building takes up much of the book.

The three sisters have a lot of baggage. They’ve grown apart over the years, and each is dealing with a life-altering difficulty, making it a good time to possibly start over, together in Florida. However, they often bicker and quarrel as they begin to mend fences.  It bothered me how often middle sister Winnie put down the other two, especially Bea.

When a police detective lets them know that Letty’s been accused of theft, each sister pursues answers along separate paths, but things don’t come together until they acknowledge some of their issues and work together. While they solve the case of the missing purse, the larger issues of what happened to Letty and what is happening to the sisters remains unsolved.

Narration: The story is shared via all three sister’s third-person POVs, with the majority coming from Bea. The narrator remains the same for all POV’s: calm, feminine, and slightly on the deeper side. Ms. Marlo alters all dialogue appropriately for gender and age, with each voice unique enough to identify. Her males voices are deeper and well-performed, and the voice of the little sheep toy is higher-pitched and well-suited for the character. Overall, Ms. Marlo makes the story easy to listen to.

In the end, One Woman’s Junk is the start of what looks to be an interesting cozy series. Much remains for the sisters to figure out, and I look forward to following along.

Letty wanted her ashes scattered under a full moon at the beach, but she couldn’t have known about the lightning strike….or did she?

When their beloved godmother dies suddenly, the Concordia sisters converge on the beach town of Sarasota, Florida to mourn the passing of the woman who raised them. While there, they must scatter her ashes as instructed and decide what to do with her consignment shop, One Woman’s Junk.

Navigating her relationships with her older sisters is hard enough for Beatrice, but after they’re all struck by lightning, things get more complicated in the land of sun and sand. With the power of a newly inherited crystal ring, Bea is suddenly assailed by psychic visions when she touches certain objects.

When her godmother is posthumously accused of having stolen a designer purse (which Bea knows darn well is a knock-off – thank you very much), Bea becomes obsessed with proving her innocence.

Contending with a physical injury, challenging family dynamics, and business headaches, Bea struggles to harness and understand her visions.

With the help of an unusual new “friend” and the sexy carpenter next door, she’s determined to clear Letty’s good name.

But doing so may be a bad decision.

One that could cost her not only her relationship with her sisters…but her life.