Audiobook review: Sealed with a Kiss by Erin Nicholas 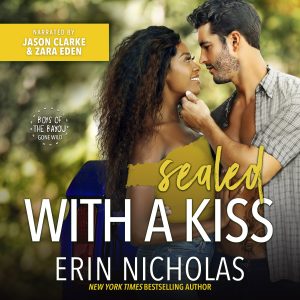 Naomi loves her small hometown on the Louisiana bayou. She also has fallen in love with Donavan Foster, the sexy wildlife rescuer who’s been in town filming for the internet. When a hurricane hits and the pair are trapped together, Naomi finally gets the courage to act on her desires and is pleased to find out Donavan feels much the same.

Sealed with a Kiss is an easy going, friends-to-lovers romance filled with exciting rescues and cute animals. The story picks up after Naomi and Donavan have been working together for months, and since the story is shared from both POVs, the listener understands each has developed strong feelings for the other. The problem: Donavan is only in town for a couple more months before he moves on to his next project. I like that Donavan is upfront about his plans before the pair becomes more than friends.

In fact, I really like that both Donavan and Naomi are honest with their feelings and where things are headed. Overall, I enjoyed that there isn’t a big conflict for the couple. The pair had fallen in love before the book started, but never expressed it. They finally get together and realize they are in love. Neither has been in love before and struggles a little bit to figure out how to express themselves. But the pair work out the bumps by talking to one another and getting some advice from the large cast of supporting characters.

My biggest issue with the title is that while it is a standalone romance and the story is good, there are a LOT of supporting characters who, at times, take over the narrative. I’m guessing a lot of the world building and characters were introduced over the course first three books, and possibly another series. The cast of characters is overwhelming. They sit around shooting the breeze, and often these parts of the story aren’t directly related to the primary couple. I found myself lost and/or loosing interesting during a couple of these times because I felt overwhelmed and unfamiliar with the folks.

Narration: The story is shared via the third person alternating POVs of Naomi and Donavan. Ms. Eden uses an upbeat voice for her narrator, altering dialogue, including Naomi, primarily based on gender, but also for age. She adds a very slight southern accent to Naomi, but nothing significant. She does deepen her voice effectively for male characters. I didn’t particularly like how Ms. Eden ended her sentences at times: she seems to soften it or draw out the final word. Mr. Clarke has a gravely, deep voice, giving Donavan a very sexy vibe. His female voices (most notably Naomi) are softer and distinguishable, although many of the supporting characters sound nearly the same.

In the end, Sealed with a Kiss is a good story – happy and breezy and low on conflict. It’s a small town romance with lots of nosey friends and adorable animals. If you enjoy Jill Shalvis’s Animal Magnetism series, this is for you. My biggest issue is that there are A LOT of side characters and at times I felt overwhelmed. The story and romance are sweet, and the animals are everything.

My Ratings
Story: B
Narration:
Clarke: B+
Eden: B-

But when she’s stuck in a storm with Donovan Foster, the hot, charming, wild-life rescuing internet sensation, and she finally gives in and kisses him…and a few articles of clothing end up on the floor…suddenly her simple, quiet life is tossed upside down.

Especially after the paparazzi catches a heat-of-the-moment kiss. Now everyone assumes she’s his girlfriend and, when she realizes that’s the best way to keep Donovan out of trouble, Naomi agrees to play along. Even though it puts her center stage with her private life in very public view. Again.

They’re a whirlwind of opposites-attract chemistry the fans love, but they’ll surely blow over faster than a Gulf Coast hurricane. As long as they can keep straight what’s real and what’s just a once-in-a-lifetime fantasy.