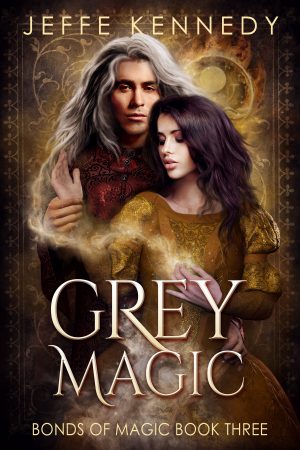 Once again, she was in her alternate form. A creature Gabriel had described as a silver phoenix, which wasn’t something she’d ever heard of. She’d really like to get a look at herself in a mirror and compare the image to the book he’d mentioned seeing it in. Convocation knew the House Phel library had all sorts of oddities secreted away, as did the house itself, along with its lone wizard.

But that would have to wait. All she knew was her vision was very different—more acute and also disconcertingly… globular. Sounds came through vividly and smells did not. She shifted, feeling the thousands of pinpricks where her feathers protruded from her skin, each exquisitely sensitive. That would take getting used to.

Gabriel, sharply delineated in grayscale with a magical aura that radiated well beyond the confines of the arcanium, gazed on her with a smile so satisfied she’d call it smug on anyone else. For him, however, she knew the bland expression covered a wealth of relief. She’d love to find a way to prevent him from worrying about her so much. It simply wasn’t natural for a wizard. The typical Convocation wizard took their familiar for granted for a good reason: so they could focus on more pressing concerns. If Gabriel faltered in the defense of House Phel because he was distracted thinking about her safety… well, it didn’t bear considering because she’d make sure that didn’t happen.

Gabriel laid a hand on her feathered breast, the silver net of magic tightened on her again, inexorable and impossible to resist. The contraction of pleasure-plain wrenched through her, and she returned to human form. Naked.

Planting her hands on her hips, she glared at Gabriel. “Forget something?”

He gaped at her in dismay—and the beginnings of debilitating guilt. “What happened?”

Though he wasn’t asking her, she answered before he could go into a spiral of doubt and defeatism. Wizards shaped magic with their minds, so belief in themselves was critical to successful incantations. There was a reason the most arrogant wizards were the most powerful. “If you wanted to get me naked, all you have to do is ask, wizard,” she murmured, deliberately striking a seductive pose.

His jaw firmed, wizard-black eyes sparking with indignation. A much better emotion for him to work with. “I wasn’t trying to—”

“What were you trying to do?” she interrupted. “What did you picture when you summoned me back to human form?”

Puzzled, he knitted his brows. Then his face cleared. “I was thinking of how it worked before.”

“All right then. So, put me back in alternate form and this time when you summon me, be careful with the details.”

“Wait a moment.” He held up a hand, his frown deepening. “If I have this much control over how you return to your natural form, then I must have similar influence over sending you into your alternate form. What if I do something wrong and harm you?”

His Darkness, Her Brightness… Together They Defy the World