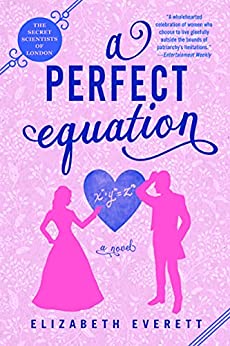 I love a well-written smart book, with a great storyline and strong characters; Ms. Everett does a great job with these things. It was true in A Lady’s Formula for Love and it remained true for A Perfect Equation. Letty and Grey are a great match with a ton of baggage and plenty of chemistry to set that baggage on fire. Of course I expected nothing less than unexpected fires and other minor chaotic episodes at Athena’s Retreat, and true to form, Ms. Everett did not disappoint. The characters remain charming, colorful and quirky, the issues they face in many ways as relevant today as they were then, the heroes reluctant and the heroines smart, quick-witted and sharp tongued unafraid, mostly to say what needs saying when it needs saying. All in all A Perfect Equation made for a great snowy, cuddle-up-under-the-blankets-while-the-snow-falls-down read.

That said, I had a few issues; I am not a math and science person, not that I don’t appreciate both and understand our need for them, but they are not places my brain is overly comfortable hanging out. Maybe it’s because I caught myself on fire in high school Chemistry class or because I had to be tutored through all my Algebra classes but the mixing of letters and numbers, the equations, terms and theorems leave me grumpy and with a headache, and this was no different in this book. I understand that Athena’s Retreat is a club for ladies who study math and science, but as a reader I don’t need deep details of various theorems to understand the storyline or to learn to love the characters. In A Lady’s Formula for Love, I felt like Ms. Everett gave me the perfect amount of information in reference to science that I understood where her passion was and how it drove her. But in A Perfect Equation, I felt like so much math was thrown at me, especially in the beginning, that it weighed the storyline down and prevented me for truly investing in the characters. I understand that math brought Letty to Athena’s Retreat and that the retreat saved her, but fewer math lectures would have been appreciated, and because of this I dropped the grade from an A to a B.

If you love math and science and understand the lengthy explanations, I don’t feel like this would be a deterrent to you, and perhaps if the lectures had been broken down and scattered throughout the novel they wouldn’t have been for me. But given the way the information was presented I felt frustrated, overwhelmed, and nearly quit the novel because of it. I’m glad I didn’t quit because things did pick up, and all the lovable characters and beautiful relationships I had experienced previously were brought back and expanded on while allowing me to get to know some new characters and enjoy Letty and Grey’s relationship, which was delightfully nuanced and multilayered.

Overall, Ms. Everett did a beautiful job with A Lady’s Formula for Love. It explores the danger of hyperbole, corruption, greed and mob mentality, and how it trickles and even floods society, and the effect it can have on change or lack of change. She also does a wonderful job of exploring themes like redemption and love, not only between Letty and Grey, but also between other characters, and that made for an emotionally-charged read filled with a rainbow of personalities and people. Oh, and for those looking for well written forbidden kisses that lead to a whole lot more, Ms. Everett won’t leave you disappointed.

How do you solve the Perfect Equation? Add one sharp-tongued mathematician to an aloof, handsome nobleman. Divide by conflicting loyalties and multiply by a daring group of women hell-bent on conducting their scientific experiments. The solution is a romance that will break every rule.

Six years ago, Miss Letitia Fenley made a mistake, and she’s lived with the consequences ever since. Readying herself to compete for the prestigious Rosewood Prize for Mathematics, she is suddenly asked to take on another responsibility—managing Athena’s Retreat, a secret haven for England’s women scientists. Having spent the last six years on her own, Letty doesn’t want the offers of friendship from other club members and certainly doesn’t need any help from the insufferably attractive Lord Greycliff.

Lord William Hughes, the Viscount Greycliff cannot afford to make any mistakes. His lifelong dream of becoming the director of a powerful clandestine agency is within his grasp. Tasked with helping Letty safeguard Athena’s Retreat, Grey is positive that he can control the antics of the various scientists as well as manage the tiny mathematician—despite their historic animosity and simmering tension.

As Grey and Letty are forced to work together, their mutual dislike turns to admiration and eventually to something…magnetic. When faced with the possibility that Athena’s Retreat will close forever, they must make a choice. Will Grey turn down a chance to change history, or can Letty get to the root of the problem and prove that love is the ultimate answer?