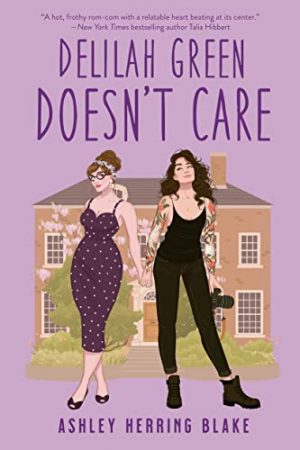 Guilted into returning to her hometown of Bright Falls to photograph her step-sister’s wedding, Delilah Green’s only hope of surviving the ordeal is to focus on the desperately-needed paycheck she’s going to receive for her efforts. And maybe wreak a teensy bit of havoc on the “family” that made her feel so alone and invisible. But, when retribution turns into romance she realizes that she hasn’t truly been living at all, and that home can change right along with the heart—if she’s brave enough to give it another chance.

I wasn’t sure where to start with this review, because there was so much about this story that I really liked. Delilah Green Doesn’t Care, by new-to-me author Ashley Herring Blake was one of the best surprises I’ve had as a reader in quite a while. Funny throughout, sweet in all the right places (and not sweet in plenty of others), I had a great time reading this story, and enthusiastically recommend it.

As with all stories about relationships, time is a key factor of the conflict in Delilah Green Doesn’t Care. These characters’ hurts were inflicted during childhood and/or as teenagers, deepening and becoming increasingly fixed as they entered adulthood. For Delilah, it makes the title something of a chameleon, shifting with her evolving awareness from a disposition of longstanding habit to wishful thinking as she grapples with needing more than a string of hookups with like-minded strangers.

Romance was absolutely one of the best things about Delilah Green Doesn’t Care. Though it is sometimes wonderfully explicit (I don’t generally like “heat ratings”), the main aspect of Delilah and Claire’s story that kept my nerves singing was the wanting they shared. Desire, sharp and lovely and staccato from too many interruptions is a constant note sounding between them, and I found it impossible not to appreciate the significance of that yearning crashing into Delilah’s life when she’d spent nearly all of it endeavoring not to need anyone.

As families are complicated things, Delilah’s relationship with her step-sister was just as much a presence in the narrative to me as the romance. Generally, I believe there’s an inevitability of misunderstanding when all the words fail and no one knows what to say. In Delilah and Astrid’s case, their truths are buried in years of silence and forgotten pages, resulting in a carapace of guilt and hurt that nothing could heal until both characters are shattered in their respective ways.

Overall, I loved Delilah Green Doesn’t Care. It is sad and funny and breathless and full of possibilities. I appreciated that these characters aren’t teenagers, but adults with responsibilities, kids, mistakes under their belts, hopes yet unrealized, and so on. They’ve learned the hard way that living for others, whether in appeasement or avoidance, is exhausting business. (As an aside, I should mention that I kind of adored Iris.) Wounded, but steady amid the chaos as she’d hoped, I think Delilah’s story gets an exceptionally good ending that’s worth revisiting very soon.

Delilah Green swore she would never go back to Bright Falls—nothing is there for her but memories of a lonely childhood where she was little more than a burden to her cold and distant stepfamily. Her life is in New York, with her photography career finally gaining steam and her bed never empty. Sure, it’s a different woman every night, but that’s just fine with her.

When Delilah’s estranged stepsister, Astrid, pressures her into photographing her wedding with a guilt trip and a five-figure check, Delilah finds herself back in the godforsaken town that she used to call home. She plans to breeze in and out, but then she sees Claire Sutherland, one of Astrid’s stuck-up besties, and decides that maybe there’s some fun (and a little retribution) to be had in Bright Falls, after all.

Having raised her eleven-year-old daughter mostly on her own while dealing with her unreliable ex and running a bookstore, Claire Sutherland depends upon a life without surprises. And Delilah Green is an unwelcome surprise…at first. Though they’ve known each other for years, they don’t really know each other—so Claire is unsettled when Delilah figures out exactly what buttons to push. When they’re forced together during a gauntlet of wedding preparations—including a plot to save Astrid from her horrible fiancé—Claire isn’t sure she has the strength to resist Delilah’s charms. Even worse, she’s starting to think she doesn’t want to…