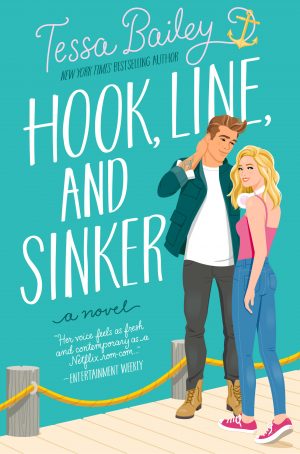 I loved everything about Hook, Line and Sinker by Tessa Bailey! It pulled on all my romance reader strings, funny, sweet, sexy and heartbreaking at times.

Fox and Hannah pick up their story from the first book, It Happened One Summer which featured Hannah’s older sister and Fox’s best friend. These two were great supporting characters, but they needed to grow into their leading roles (it’s a thing Hannah wrestles with, being a supporting character in life but not the leading lady.)

Hannah is the youngest of the Bellinger sisters, and she has been trying to make her way in the film industry without using her stepdad’s name (he a famous producer). Hannah loves all things music and wants to put that passion into creating soundtracks for films. But she doesn’t have the confidence to ask for more at work, settling for her PA job as errand gal to the actors and director she’s had a crush on for the last two years.

Fox is a hardcore playboy who works as a relief captain on his best friend’s fishing boat. He doesn’t like commitment, only hooking up with a different woman and when his friends what’s him to take over as captain of the ship so he can start another crew with a new boat, Fox passes. But ever since meeting Hannah last summer, Fox has given up his playboy days even if no one believes it. Mostly because he’s kept that fact to himself. The guys on the fishing crew still thinks he goes to Seattle for his weekend hookups. Brendan, the best friend and captain doesn’t know and when Hannah is coming to stay in Westport for work, he warns Fox off of his soon to be sister-in-law.

The thing is Fox and Hannah has been texting each other for the last 6 months and have become great friends. Sure there’s a sexual chemistry between them but they both agree they need to stay clear of anything physical. Plus there’s that 2 year crush Hannah has had on the director she works with.

Hook, Line and Sinker is full of heartbreaking moments with Fox over coming his past in order to be the man he believes Hannah deserves. I wanted to hug him some hard at times! If you’re looking for a great friends-to-lovers romance with humor, heart, and some spice, pick up a copy today! While this is the second story in the series, it can be read alone, but I recommend reading both books.

King crab fisherman Fox Thornton has a reputation as a sexy, carefree flirt. Everyone knows he’s a guaranteed good time–in bed and out–and that’s exactly how he prefers it. Until he meets Hannah Bellinger. She’s immune to his charm and looks, but she seems to enjoy his… personality? And wants to be friends? Bizarre. But he likes her too much to risk a fling, so platonic pals it is.

Now, Hannah’s in town for work, crashing in Fox’s spare bedroom. She knows he’s a notorious ladies’ man, but they’re definitely just friends. In fact, she’s nursing a hopeless crush on a colleague and Fox is just the person to help with her lackluster love life. Armed with a few tips from Westport’s resident Casanova, Hannah sets out to catch her coworker’s eye… yet the more time she spends with Fox, the more she wants him instead. As the line between friendship and flirtation begins to blur, Hannah can’t deny she loves everything about Fox, but she refuses to be another notch on his bedpost.

Living with his best friend should have been easy. Except now she’s walking around in a towel, sleeping right across the hall, and Fox is fantasizing about waking up next to her for the rest of his life and… and… man overboard! He’s fallen for her, hook, line, and sinker. Helping her flirt with another guy is pure torture, but maybe if Fox can tackle his inner demons and show Hannah he’s all in, she’ll choose him instead?

Reviews in the Series:
It Happened One Summer by Tessa Bailey (Bellinger Sisters #1)