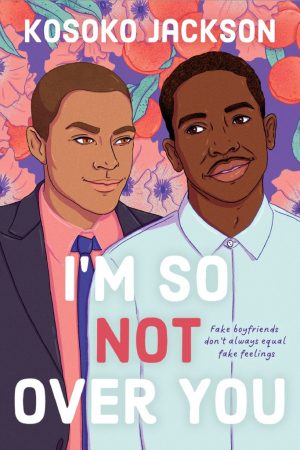 I’m So (Not) Over You
Author: Kosoko Jackson
Reviewer: B.
Rating: B-

Having recently earned his degree in journalism and sociology, Kian Andrews is ready to conquer the world. Except for the lack of job prospects. And the massive amount of college loan debt. And the broken heart he’s still trying to ignore after his affluent, gorgeous ex-boyfriend, Hudson Rivers, dumped him without warning three months ago. At least Kian isn’t the type to fall in love with said ex again when he calls begging for a favor only Kian can do—right?

I was so excited to receive this ARC from NetGalley for review! Kosoko Jackson is a “new-to-me” author, which is always a draw, and I’m So (Not) Over You was a welcome introduction. Told exclusively from Kian’s perspective, it is a very busy narrative, delving into issues of wealth, privilege, and race, as well as all the complications, both general and unique, that romance can bring.

While I enjoyed I’m So (Not) Over You a great deal, I did have a little trouble with a few scenes, some of which may admittedly be my fault. The story is written in first person present tense POV, which I always find uncomfortable for some reason, but that’s my problem. Something that did keep bothering me, however, was the lack of transparency regarding Kian and Hudson’s initial breakup earlier on in the narrative. This is a “second chance” romance, so I very much wanted to understand what happened the first time better. As the story progresses, there are acknowledgements of things that ought to have been said on Hudson’s side, and things that ought not have been said on Kian’s, but there’s not a specific tipping point explained that started the whole thing. In the end, both characters make heart fluttery promises for the future, but the initial causes of their breakup aren’t completely clear.

Another point that I had mixed feelings about was the exchange during the most pivotal argument of the narrative between Kian and Hudson’s sister, Olivia. One of  greatest strengths of I’m So (Not) Over You, I believe, is the backbone of the Rivers family matriarchal line. These women are the real forces behind the family’s continued dominance and affluence—Hudson’s Grandmother, in particular, is delightfully and undeniably terrifying—so I was never able to fully get Olivia’s verbal attack on Kian, especially given their conversation in the final chapter of the novel.

Those concerns aside, there are plenty of things in I’m So (Not) Over You to enjoy. If you like your Rom-Coms with pop culture references, you’re in luck, because there are so many that readers will need waders for this story. But, in this author’s hands, I thought they were a lot of fun. In some respects, Kian is sort of a goofball (as are the other characters he holds dear), which I loved because it’s not an overtly advertised aspect of his personality. It’s endearing. Regardless, my various watchlists will be screaming at me for quite some time, though I made the additions to them happily enough.

Also wonderful are the secondary characters. Kian’s best friend, Divya, is absolutely amazing, as is his brother, Jamal. Hudson’s Grandmother, as mentioned above, is one of my favorite parts of the whole story. Even Hudson’s sister earned a healthy wariness from me, in part because she’s such a thoroughly ruthless sibling. This author also writes wonderfully detestable villains, which made hating them a pleasantly uncomplicated affair.

Even though the issues with the ARC I received went beyond typos and actually interfered with the narrative to a point, there was a lot more about this story to like. Hudson in a romantic mood is top-notch swoony, just to start. Kian and Hudson’s love story is both painful and complicated—as all good love stories tend to be. Ultimately, I’m So (Not) Over You is as funny as it is sweet, and the desire to snarl at both protagonists until they got out of their own way was highly enjoyable. Regardless, Kosoko Jackson is an extraordinarily promising romance author, and one I’ll definitely be keeping an eye out for in the future.

It’s been months since aspiring journalist Kian Andrews has heard from his ex-boyfriend, Hudson Rivers, but an urgent text has them meeting at a café. Maybe Hudson wants to profusely apologize for the breakup. Or confess his undying love. . . But no, Hudson has a favor to ask—he wants Kian to pretend to be his boyfriend while his parents are in town, and Kian reluctantly agrees.

The dinner doesn’t go exactly as planned, and suddenly Kian is Hudson’s plus one to Georgia’s wedding of the season. Hudson comes from a wealthy family where reputation is everything, and he really can’t afford another mistake. If Kian goes, he’ll help Hudson preserve appearances and get the opportunity to rub shoulders with some of the biggest names in media. This could be the big career break Kian needs.

But their fake relationship is starting to feel like it might be more than a means to an end, and it’s time for both men to fact-check their feelings.