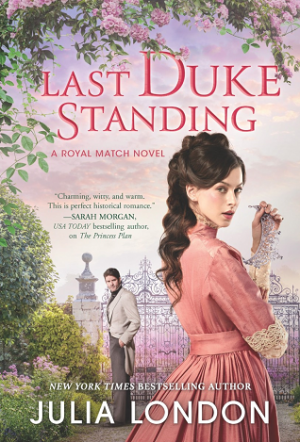 Okay, I’m just going to say this upfront – there was no duke, so I’m not certain why this book is called Last Duke Standing. I mean, main character William is heir to a dukedom, but he’s not a duke and to my recollection, none of Justine’s other suitors are dukes either. That aside, Last Duke Standing is a solid enemies-to-lovers romance. Although the first in a new series, it is a spinoff of A Royal Wedding series, set about eight years ahead in time from the conclusion of the final book.

Justine is to become queen and ruler of Wesloria. Her mother and the Prime Minister mean to manage her by marrying her off to someone of their choosing. Justine, along with her younger sister Amelia, is shipped off to England to learn the ropes of being a queen from Queen Victoria and find a suitable husband with the help of renowned matchmaker, Lady Lila. William is to watch over the whole affair and report back to the Prime Minister as a favor made by William’s father.

I love that William and Justine have a history: a scandalous incident eight years prior when she was in London. He shoved her in a game of chairs and there was a scene. This history, and the fact that neither wants to be part of what is happening, puts the pair at odds from the start. Their bickering turns into amusement. Their attraction turns into lust. They make bets with the prize of kissing… it doesn’t make any logical sense, but adds tension and fun.

I didn’t care for Justine at first. She comes across as self-important, but it’s more that she’s tired of being told what to do and how to live. She’s tired of being looked at as not good enough and looked down upon for her one horrible indiscretion. William is an odd duck, pushing Justine into clandestine moments when he doesn’t really like her.

I love how William thinks Lila hasn’t a clue how to matchmake since the prospects presented are horrible matches. Lila goads William knowing that he and Justine are the perfect match, but Lila must foster their feelings until the pair comes upon the discovery on their own.

Overall, Last Duke Standing is an entertaining story. It felt a little long at times, but the last half of the book really picked up. I enjoyed the story more as the pair grew closer and confided in one another. I love the closing thought: “It was astonishing—all it really took was for someone to believe in her to give her permission to believe in herself.”

When Crown Princess Justine of Wesloria is sent to England to learn the ropes of royalty, she falls under the tutelage of none other than Queen Victoria herself. Justine’s also in the market for a proper husband—one fit to marry the future queen of Wesloria.

Because he knows simply everyone, William, Lord Douglas (the notoriously rakish heir to the Duke of Hamilton seat in Scotland, and decidedly not husband material), is on hand as an escort of sorts. William has been recruited to keep an eye on the royal matchmaker for the Weslorian prime minister, tasked to ensure the princess is matched with a man of quality…and one who will be sympathetic to the prime minister’s views. As William and Justine are forced to scrutinize an endless parade of England’s best bachelors, they become friends. But when the crowd of potential grooms is steadily culled, what if William is the last bachelor standing?