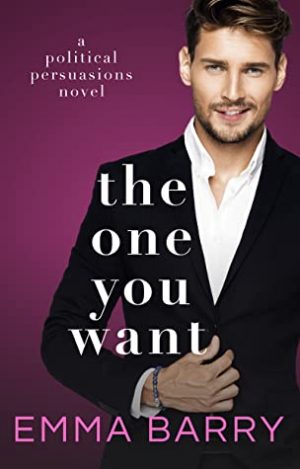 The One You Want
Author: Emma Barry
Reviewer: Jen
Rating: B

Millie and Parker both work in Washington DC politics, and they are generally on the same side of the aisle – she represents labor unions and he is on the Democratic Senate Majority Leader’s staff. He is trying to get a deal with the Republican-held Congress to pass a budget, but one of the issues is worker’s wages, which impacts the unions.

Although I’m not a big fan of politics, I enjoyed The One You Want. Granted, the main characters fall on the same side of the political spectrum as I do, which made the political discussions tolerable. I liked that we get a peek into the politics because it is such a part of the characters’ lives. But we aren’t tossed into lengthy political discourse just for the sake of making it a political story.

Millie was recently a victim of a hostage situation and hates the attention she receives from the media. Deciding to put it behind her, Millie goes out with friends where she meets the polished Parker. They connect, but when she hints they should leave together, he turns her down. A week later, they meet again in a professional setting. Sparks continue to fly, and eventually, Parker finally decides she’s worth the effort.

Their romance is very back and forth, up and down. Parker wants a relationship like his grandparents had, but he’s not found the right person and thinks he’ll only hurt Millie in the end. Millie is dealing with the emotional scars left from being held hostage and thinks she’ll never be enough for Parker. I love when Parker decides Millie is worth it and asks her out on a real date – it’s awkward and funny, but he shows Millie he’s serious about her.

I like how we see both slowly come to middle ground when it comes to their underlying emotions and thoughts. Their mutual attraction keeps them working at the rest… listening to the other and understanding what is work and what is passion. They continue to have ups and downs, but each eventually realizes what they have is worth it.

In the end, I enjoyed reading The One You Want. Millie and Parker are passionate individuals. I love that they are both flawed and recognize they need to work on things. Their courtship is both fiery and sweet.

Union organizer Millie Frank doesn’t like the spotlight. But when an oh-so-traumatizing hostage situation makes her front-page news, she’s forced to take the lead on an important negotiation…putting her directly in the path of Capitol Hill’s most arrogant playboy.

Parker Beckett will do whatever it takes to close a deal for his senator boss. He’s a pragmatist down to his bones, and he doesn’t have time for naive do-gooders, even if he can’t get Millie’s wounded eyes out of his head.

Parker can’t understand how Millie has kept her idealism in this town. Millie can’t believe what Parker’s willing to sacrifice to pass a budget. As they navigate their political differences, what grows between them looks a lot like a relationship…and maybe even a little like love.