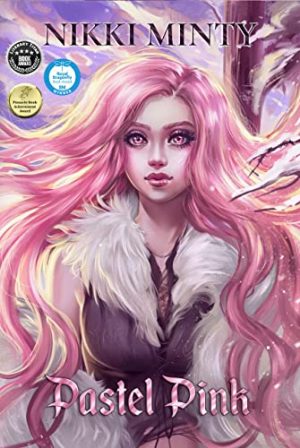 I squint. Tall trees shadow the forest floor, making it almost impossible to see where I am going. I pause to listen. There’s a rustle of leaves coming up behind me.

“Harlow.” A poke to my shoulder causes me to flinch. “Hurry up.”

My sister Floss is impatient; she doesn’t like it when I dawdle. “We need to be out of here before sundown, or we’re as good as dead.”

Goosebumps prickle my arms. Her words hold far more weight than she realises.

Ever since I was a child, I’ve been burdened by human visions, this one of Ruby and her final moments on Earth being the most disturbing of all.

The topic of humans is a great debate among Zeeks. While Zeeks as a whole, believe in reincarnation, not all Zeeks believe we’d once lived as humans. As far as the non-believers are concerned, Zadok is the only planet we regenerate on, and humans are fictional characters, which have been written about in storybooks for the joy of us SCI-FI lovers. My sister, in particular, is a firm non-believer. She taunted me about my visions when we were children, and although I keep my mouth shut about my visions these days, she still finds other ways to taunt me.

The burn of a sharp object scrapes against my calf and I wince. “I need more light,” I say.

Floss huffs, rummages through her sack, and hands me a zoft, which is a small purple glowing crystal. “What you need is a better set of eyes.”

Like many other Zeeks in our colony, Floss treats me as inferior. Her magenta-coloured hair and irises make her physically superior. I’d not been so blessed; I was born with pastel-pink hair and irises. A sign of weakness, or so they like to remind me. The lighter the pigment of the iris, the worse the eyesight. Sadly, there is no way of arguing it. My eyesight isn’t great, and my body strength isn’t the best either, but I’m not as ill-fated as others. Some of the paler, less fortunate Zeeks are born blind.

“Well, if you happen to be attacked by a fuegor, and I manage to survive, I’ll pinch yours,” I say.

Floss snorts. “I’d rather the fuegor eat them.”

I think it’s safe to say that Floss isn’t fond of me. She believes I’m an embarrassment. I am the only non-Magenta Zeek in our family—shame on me for being born this way.

“You know, you’re right,” I reply. “Let the fuegor take them, why aim for magenta eyes when I can aim for purple.”

Floss hates it when I bring up the word “purple”. Being a Magenta, she has it over me, but when it comes to Zeek status, she’s only second rate. Purple Zeeks are at the top of the ladder.

The rumble of a fuegor growl echoes through the trees, sounding a little too close for comfort. Daylight is dwindling, which means our nocturnal friends have risen, and are ready to hunt.

Floss reaches for her blade. “I’m refusing to work with you again,” she says, eyebrows furrowed. “It’s only a matter of time before you get us both killed.”

My eyes dart in her direction. “Why blame me? I only stopped once. You stopped a dozen times.”

It doesn’t matter whose fault it is I get the blame—it’s always the same story—not only with Floss, with everyone. Pick on the Pastel. I hate it.

“So, I made a few quick stops.” She uses her fingers to flick droplets of water at me. It’s a neat trick—and one I’ll never be capable of—but it’s certainly not as impressive as the sharp shards of ice I’ve seen flying from the fists of an angry Purple. “Your one stop cost us thirty minutes.”

I pull out my rattan and jab her sack. “Hey,” I say, voice harsh. “I cut down four big bunches of degs in that thirty minutes. If it wasn’t for me, our sacks would be near empt—”

“Shhh…” Her finger rises to her mouth, forcing me to stop short. “I hear something.”

Doing as I’m told, I remain silent and listen. A twig snaps close by, followed by the sound of a low drawn out snarl. I clasp my rattan tighter, my breath catching in my throat. A fuegor.

I glance at Floss and her eyes meet mine, large with alarm. “RUN!”

I don’t need to be told twice. Adrenaline kicks in, driving my weak body forward. I hold the zoft out ahead, but the light it gives me is insufficient. Or perhaps it’s my eyes that are insufficient, either way, it’s difficult to see any further than two feet in front of me at a time. My heart pounds erratically inside the wall of my chest. This scene is sickly familiar. Flashes of Ruby re-enter my mind. We are the hunted. We are the prey. We are running blind.

Being pursued by a predator through the forest is something I’ve feared would happen from the first moment I got this job. I never wanted to be one of the fruit pickers, and I certainly hadn’t wanted to work with Floss. Picking fruit with Floss reminds me of picking mangoes with Jade, only this lifetime around my twin sister is not my friend; she is my foe. And this forest—even though the trees are quite different—reminds me of the bush at the back of my parent’s old property. It reminds me of being chased down and murdered.

A loud growl erupts close behind me, and within an instant, the fuegor’s razor-sharp teeth sink viciously into the meaty section of my calf. A burst of searing pain causes me to see stars, and I trip mid-stride, dropping my zoft.

“HELP!” I thrust my rattan back as I fall, hoping to hit the fuegor. It misses, falls, and is now lost to me in the darkness of the scrub.

From one ending comes a new beginning…

Ruby was murdered on Earth eighteen years ago and reincarnated on Zadok as a Pastel Zeek named Harlow. To be born at the bottom of her race’s caste colour system to a middle-class family of Magentas has made Harlow a source of conflict amongst the ruling Purples, and a source of derision from all three colours.

When Harlow is attacked by a fuegor on Zadok, the effects of its slow reacting venom triggers an unforeseen phenomenon, and due to the strong connection she had with her former twin sister Jade, her human spirit is unexpectedly drawn back to Earth.

Now living a double life, she has plunged into a world of intrigue on both planets.

On earth, she watches on in horror as Jade reconnects with Lucas, the man who murdered her and got away with it. And to complicate things further, she’s being pursued by Alex, the ghost of Lucas’ twin. On Zadok, she becomes embroiled with Jax, the son of the Commanding family. He’s determined to bring about change to the colony’s colour system, but it’ll come at a cost.

As Harlow mixes with the political intrigue of the Zeeks, will she become a victim of those trying to rigidly maintain the status quo or will she usher in a revolution?

And will ghost Ruby resist the temptation of the handsome Alex or pursue an impossible relationship that could have dire consequences on both planets?