Audiobook review: Child of Mine by Karen Grey 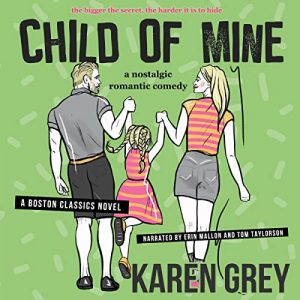 Seven years before the story begins, daytime star Isabella York decides to leave her soap opera for something new. When she spots sexy Henry at a party, she decides to have one last fling before leaving. Fast forward to 1989, Bella works at the family bookstore and performs Shakespeare in Boston. She lives with her mom, who helps her raise her daughter, Lilah. She never knew who Lilah’s father was or why he left suddenly, but when she runs into him on the job, sparks reignite.

Henry was on the fast-track to becoming a TV producer, but when his dad died suddenly, he moved home to Raleigh to help his family. Now it’s time for him to move on, and he takes a job at a local Boston TV station where he runs into his childhood crush and one-time lover, Izzy, aka Bella.

Child of Mine is a delightful second-chance retro romance. Listeners of the Boston Classics series are familiar with Bella and her daughter, but now we get the chance to learn more about this quiet star. Bella has a lot of skeletons in her closet and tries to fly under the radar. Seeing Henry shakes up her world and creates delightful tension. I admit, I was frustrated with Bella and her inability to tell Henry he’s a dad, but her actions are very true and realistic. The internal debate over letting Henry into her life tore at my heart.

Even though Henry doesn’t deal well with kids, watching him meet his daughter and learn how to be her dad is touching. There are so many tender moments; I loved that he didn’t always get it right but kept trying. I also appreciate that he knows a future with Bella and Lilah is all he wants, yet he gives Bella time to face her demons and come to him on her own terms.

I did struggle for a bit with the fact that Bella has two “personalities” within her: an “angel” and a “demon,” named for the two acting parts from her youth. She would have full-on conversations and arguments with these voices, which was confusing at times. I didn’t care for it, but overtime, as Bella gained strength, the voices altered and unified becoming her own voice.

Narration: The story is shared via the first person alternating POVs of Bella and Henry, with Erin Mallon (EM) narrating Bella’s POV and Tom Taylorson (TT) narrating Henry’s POV. EM has youngish voice, with just a bit of rough edge to it, which fits Bella‘s “I had a hard youth” life. EM alters her dialogue voices slightly enough to distinguish between who’s talking but not enough to say this is this character or this is that character. Her males are slightly deeper-enough to know that it’s a man talking.

TT gives performs Henry’s voice with a deep, but not gravely deep, base. He has a soft edge to his voice, which makes it very comfortable sounding. TT adds a slight southern accent for Henry’s dialogue. His females were softer and higher pitched. Overall, I liked TT’s voice, but it was hard to differentiate the dialogue between characters of the same gender.

Overall, I enjoyed listening to Child of Mine. Bella and Henry get a second chance at love and a family. I love that things aren’t perfect and both characters acknowledge it won’t always be easy, but that they are looking forward to a future.

The bigger the secret, the harder it is to hide.

Single mom Isabella York was a celebrity before she had her first kiss, her first date, or her first sip of alcohol. Playing the bad girl—both on and off the set—made up for lost time, but the consequences were life-changing. Back home in Boston, with her “checkered past” behind her, all she wants is to raise her little girl far from the spotlight. After all, revealing her secrets could mean losing everything.

For her, and her daughter.

It’s not that Henry Smith hates kids—they don’t like him. Meanwhile, he’s stuck producing children’s TV, so he’s doing the best he can to be less of a grouch. Not everyone gets a second chance to chase his dream, and if he plays his cards right at this new gig, he can move on to making television that will change the world, not just entertain a bunch of brats.

Even better, he just might be able to talk the woman he never thought he’d see again into greenlighting a do-over.

In this sexy, heartwarming, Secret Baby, 80’s throwback romcom, a Sunshine-Grumpy pair has to face the past before they can find their future… together.